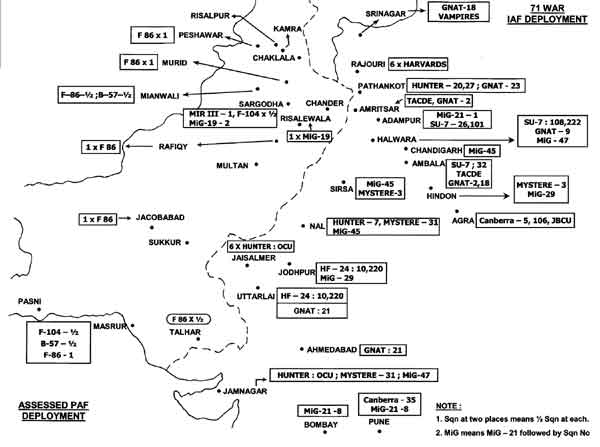 The IAF had nearly seven months to gear up operationally. This is a luxury seldom available before going to war. Operational training was therefore, stepped up. Pilots on training and staff duties were routed back to the squadrons well in time to thoroughly acquaint themselves with the aircraft and likely area of operation. Squadrons were earmarked for each Tactical Air Centre (TAC) well in time. Air support exercises were undertaken with the concerned formations to iron out weaknesses in the system and to exercise concerned appointments and make them thorough in their equipment and procedures. The pilots participating in the exercise got acquainted with the terrain, as well as built up necessary rapport with the Forward Air Controllers (FAC). The latter, as far as possible, worked with their squadron colleagues, thereby generating a great deal of confidence. New techniques were tried out to indicate the position of target to the strike pilot, as well as help identify our own armor. One was the use of a powerful searchlight aimed at the pilot to indicate FAC’s position. The other was a cloth panel, bright in color and cross-shaped, to be spread over and across the tank to indicate friendly tanks.

The correct procedure for air support was highlighted to the army officers at all levels. They were indoctrinated against demanding specific number of sorties, but educated to specify the target and task for the IAF.

The FACs were attached with respective army formations and had plenty of time to familiarize themselves with their area of operation. Frequent exercises ensured serviceability of the R/T sets. Incorporation of an additional aerial mounted atop a pole served to increase the line of sight R/T range. The Ground Liaison Officers at all levels also had plenty of time to update themselves and become totally involved with the squadrons at various bases. The correct procedure for air support was highlighted to the army officers at all levels. They were indoctrinated against demanding specific number of sorties, but educated to specify the target and task for the IAF. They were assured that the IAF would optimally task the aircraft with the appropriate weapons and number of sorties required.

The time of two hours for Immediate Air Support was reduced to one to one-and-a-half hours by repeated refinement.10 Improvements were effected in the communication channel for air support demands, both Pre-Planned and Immediate, as well as between various Headquarters of the IAF and the IN and the IA.

Pilots of TACDE (Tactics and Combat Development Establishment) trained themselves for low level strike missions by night against runways and marshalling yards. To warn these aircraft on hostile air activity, an airborne relay using MiG-21 under code name “Sparrow Control” was established. The “Sparrow Control” would gather relevant information from Radar Units and pass it to strike aircraft deep in enemy territory. This was (mis) interpreted by the PAF as an airborne radar aircraft (Moss) of erstwhile USSR helping the IAF — like the later day AWACS. AN-12 crew were tasked to train in bombing role by night, flying ultra low level missions. During this preparation phase, the Soviets offered their bomber TU-22 for immediate sale to the IAF. However, after evaluation it was felt that the TU-22 did not meet our requirements. Hence the offer was shelved.11

While the IAF’s transport fleet continued with normal air maintenance that is repeated year after year, in addition it helped the Army’s redeployment in the East. Later, the IAF flew 2386 hours on AN-12s, Packets and Dakotas. It carried 3700 passengers and 1034 tons of load. Simultaneously it also undertook flood and cyclone relief in four states. To cover East Pakistan from every direction three civil airfields were activated for use by the IAF. These were Dum-Dum, Panagarh and Agartala. Once the operations progressed rapidly after the start of war, the two brigades which became surplus in the East, were quickly air transported to the Western theater.12

The IAF expected to attain total control of the air by D+2 and had prepared plans to allot alternate task to the various Squadrons once the PAF was totally neutralized.

The IAF expected to attain total control of the air by D+2 and had prepared plans to allot alternate task to the various Squadrons once the PAF was totally neutralized. These related to air defence squadrons switching to offensive air support of the army; relocating themselves to cover the entire area of East Pakistan; as well as move of some squadrons to the Western theater. It also included redeployment of air defence artillery guns and surface to air missiles (SAMs) to the west once the air threat was over in the East. To cater to jamming of our radars, as well as gaps in low level radar cover, visual observers were hastily trained and deployed. Till the PAF was actually neutralized, proper air defence had to be provided. The air defence also catered to a possible PAF pre-emptive. To facilitate proper command and control the Eastern theater was sub-divided into three sectors, namely Bengal/Bihar sector, Assam Valley sector and the Kumbhigram/Tripura sector. HQ Central Air Command at Allahabad, as well as HQ Eastern Air Command at Shillong, both had parts of this area under their jurisdiction. This meant that HQ Eastern Army Command had to interact with two Air Command HQs.

Therefore, the boundaries of these air commands were readjusted, so that the Army dealt only with HQ Eastern Air Command. In addition an Advance HQ was set up at Fort William, co-located with Army HQ.13 The AOC Advance Headquarters was responsible for all air operations in the Bengal/Bihar sector. His area of responsibility in East Pakistan lay in the area west of the River Brahmputra. No 3 and 9 Tactical Air Centres operated under his control.

In the other two sectors the air defence was looked after by Commander No 3 Air Defence Control Centre, whereas all other air operations were looked after by Headquarter Eastern Air Command. Discussions were held with the Navy too, since aircraft carrier Vikrant was to operate in this area. The latitude of 22°25’ N (Chittagong area) was the dividing line for air operations between the Air Force and the Naval air arm. Targets to the south of this line were the responsibility of the Navy. Also, during the planning stage, the IN promised close air support to the IA south of Feni, but later was unable to provide the same.14 Since civil airfields and transport airfields were being activated with combat aircraft, officers with fighter background were positioned to ensure smooth operations. As the Army was planning out its multi-pronged thrusts from all around, many photo recce sorties were flown between 24 October and 20 November and aerial mosaics of all thrust lines were provided to the army. The Mukti-Bahini Air Force was given One Otter aircraft and an Alloutte helicopter modified to fire rockets and guns and was christened as “Kilo Flight”. It was located at Dimapur.

Since civil airfields and transport airfields were being activated with combat aircraft, officers with fighter background were positioned to ensure smooth operations.

In the Western theater additional preparations specific to the plans were completed. That the war might start by a pre-emptive strike by the PAF was catered to, and the IAF was prepared to take on a quick offensive thereafter, to wrest the initiative from the PAF. Five squadrons of MiG-21s and four of the Gnats were dedicated to air defence duties. After 1965, the IAF had realized the poor performance of the K-13 missile and wanted the MiG-21 interceptor to be fitted with cannons. GSh-23 mm gun in a gondola had to be fitted under the fuselage. By June 1971 these gun gondolas had been lying at HAL Nasik for over a year, yet they had not been fitted.

HAL expressed difficulty in being able to modify the full fleet within the time available. So the Air Officer Maintenance, Air Marshal YV Malse got the guns air lifted to No 3 Base Repair Depot of the IAF. In record three months the job was done by the IAF. It really was an amazing feat. And in the first duel between the Mach 2 Star-fighter of USA and the MiG-21 of USSR on 12 December, Flt Lt BB Soni would shoot down the Star-fighter with this very gun and gun sight developed and fitted by the IAF.15 Radar deployment was re-examined, SAMs and LLAD guns redeployed and a visual observer system called the low level reporting system (LLRS) was put in place. Transport squadrons were redeployed to inner bases outside the reach of the PAF. AN-12s were adapted in bombing role to unleash a multitude of bombs, both 1000 pounds as well as 500 pounds on area targets.

Regarding the Chinese threat, it was appreciated that the Chinese with no permanent deployment in Tibet would not be a threat beyond a token show of force. So the IAF could devote its strike might unhindered against Pakistan. To gain control of the air in the West, PAF airfields at Sargodha, Mianwali, Shorkot Road, Murid, Peshawar, Chander, Risalwala, Chak Jhumra, Karachi and Drigh Road were earmarked for counter air strikes. To destroy/disrupt PAF air defence, the radars at Lahore, Sakesar and Badin were to be attacked. In concert with the Indian Army, Interdiction was planned to isolate the troops at the front. Continuous recce was planned to locate Pak’s No 1 Armored Division. For maritime recce on both sides, Super Constallations were relocated at Hyderabad (Hakimpet). This also placed them well outside the PAF aircraft range. At a strategic level, it was decided to attack Pak’s Oil and Gas Industry, Power generation stations and facilities at the harbor.

The official history described the planning and preparations aptly: “The general concept for gaining air superiority was to mount relentless attacks on the Pak airfields and radar installations, so as to force the PAF to deploy a major portion of its resources for their defence.

Such a reaction would enable the IAF to concentrate on special/strategic strikes and on close support to ground forces with relative impunity. In the light of subsequent pattern of PAF reactions the preferred concept stood vindicated.”16