Pakistan’s 27 Brigade held the Akhaura-Brahmanbaria area. Akhaura, just across the border from Agartala, was an important rail-junction. For that reason the Pakistanis had paid considerable attention to its defences. These were mainly based on the Titas River, which ran West of the town, and some bils in the area. Six kilometres South of Akhaura was Gangasagar (see Fig. 13.6). The defences at the two places were manned by about one battalion strength of regular infantry, a good number of paramilitary personnel, a few PT-76 tanks and some artillery. The Agartala airfield was close to the border and had been under fire.

To ensure its security, defensive action was ordered by General Sagat Singh towards the end of November. Brigadier Tuli was to neutralize Gangasagar while Misra was to tackle Akhaura.

It was during the battle for Gangasagar that the only PVR awarded during the Bangladesh campaign, was won by Lance Naik Albert Ekka of 14 Guards. As part of the operation by 73 Brigade, this battalion put in a silent attack on the first objective, the town’s railway station, in the early hours of 3 December. The enemy was well entrenched in concrete bunkers. While assaulting one of these, Albert Ekka was wounded but succeeded in capturing a light machine gun and bayoneting two of the enemy. After the battalion had cleared most of the enemy from the railway station area, a medium machine gun in the second storey of a building held up further advance.

According to Pakistani sources, the Indian move towards Ashuganj was no surprise to them and they expected it.

Ekka again displayed outstanding courage; he crawled up to the building and threw a grenade through a loophole, killing one of the enemy. Then, with complete disregard for personal safety, he climbed a side-wall, entered the top bunker and bayoneted the machine-gun crew. This led to a quick fall of the position. The battalion captured a large quantity of arms and six prisoners. Their own casualties were 10 killed and 53 wounded, including one officer and three JCOs.

Akhaura proved a tougher nut to crack. The battalions under Brigadier Misra struggled against its defences for three days before they were finally reduced on the morning of 5 December, 18 Rajput providing the coup de grâce. One of the battalions, 4 Guards, managed to infiltrate West of the Titas and discover that the double-track railway running to Brahmanbaria had been converted into a rail-cum-road track by removing the rails from one of the tracks. It was also found that the bridge over the Titas was almost intact and lightly held. These discoveries led to a change in the division’s task. Instead of going South it was now ordered to advance North-West to Ashuganj by way of Brahmanbaria. The change was to lead to a rapid strike by 4 Corps across the Meghna.

After the battalion had cleared most of the enemy from the railway station area, a medium machine gun in the second storey of a building held up further advance.

On 5 December the forward elements of 311 Brigade began to advance towards Brahmanbaria. The next day 73 Brigade also commenced its advance. A Mukti Bahini force had been operating under Gonsalves in the Akhaura area, That day he ordered this force, together with 10 Bihar, to make an outflanking move by way of Chandura and Sarail to the Ajabpur ferry on the Meghna. Brahmanbaria was about 14 kilometres North-West of Akhaura and lay in a loop of the Titas. This situation gave it a good defensive potential and the Pakistanis had developed it into a strongpoint. After the fall of Akhaura its garrison had withdrawn there.

According to Pakistani sources, the Indian move towards Ashuganj was no surprise to them and they expected it. However, while they waited for a frontal assault on Brahmanbaria, 73 Brigade pushed out two prongs: one to the town’s South and another to its West. Reacting to this manoeuvre they abandoned the town on the night of 7/8 December, and made for Ashuganj, 13 kilometres to the North-West.

On the morning of 8 December, Gonsalves ordered 311 Brigade to take up the pursuit; he wanted to capture the bridge at Ashuganj before the enemy had settled down. However, the build-up of his division at Brahmanbaria had not been quick enough. Besides, the enemy had damaged the bridge there. Even the bridge West of Akhaura was not yet fit for heavy vehicles and it was not possible to bring forward bridging equipment. This meant that 311 Brigade would have no artillery support in its advance to Ashuganj. The easy fall of Brahmanbaria had, however, given the impression that the enemy was disorganized; hence the decision to risk a pursuit without artillery. The PT – 76 tanks were expected to give enough support. 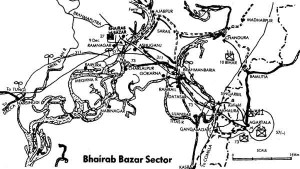 The Pakistanis, however, had had the time to sort themselves out. They were well-dug in at Ashuganj by the time the leading elements of 311 Brigade (18 Rajput) got there on 9 December. The brigade had not met any serious opposition after Brahmanbaria and did not expect any at Ashuganj. As at Kushtia, the Pakistanis let the Indians come into the built-up areas and then opened up. The brigade lost 120 men and 4 tanks.18 About this time 10 Bihar also arrived from the North and both battalions had to fall back.At this stage the Pakistani divisional commander ordered the blowing-up of the Ashuganj bridge. This left his 27 Brigade on the East bank of the Meghna but it managed to cross over and reach Bhairab Bazar.

By this time the river-ports of Daudkandi and Chandpur had been abandoned by the enemy as a result of the operations of 23 Division. Between Ashuganj and Dacca the enemy had only the Razakars and the EPCAF. They had no artillery support and Dacca itself had only one regular battalion of infantry, which was holding the home-bank of the Lakhya River. Accordingly, Sagat Singh decided to cross the Meghna straightaway, using the helicopters placed at his disposal. A landing zone was chosen near Raipura, about 15 kilometres South-West of Bhairab Bazar. Thence, the two brigades under Gonsalves were to move along the rail-track to Narsingdi, which was to be developed as an advanced base for the attack on Dacca. The heliborne crossing was to be supplemented by ferrying troops and equipment, using local resources.

Brahmanbaria was the base for the heli-lift which began during the afternoon of 9 December; it continued during the night till the moon set. On the following day troops were flown direct to Narsingdi while 311 Brigade was mostly lifted by air, 73 Brigade used river-craft for the crossing. The Pakistanis at Bhairab Bazar were kept in check by the deployment of two infantry battalions South of the town and by aerial action.

The build-up at Narsingdi was however, slow as only about ten helicopters were available. Ferrying of artillery and tanks across the Meghna also posed serious difficulties. However, by 14 December both brigades had crossed it and the first artillery shell was fired on Dacca that day. The ground attack could begin only two days later and the cease-fire intervened before the operation could develop.

Pakistan’s 39 (ad hoc) Division, under Major General Mohammad Rahim Khan, was deployed in the Comilla-Laksham-Chandpur-Daudkandi area. (see Fig. 13.7). Its 117 Brigade was holding the border from the North of Comilla to Chauddagram, while its 53 Brigade was responsible for the area further South up to Feni. Major General Hira’s operations in the Belonia bulge had led the Pakistanis to believe that 4 Corps’ thrust was likely to be towards Feni and Chittagong. However, they had not neglected the defences of Laksham and Comilla, which stood on the route to Dacca. Between Comilla, the main city in the region, and Laksham, was a string of hillocks called the Lalmai Hills.