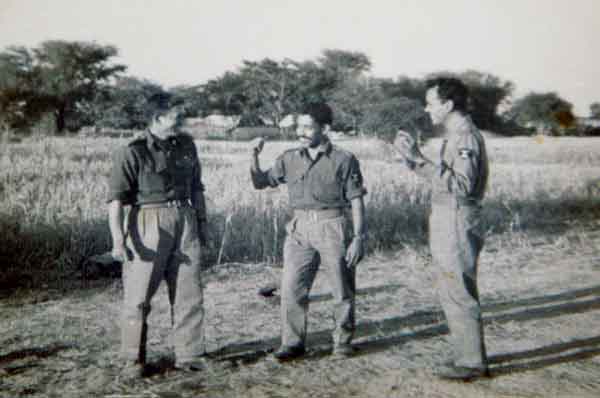 There were two more instances when we escaped narrowly. On one of the occasions of clearing up the Pakistani militia concentration in the surrounding villages, I formed up a team of one JCO and five riflemen including one NCO for clearing a nearby village. The soldiers who by now had neutralized many such re-grouping camps were aware of the tactics to be used. Though the JCO seemed to be somewhat nervous but they assured me of carrying out the task with success. But somehow when they reached near the village they were unable to maintain the secrecy of their presence and invited enemy fire upon themselves in which the NCO was injured. When they fell back to the base camp only then we came to know what went wrong. The nervous JCO was unable to hold on his nerves and committed a mistake. He was immediately released from his duty and was sent back to the headquarter.

This was the second incident of the kind in which the soldiers were not able to hold their nerves.

Probably this happened since there was no officer in-charge of the team or perhaps the JCO and neither the soldiers under him were having the required confidence upon themselves to take ‘on the spot decisions’. One more factor which was indirectly responsible for this tragedy was the system to be followed. Since I and 2nd Lieutenant Dalal were mostly given the tasks of patrolling and clearing enemy concentration areas, as a result no other officer was able to get the opportunity of knowing about the things to be taken care off in such operations. Though we shared inputs and experiences with other officers of the Companies but there still remains a difference between listening and performing.

Since I had undertaken patrolling duties continuously for frequent number of times and 2nd Lieutenant Dalal was deployed elsewhere, so there was no other officer available to accompany that fateful team. Moreover the order had been passed on from the battalion headquarter to Alpha Company, of which I was the second-in-command and for engaging officers from other companies needed the consent of respective company commanders,  which at that time was although possible but the response could be predicted well before, from the kind of attitude of the Company commander. This system was indeed an evil during war days which still persists till date. As a result looking at the situation and after consulting with my Company commander, Captain Oberoi, I had no other option left. But the JCO had to be made the team leader and coincidently had earlier taken part in such clearing operations. Probably the habit of working under guidance or the assumed burden of responsibility and his over-consciousness might have made him to lose his nerve.

The incident of loosing ones nerve is not very rare. On the contrary it is more or less very common. It can happen with any one, not necessarily it happens with lower cadre soldiers but it does happen with officers. One such incident happened when I, 2nd Lieutenant Jacob, 2nd Lieutenant Srinivas, 2nd Lieutenant Bhadesra and 2nd Lieutenant Malik were given the task of securing a particular stretch of railway line which connected Sialkot with Lahore. We went at the location which was informed to us with a group of 20 soldiers. We established defensive positions on both sides of the railway track. As per the information that we had received, Pakistanis used this rail route for reinforcing their small pockets which had been broken after Indian advance.

On 28th September 1965 the news of declaration of ceasefire reached us. For many of the soldiers and officers it was out of the blue.

By the time we had secured the area it was late evening. There was no sign of any Pakistani movement but our source of information was coincident enough about the data that was passed on to us. We had to wait for some more time when finally we heard the sound made by the boots of soldiers while walking along the railway track. Since we had been over there for quite a long duration and the visibility had diminished due to the darkness, so it took some more time for us to roughly get an idea of the numerical strength of the enemy. We held on to our rifles and had taken firing positions. The plot was perfect for ambushing Pakistanis but the only fact which could turn everything was the number of men on each side. We totaled 25 men, five officers and twenty riflemen. In order to over-power the enemy our strength should have been higher than what enemy had. At that moment this thought perhaps ran down the minds of most of us. I was mentally prepared to take on the enemy, since the intensive patrolling done while clearing villages had given me a lot of expertise in handling Pakistanis. But our group also consisted of few nervous chaps and a fresher. None of the 2nd Lieutenants with me at that moment had participated in any such task before.

On the other hand the soldiers allotted to each officer were four. Hence any hastily taken decision could prove fatal if went wrong. After sometime when the Pakistanis approached a distance of 100 to 150 meters, we identified them and were just trying to get an approximate idea of their strength when one of the 2nd Lieutenants opened fire, without letting any one of us know and along with him his four soldiers too fired, which alerted the enemy.  Within no time the entire scene got changed. Opening of fire before Pakistanis came close enough to be surprised, revealed our positions to them. The atmosphere suddenly became confusing. Now the Pakistanis started firing on us and the situation was going out of control.

Since I was leading the group it was my responsibility to tackle the things. In utter chaos many of the men and few of my fellow officers fell back. Now we were left depleted in strength, totaling 5 to 6 men. The advantage we had at that moment was the idea of location, we knew the area around us but the Pakistanis being cut-off from that area had little knowledge of the changes around them.

I quickly dispersed my men to project a larger coverage area. I send three men to my right side and other two to the left, who were manning an LMG (Light Machine Gun). Like this we projected a frontal coverage area of 18 to 20 meters and opened a full force counter fire. It worked and we saw the Pakistanis retreating back. We continued to fire till the Pakistanis were out of sight along with their show-off. This was the second incident of the kind in which the soldiers were not able to hold their nerves. But this time they were accompanied by the officers who were leading them. Had the Pakistanis been more in numbers and called for an artillery fire all the remaining of us would have been killed. But it is said that when a person has removed the fear of death or even the fear itself from his mind, then there is no scope of any kind of fear in his life.

After almost 10 days of stay in the area around Phillora and securing several vital enemy installations, we came to know that the 26th Division which had been stationed at Jammu, had positioned themselves in such a way that a siege could be laid on Sialkot. But for 69th brigade it appeared as if the war was over, since we hadn’t received any further orders except of carrying out long patrols and consolidating our positions. 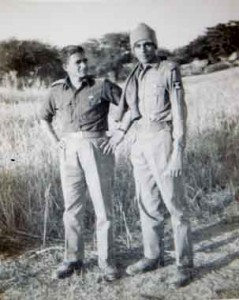 On one occasion I had undertaken a patrolling duty to identify any enemy movement in a specified village that lay closer to Sialkot. With a five men team including myself travelled close to the given location. Upon reaching there we found that a Gorkha battalion was deployed facing Sialkot, for blocking any enemy movement in or out of the town. After talking to them we learnt that the entire town had been vacated by the Pakistanis fearing a three sided Indian attack.

In order to mark the presence to Indian troops around Sialkot and as a memory of 1965, I along with my mean pulled out a milestone, from the main road that led into Sialkot, which embarked in Urdu stating “Sialkot 1 Mile”. I feel proud to say that the milestone which was brought by me from Sialkot still remains, as a prized memento of Indian Army’s success in the 1965 operation, in the battalion headquarter of 3rd Madras battalion.

On 28th September 1965 the news of declaration of ceasefire reached us. For many of the soldiers and officers it was out of the blue. Also at that time there was civilian outrage against the ceasefire.