1965 War: Op Gibraltar and How the War Started 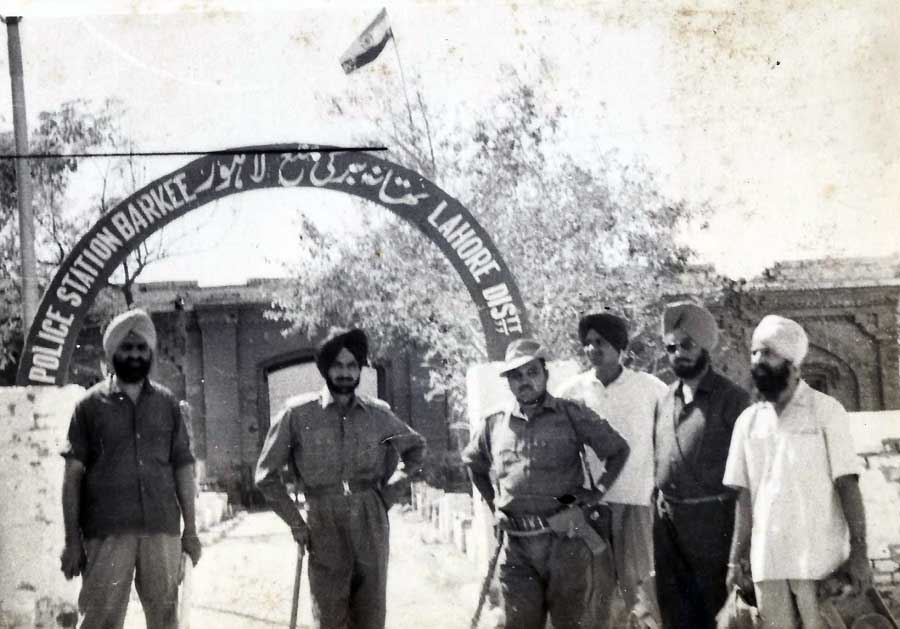 Who started the war or to put it more palatably – how did the war start? Just as it would be naïve for the Indians to keep repeating that the ‘71 war was started by Pakistan it would be extremely myopic to continue haranguing now, almost half a century after that war, that India was the aggressor in 1965. In 1971 Indian regular troops were already making forays across the IB in what was then East Pakistan. All that happened was that Pakistan pre-empted the planned Indian offensive by commencing hostilities along the Western front on 03 December whereas the Indians had planned to launch their offensive for 04 December.

Emboldened by the rather timid and weak response of the Indian politico-military leadership during the Kutch crisis, Operation Gibraltar was conceived to get back the Indian part of Kashmir through a covert operation.

The genesis of the ’65 war can actually be traced back to the Kutch crisis. Hassan Abbas (Pakistan’s Drift Into Extremism: Allah, The Army, And America’s War On Terror) says, quote,’ When the Pakistan Army inflicted a short, sharp reverse on the Indians in the Rann of Kutch in mid-1965, Ayub’s spirits got a boost. More important, the international arbitration that followed the Kutch dispute (resulting in favor of Pakistan) put Pakistan under the assumption that if the Kashmir problem was to be solved, the Rann of Kutch route would have to be replicated – a limited clash in Kashmir leading to a threat of all-out war, and then an intervention and arbitration by the great powers’, unquote. Emboldened by the rather timid and weak response of the Indian politico-military leadership during the Kutch crisis, Operation Gibraltar was conceived to get back the Indian part of Kashmir through a covert operation. A plan which almost all Pakistani and neutral analysts have maintained was ‘a clumsy attempt’ to wrest control of ‘Indian Occupied Kashmir’ and was doomed to collapse. Not only this, what was more surprising and completely contrary to the accepted principles of war was the total lack of coordination and integrated planning for Operation Gibraltar and its followup, Operation Grand Slam. This (Grand Slam) sequel to Gibraltar envisaged an attack on the vital Akhnoor Bridge in Jammu and Kashmir, which was not only the lifeline of an entire infantry division in Jammu and Kashmir but could also be used to threaten Jammu, an important logistical point for Indian forces.

General K. M. Arif, in his biography (Khaki Shadows: Pakistan1947-97), writes,“ It is amply clear, though, that all prudent civil- military mechanisms of defense strategy and policy planning were bypassed in the pre-planning of Operation Grand Slam. The Defense Committee of the Cabinet (DCC)—the apex defense policy making body of the country—did not even meet prior to or during the war. The Defense Services Chiefs Committee (DSCC) which comprises the three services chiefs and is required to approve all military plans was never even informed about the existence of the plan. The air and naval chiefs deeply resented the fact that they were not taken into confidence.”

According to then Chief of the Pakistan Air Force, Air Marshal Nur Khan, there was little coordination amongst the military services on the impending operation. In any case the plan went completely awry in execution . The infiltrating troops and a large number of irregular and ‘volunteers’ known as the ‘Gibraltar Force’ were organized and commanded by GOC 12 Infantry Division, Major General Akhtar Malik, subsequently awarded the Hilal-i-Jurat for his role in the planning and execution of Gibraltar. In one of the biggest mysteries and blunders related to the inept Pak handling and lack of higher direction of war (not that the Indians did any better, in this war atleast), he was in-explicably replaced by Maj Gen Yahya Khan (later Chief) just when Akhnur was within the grasp of the Pak Army ! As MJ Akbar the Indian journalist says, ’’ at this point, someone’s prayers worked, an inexplicable change of command took place.”

Pak columnist Lt Col Gilani states: “…Pakistan high command had failed to foresee the strategic counter action of the Indian Army against Sialkot, Lahore and Kasur, in view of the foreign office assurance, that India would confine its retaliation to the territorial limits of Kashmir”.

Ahmad Faruqui, the well known defense analyst and economist (Rethinking the National Security of Pakistan) says that when he asked Sajjad Haider, a retired Air Commodore (author of the book, Flight of the Falcon – Demolishing myths of Indo-Pak wars of 1965 and 1971), to name the aggressor, ’ Nosy’ Haider, a PAF fighter pilot (‘jaunty-angled cap, silk scarves, special boots, and even the way they stand’), known for his rather controversial but no holds barred comments, not mincing any words said very unequivocally, ‘Ayub perpetrated the war.’

Anyhow, be that as it may, Gibraltar was launched and India after an initial phase of setbacks, in a series of retaliatory operations, managed to eliminate the saboteurs and capture some tactically advantageous Pak posts across the Cease Fire Line. The loss of Hajipir Pass in August ’65 along with Indian successes in the Neelam Valley and opposite Uri unnerved the Pakistani GHQ which assumed that Muzaffarabad was about to be addressed next . It was under these circumstances that the Pak GHQ ordered launch of Operation Grand Slam on 01 Sep 1965 to cut off the Indian supply lines to J& K. So was Grand Slam initiated as a result of Indian aggression or was it a continuum of the already initiated but now precariously poised Pakistani plan to whip up the local Kashmiri population to a frenzy, so that the larger plan to integrate the state of J & K to Pakistan could be fructified??

Brig (retd) Shaukat Qadir, an impartial and independent analyst clearly mentions that Pakistan’s Operation Grand Slam was ‘one of a number of contingency plans that had been prepared to support Gibraltar’. Operation Grand Slam basically intended to sever the road link between India and Indian held Kashmir once the valley was up in flames. Operation Grand Slam was four phased says Shaukat Qadir (The 1965 War-A Comedy of Errors) : the capture of Chamb, the crossing of river Tawi and consolidation, followed by the capture of Akhnur, and finally severing the Indian lines of communication and capturing Rajauri. As mentioned earlier, the failure of Gibraltar resulted in the loss of some key Pak posts in Kashmir, and it was then that Operation Grand Slam was undertaken to relieve pressure on the Pak troops in Kashmir. It is interesting that the Pak columnist Lt Col (retd) Mukhtar Ahmad Gilani (Panoramic Analysis —Senior and Junior Leaders —Aug 1947 to Dec 1971) calls the Pak foray into J&K as a ‘counter-offensive’. He states that ‘’After launching the counter offensive (sic) in Chamb-Jaurian Sector the Pakistan high command (the President, the C-in-C and the CGS) had failed to foresee the strategic counter action of the Indian Army against Sialkot, Lahore and Kasur, in view of the foreign office assurance, that India would confine its retaliation to the territorial limits of Kashmir’’. It is a known fact that the Indian thrust across the IB was infact a counter offensive in retaliation to ‘Gibraltar / Grand Slam’.

To relieve forces almost cut off in their part of Kashmir, the Indian Government took the momentous decision, as advised by Gen J N Chaudhuri, to open another front across the IB. The aim was to relieve the pressure in J&K where the situation was getting uncomfortable for the Indian Army.

Maj (Retd) Agha Humayun Amin (Grand Slam-A Battle of Lost Opportunities) mentions that on being briefedby Major General Akhtar Malik (GOC 12 Infantry Division) on the Gibraltar plan, Ayub suggested that 12 Infantry Division should also capture Akhnur. This attack was codenamed ‘Operation Grand Slam’ and was planned as a sequel to ‘Gibraltar’. Similarly Shaukat Riza, the official historian (Pak) of the 1965 War has admitted that by 31 Aug once the Indians had ruptured 12 Infantry Division’s defences across the cease fire line, the Pak GHQ decided to launch Grand Slam to ease pressure on the Division by capturing Chamb and threatening Akhnur. In an extremely aggressive, well planned and confident move, Pak infantry units backed by armour overran the Indian outpost in Chamb in the initial phase itself, crossed the Tawi river and were headed towards Akhnur in order to cut off India’s line of communication with Srinagar.

The Indians were now under tremendous pressure and the military situation was getting precarious in the Kashmir sector. Ahmad Faruqui puts it on record ‘’ that the Indian response on Sept 06 across the international border at Lahore was a natural counter-response, not an act of aggression.’’ To relieve forces almost cut off in their part of Kashmir, the Indian Government took the momentous decision, as advised by Gen J N Chaudhuri, to open another front across the IB. The aim was to relieve the pressure in J&K where the situation was getting uncomfortable for the Indian Army. Sultan M. Hali (Operation Gibraltar—An Unmitigated Disaster?) adds that,” –the guarantee by the Foreign Office that India would not dare to conduct a full scale attack was a civilian opinion. As military commanders, Ayub and Musa should have taken all contingencies into consideration, including that of a full scale war. Neither the Supreme Commander (Field Marshal Ayub Khan) nor the C-in-C (Gen Musa) and his General Staff, viewed the chances of a full scale war with India as ’probable’ leave alone warranting the cancellation of leave. It was a gross misconception and miscalculation of the operating factors which sent the Pakistan Army into battle on Sept 6, 1965 with 25% of its strength on annual leave, it was inexcusable because the C-in-C Gen Musa and his General Staff knew fully that the entire Kashmir Valley had been ablaze for over a month and ferocious air and land battles were being fought in Chamb-Jaurian sector for nearly a week, involving large formations of armour, infantry and artillery. Under the circumstances, it was Pakistan that was caught napping’’.

The Western Front –The Indian Riposte

Following this, the Indian Army then counterattacked by crossing the international border thus opening the Western front in Pakistan Punjab to force the Pakistan Army to relocate troops and distract the Pak Army’s attention and resources away from Operation Grand Slam.

Yes, there were no declarations of war made by the adversaries, either when the Pak troops crossed over in J&K nor later when the Indian troops crossed over in the Punjab. Circumstances and perceptions may differ on warring sides, but historical facts cannot be changed or misrepresented for partisan reasons. In this article, to be fair, events as they unfolded have been recorded as viewed from both sides. Coming on to the question as to who won the ’65 war, Dennis Kux has summed it up very aptly that India “won simply by not losing”. The reader may chose to interpret this very candid and truthful remark in whichever way he choses to decide who won the war.