Above all commanders must always place themselves in a position to be able to influence personally the course of an action. It must be impressed upon all that a commander’s function does not end with the formulation of a plan – it really begins with the launching of troops into battle. For while a good plan is essential for any battle, its proper execution is vital for success.

The fighting in J&K confirmed in no uncertain terms the immense value of paramilitary forces. Operating in conjunction with regular troops, these forces enabled the enemy to hold large areas both in frontage and depth.

Where a situation demands speedy action and time is at a very high premium, a greater share of the period available must still be devoted to ground reconnaissance and briefing of troops.

The static holding of picquets by regular troops, as in our case, psychologically and professionally undermines their ability for offensive action. Commanders and troops become static-minded and lose the flexibility needed for aggressive action. Besides, training, except on limited individual basis, is not practicable. Therefore, regular troops committed to picquets lose professional efficiency and suffer from mental inertia induced by the role of static defence.

With the positioning of paramilitary forces, like the J and K Militia, on picquets, the regular troops can be suitably deployed in battalion groups at strategic points to serve as ‘mobile striking force’ against any seriously threatened sector. Such an action will have the following advantages:

The availability of suitable paramilitary forces to release regular troops from the holding role on the Cease Fire Line is strongly recommended. To be effective these forces should be adequately trained and suitably equipped for the role. The present Armed Police battalions are not suitable for manning the Cease Fire Line.

Helicopters have proved to be invaluable in J&K for the following tasks:

The fighting in J&K confirmed in no uncertain terms the immense value of paramilitary forces.

There was, however, always an acute shortage of this invaluable aircraft for the multiplicity of tasks mentioned above.

Close air support was neither very effective nor timely for a variety of reasons. The weaknesses in the provision and execution of close air support have been discussed in detail in PART V. The subject is therefore not elaborated here.

In the initial stages of the campaign, some of the units, especially those with a large proportion of ‘green’ troops, were visibly shaken when subjected to air strafing and heavy artillery and tank fire. This was doubtless due to lack of, or faulty, battle inoculation where the safety factor has been unnecessarily exaggerated. To give a realistic feel of battle field atmosphere, battle inoculation exercises should be framed to include the following essential requirements:

To achieve realism, a percentage of unavoidable casualties should be accepted.

There is a tendency amongst some commanders to exhaust themselves mentally with routine details long before battle is joined.

In war the ability to outlast the opponent physically is often a deciding factor for success. While some of the units had a high standard of physical fitness, a few of them lacked the stamina to continue fighting over an extended period. There was a sharp drop in their fighting efficiency after a period of two to three days continuous battle. This is unacceptable in war. A formation or unit should be trained to continue fighting, without appreciable loss of efficiency, over a period of one week. For this, training exercises must be planned to accustom troops and commanders to withstand long spells of continuous stress and strain under realistic conditions of battle.

There is a tendency amongst some commanders to exhaust themselves mentally with routine details long before battle is joined. This must be avoided. Commanders should conserve their mental stamina for withstanding the inevitable exhaustion associated with the actual conduct of battle. The ability to keep oneself mentally fresh, and hence alert, is an absolute prerequisite to sound judgement and sober decision in battle.

The enemy had used only a few Napalm bombs during the recent fighting, but we must be prepared for more of these on a larger scale in any future conflict. To untrained troops, the sight of an exploding Napalm bomb can be terrifying unless they are forewarned. Napalm bombs are also most dangerous against inflammable targets, like ammunition and petroleum, oil and lubricants dumps, on account of the resulting chain reaction.

In the initial stages of the campaign, some of the units, especially those with a large proportion of ‘green’ troops, were visibly shaken when subjected to air strafing and heavy artillery and tank fire.

The enemy had constructed concrete pill-boxes along the main approaches. In some cases our assaulting troops stalked these defence works and destroyed the occupants by throwing hand grenades through the slits. In most cases, fire from these pill-boxes held up our advance, until these could be stalked at night and tackled from the rear. Rocket launchers and antitank grenades made little impact on them. A drill needs to be evolved for the destruction and neutralization of pill-boxes both during day and night.

The standard of radio telephony procedure, particularly in the infantry, was far from satisfactory. Officers were either shy to speak on the wireless or were inclined to ramble. Rarely, if ever were slidex and linex used to ensure security.

As enemy counter attacks supported by air, armour and artillery were launched with speed, troops in the open suffered heavy casualties and were in many cases driven off the objective. Even an open trench is a great life saving factor during shelling which accounted for 75 per cent of our casualties in battle. The habit of digging-in must come as second nature to all men. Half-hearted digging, which is allowed to pass unchecked during training, becomes a habit with troops and leads to disastrous consequences in war. Men must be trained to dig hard and deep until a trench is completed, even when they have to move on soon afterwards. Officers and Junior Commissioned Officers must carry entrenching tools and learn to dig for themselves. 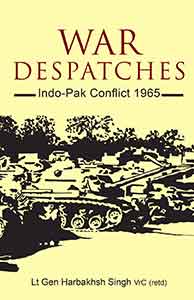 The type of fighting we experienced in J&K and the taste of enemy para action in the PUNJAB, however abortive, should make us realize that there are no rear areas or non-combatants. All administrative personnel, whatever their trade or location must be trained to fight as soldiers should the occasion demand.

On the conclusion of hostilities, our training techniques were suitably re-orientated to eradicate the weaknesses revealed during the conflict. A series of training notes were issued to emphasise particular aspects of training. I have made it a particular point to watch for shortcomings in leadership traits during my visit to formations on exercises. Formation commanders have been instructed to do likewise.

Author of In the Line of Duty: A Soldier Remembers and War Despatches: Indo-Pak Conflict 1965.