1965 War: General Chaudhury did not order withdrawal behind River Beas 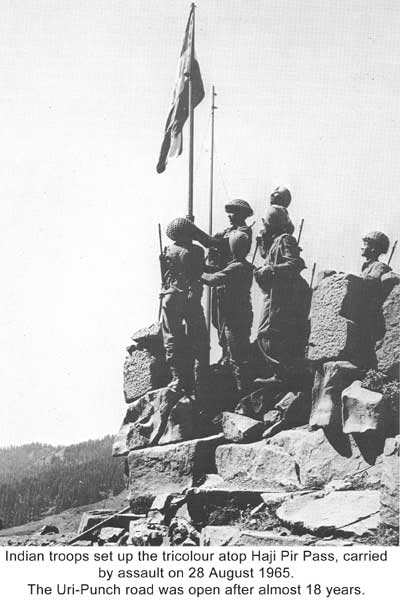 Fifty three years have passed since the 1965 war with Pakistan, still controversies and confusion on many issues and events persist. It is so because the official history of this war is shrouded in secrecy. The documents with the MOD, MEA, RAAW, IAF and army formations are yet to be declassified. Given this blanket blackout of authentic information, hearsay, gossip, speculation, calumny continue to be floated and controversies abound.

The one controversy that seems to have nine lives is the alleged order by General Chaudhury, the then COAS to Lt-Gen Harbaksh, Western Army Commander, to pull his troops behind Beas river

The one controversy that seems to have nine lives is the alleged order by General Chaudhury, the then COAS to Lt-Gen Harbaksh, Western Army Commander, to pull his troops behind Beas river. Inder Malhotra, in an article in a national daily, added his bit to this controversy. He records that, once General Chaudhry came to know that Pakistan has two armoured divisions, ‘he panicked and ordered Harbaksh to withdraw his troops behind Beas, and the latter refused.’ He goes on to add that it was the Maharaja of Patiala who prevailed upon Chaudhry not to insist on Harbaksh to carry out this order. However, Malhotra does not elaborate as to how a maharaja ( then a captain and ADC to Harbaksh ) came in between the army chief and his army commander concerning an order of far reaching consequences at a critical stage of the battle. He also does not seem to know that, the existence of second armoured division with Pakistan was known to army HQ well before the war.

K Subramanyam, a defence commentator of considerable repute and former director of IDSA, in an article, stated that Gen Chaudhuri had sought Prime Minister Lal Bahadhur Shastri’s permission to withdraw troops behind Beas and that the PM did not permit him to do so.  This version too, is seriously flawed and contradicts one by Malhotra. If Chaudhuri first approached the PM and drew a blank, he could not have passed such an order to Harbaksh. If he had spoken to Harbaksh first and got a response that there was no need for such a move, he could not have approached the PM on this issue. A catch 22 situation!

This story of Chaudhury’s order and Harbaksh’ refusal is baseless and to support it is to display complete lack of understanding of conduct of operations.

This story of Chaudhury’s order and Harbaksh’ refusal is baseless and to support it is to display complete lack of understanding of conduct of operations. The assessment of the situation at army HQ is based on information and assessment sent to it by command HQ  etc. Unless those in contact with the enemy paint a very grim picture of the developments at the front and the command’s assessment is that the existing positions have become untenable and a withdrawal to the rear has become imperative, why should army HQ contemplate withdrawal! The army chief cannot possibly take a decision of such, far reaching consequences, without a detailed discussion with his Director General Military Operations (DGMO.) and the concerned army commander. In this case the then DGMO, Maj-Gen Narinder Singh rubbished this story of withdrawal and termed it as baseless.

Gen Harbaksh in his book, ‘War Dispatches’ and his chief of staff, Maj-Gen Joginder Singh in his book, ‘Behind the Scene’ makes no mention of any order or suggestion from the chieffor a pull back behind Beas. September, 9th and 10th were the critical days during the battle at Khem karan. On 10th Sep Gen Chaudhury moved forward and conferred with Gen Harbaksh at Ambala to take stock of the situation. Harbaksh’s chief of staff and Chaudhuri’s MA were present at this meeting.  Harbaksh in his book ( page 60) gives details of the discussions with the army chief, but there is no mention of any suggestion of a pull back behind Beas. Chaudhuri’s MA too maintained that at no point of time did the army Chief contemplate a withdrawal behind Beas. This story of falling back on Beas is the figment of Malhotra’s and Subramaniam’s imagination.

The war with China in 1962 had shifted India’s focus to that front, relegating capabilities against Pakistan. Indian tank fleet numbered 608, majority being of Second World War vintage, 625 artillery pieces and 35 infantry brigades for the Western front. Against this Pakistan had 765 tanks (including 352 state of the art Patton tanks) 552 artillery pieces, 26 infantry brigades and 9000 Razakars. Pakistan had two armoured divisions against one with India. Their guns had better range and higher caliber. Gen Chaudhury, soon after the Run of Kutch incident had warned his army commanders that, Pakistan could force a war on India. The last minute raising of HQ 1 Corps and 14 Infantry Division in May-June 1965 needs to be seen in this light. The Government of India expected no threat from Pakistan and was not prepared to spend any more funds on defence.

…Chaudhury adopted the strategy of offensive – defensive. Defence in the Punjab and offensive in the plains sector of J and K.

The relative strength was decidedly against India going over to the offensive, but there was no other option. Therefore, Chaudhury adopted the strategy of offensive – defensive. Defence in the Punjab and offensive in the plains sector of J and K. In Punjab it was to carry the war into Pak territory and take up defences based on the East bank of Ichugal canal.  India had no obstacle of its own. In the Punjab sector, though complete surprise was achieved and the task was simple, yet there were failures, which led to a crises situation in the Khem Karan sector.  It was the brilliant strategic concept of Gen Chaudhuri, that brought about destruction of Pakistan armour by an inferior tank fleet.

Malhotra alleges that the army chief had not bothered to take the IAF into confidence. Further that the fall of Akhnoor would have resulted in cutting off Kashmir from the rest of India. On both these points he is completely off the mark. Gen Chaudhuri learnt of Pak offensive on 1 Sep while he was in Srinagar. He and his DGMO flew to Delhi arriving there at mid-day. At 3 PM the army chief briefed the PM, RM, FM, the Chief of the Air Staff and others in the army HQ Operations Room on the situation and highlighted the imperatives of opening another front across the IB to relieve pressure from the Akhnoor sector. The IAF representatives at HQ 15 Corps (J and K) and HQ Western Command were fully aware of the details of PAK offensive in Chamb sector. In any case on 1 Sep, the IAF inflicted heavy damage only on own troops and not the enemy. This was mainly due to lack of joint training. Therefore, to contend that it is the IAF that stabalised the situation on 1 Sep is wrong.  Further his contention that fall of Akhnur would have cut off J and K from rest of India only shows his lack of knowledge of geography of J and K.

Malhotra’s figure of only 8 percent expenditure of ammunition by India is of his own imagination.

.Air Marshal Noor Khan of Pakistan Air Force, in his book has recorded that Pakistan army’s ammunition finished on the second day and Inder Malhotra says that, ‘Pak had run out of ammunition by the time of the cease-fire.’ Those who took part in this conflict would recall that, throughout the war they were subjected to intense shelling by the Pakistan artillery; the heaviest firing being after the cease-fire. By the end of the war, Indian army’s ammunition stocks were never alarmingly low. Malhotra’s figure of only 8 percent expenditure of ammunition by India is of his own imagination.

Pakistan did not expect India to retaliate across the International Border, because it had confined the conflict to CFL, (Chamb sector) as a mere counter to Indian actions across this line elsewhere in J and K. That was the logic that worked on the Pakistani mind, reinforced by perceptions of Indian capabilities; military and political. Given this background, Indian offensive across the IB caught Pakistan completely by surprise. However, the Indian army’s preparations for the offensive between 1 and 5 Sep, the side-stepping of armoured division from Amritsar sector to Jammu and maintaining complete surprise, was no mean achievement.

Though, Malhotra in his recent article in the Indian Express terms Indian army’s success in this war as, “marginal victory.” The point never understood by many is that due to high value targets close to the border neither side was willing to concede territory and therefore, pitched battles took place within few kilometers either side of the border. That was and will remain the dominant reality of any fighting in the plains sector of J and K and the two Punjabs.

It goes to the credit of those who planned the war strategy and others who took part in it, that inspite of being a weaker force, Indian army got the better of Pakistani troops and when the war ended they were decidedly and decisively on top. However to lift the prevailing fog, the entire records pertaining to this war need to declassified to place events and actions in their correct perspective. Only then will there be an end to disinformation and calumny. Gen Chaudhury was a brilliant strategist and Harbaksh a great field commander. These controversies do injustice to them and belittle Gen Chaudhury’s services to the nation.

38 thoughts on “1965 War: General Chaudhury did not order withdrawal behind River Beas”