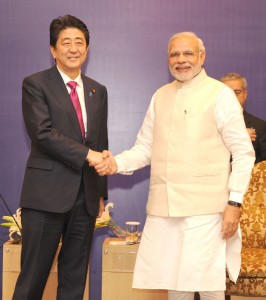 Japanese Prime Minister Shinzo Abe will be in New Delhi on a three-day visit from December 11–13. He will hold bilateral talks with Prime Minister Narendra Modi with an agenda to widen and deepen the points of engagement and cooperation between the two nations.

The discussions are likely to range from defence and civil nuclear cooperation to the possibility of investing Japan’s pension funds in the Indian Railways.

Besides technology transfer and a substantial percentage of local manufacturing under ‘Make in India’, Japan will also offer more than $8.1 billion in official Japanese lending for the approximately $14.6 billion Mumbai-Ahmedabad project.

The meeting between the two leaders is scheduled for December 12. Abe is to visit Varanasi, Modi’s parliamentary constituency on the same day, with the prime minister playing host. During the visit, Abe is also expected to visit the Buddhist holy site of Sarnath.

The tone and tempo of the visit has been set by the announcement that Japan has won the contract to build India’s first high-speed bullet train for the 500-km Mumbai-Ahmedabad corridor. India will be the second country after Taiwan to have Japan’s ‘Shinkansen’ bullet trains. Besides technology transfer and a substantial percentage of local manufacturing under ‘Make in India’, Japan will also offer more than $8.1 billion in official Japanese lending for the approximately $14.6 billion Mumbai-Ahmedabad project. With the bullet trains now a ‘done deal’, the focus has shifted to defence, civil nuclear, education and trade sectors.

On the agenda is the procurement of 12 ShinMaywa US-2 amphibious search-and-rescue aircraft for the Indian Navy (IN). India has plans to acquire two US-2 aircraft off-the-shelf and licence-manufacture the remaining ten. The $1.65 billion deal, which has been a few years in the making, is likely to be concluded with Japanese legal hurdles on transfer of defence technology now being eased. The two sides held the first meeting of their joint working group on the issue in New Delhi in December 2013. It will be for the first time that Japan has agreed to sell an equipment of potential military use to a foreign country.

The private-sector partner from India for the project in collaboration with Japan’s ShinMaywa Industries will be announced during Abe’s visit. Importantly, the Japanese partner will provide all technical support to its Indian counterpart for re-export of the aircraft.

A December 2014 meeting of India’s Services Capital Acquisition Plan Categorisation Committee (SCAPCC) had earmarked $1.65 billion for the US-2 acquisition. The private-sector partner from India for the project (expected to be Pipavav Defence) in collaboration with Japan’s ShinMaywa Industries will be announced during Abe’s visit. Importantly, the Japanese partner will provide all technical support to its Indian counterpart for re-export of the aircraft.

The two leaders are also set to discuss conditions for signing a bilateral civil nuclear energy cooperation pact. In 2010, the Japanese government had started negotiations with India to draw up the nuclear power agreement. The talks were suspended after the Great East Japan Earthquake, but resumed in September 2013.

The negotiations have been sluggish largely due to the Japanese insistence on the need to include binding provisions to suspend the cooperation in case India, non-signatory to the Treaty on the Nonproliferation of Nuclear Weapons (NPT) and Comprehensive Nuclear-Test-Ban Treaty (CTBT), conducts more nuclear weapons tests. The other sticking points have been on that of reprocessing of spent nuclear fuel and liability in case of nuclear accidents.

In July 2014 India had asked Japan to approve reprocessing of spent nuclear fuel in India as part of negotiations to conclude the agreement. Though India felt its request was in line with the nuclear power agreement it reached with the US, Japan, however has not approved reprocessing of spent nuclear fuel in nuclear power agreements it has reached with other countries.

India’s interest in the agreement comes from the fact that Japan holds key technologies on nuclear reactors which have been incorporated in nuclear power plants of countries such as the US and France. Unless India concludes a civil nuclear agreement with Japan, India’s nuclear power projects with US, France, can face legal challenges.

JICA has extended around Rs.580 crore for the GAP project for improving the water quality of the Ganga at Varanasi and improving the living environment for city residents, pilgrims and tourists.

Yet the early conclusion makes economic sense for both the countries. Keidanren (Japan Business Federation), Japan’s most powerful business lobby, has called for an early signing of the treaty.

Japan’s experience in pollution control projects such as river purification and community-based solid waste management can assist India in its fight against pollution. Japan International Cooperation Agency (JICA) has extended around Rs.580 crore for the Ganga Action Plan (GAP) project for improving the water quality of the Ganga at Varanasi (a partner city of Kyoto) and improving the living environment for city residents, pilgrims and tourists.

Under the GAP project, construction of sewers, pumping stations, sewage treatment plants and community toilets for waste management are being planned in Varanasi. Other projects supported by JICA include the Yamuna Action Plan and sewerage system for the Hussain Sagar Lake at Hyderabad as well as at Amritsar, Bhubaneswar, Cuttack and Guwahati.

At a meeting on the sidelines of the recent UN climate summit in Paris, Abe had reiterated Tokyo’s readiness to assist New Delhi’s efforts to reduce pollution. Japan has promised to give 1.3-trillion yen ($10.6 billion) to developing nations by 2020 to help them implement policies against global warming. Japan gave a roughly combined 2 trillion yen for the same purpose in 2013 and 2014. It remains to be seen how Japan can aid India in reducing its carbon emissions.

The two countries have been expanding their economic engagement in recent years which witnessed a significant rise after a Comprehensive Economic Partnership Agreement (CEPA) was signed in 2011, which sought to take the bilateral trade to $25 billion.

The complementarity in relationship and commonality of objectives in the India-Japan partnership, given the present geostrategic environment, is significant. It is for the Abe-Modi chemistry to bring it to fruition.

Besides increasing trade, CEPA aims to eliminate tariffs on 90 percent of Japanese exports to India, such as auto parts and electric appliances, and 97 percent of imports from India, including agricultural and fisheries products, until 2021. Japanese direct investment in India totalled $21 billion between 2007 and 2013. India would also be eyeing a stake in the global supply chain of Japanese products.

Ironically, India along with China, South Africa, Indonesia, Ecuador, and Venezuela are engaged in a protracted trade battle with the US, the European Union, and Japan at the World Trade Organization (WTO) to ensure that the Doha Development Agenda (DDA) negotiations are not sidelined at WTO’s 10th ministerial meeting in Nairobi beginning on December 15.

The 2014 Tokyo Declaration saw both Japan and India upgrade their relations to that of a ‘Special Strategic and Global Partnership’. The India and Japan relations are also characterised by ever-deepening emphasis on military-to-military exchanges and joint exercises.

In October, Japan’s Maritime Self-Defence Force (MSDF) participated in the annual Malabar naval exercise for the fourth time and for the first time in the Indian Ocean since 2007. With the enactment of its new security legislation Japan is expected to expand the role of the MSDF in the Indo-Pacific.

Recently India, Japan, and the US shored up their trilateral partnership, pledging to support democracy and rules-based international order, and maintain maritime security through greater collaboration in the Indo-Pacific region.

The complementarity in relationship and commonality of objectives in the India-Japan partnership, given the present geostrategic environment, is significant. It is for the Abe-Modi chemistry to bring it to fruition.

One thought on “Shinzo Abe in New Delhi: A Growing Strategic Partnership”