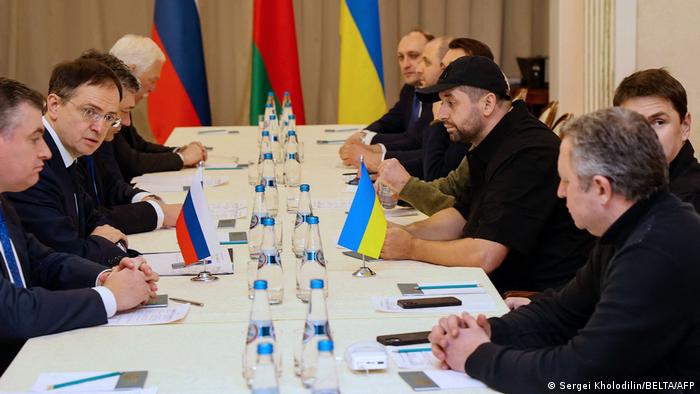 The ongoing Russia-Ukraine talks on the Ukraine-Belarus border are unlikely to succeed for the simple reason that the West does not want them to. Same is likely to happen in successive rounds also, if there are any. America’s protégé, Ukrainian President Zelensky (American protégé), has instructed his delegation leader for the talks to demand an immediate ceasefire and complete Russian withdrawal, which makes it a non-starter.

Over the years, the West has successfully thrived on ‘Divide and Rule’. Division of Germany, Koreas and India are examples, or for that matter the Sykes-Picot Agreement of 1916 between Britain and France after World War I. Ukraine’s western part was incorporated into the Soviet Union in 1939, when Stalin and Hitler divided the spoils.  Crimea, 60 percent of whose population is Russian, became part of Ukraine only in 1954, when Nikita Khrushchev, a Ukrainian by birth, awarded it as part of the 300th-year celebration of a Russian agreement with the Cossacks.

Western Ukraine is largely Catholic and the east largely Russian Orthodox. The US, therefore, patronized Ukraine’s Catholic west, while ignoring the promise not to expand NATO east of Germany. This is the ‘civil war’ or a mini civilization clash that the US engineered to rally the Europeans behind them, which is also witnessed today with anti-Russian protests all over. These protests will keep growing as the conflict continues.

After the shameful US withdrawal from Afghanistan, Europeans were quite cut up with the US. US President Joe Biden has, however, rallied them behind him on the following four counts:

Germany has already unveiled its remilitarization plan, including boosting military spending from 1.4 percent to above 2 percent of GDP. German Chancellor Olaf Scholz has also announced immediate investment of a whopping Euro 100 billion in new weaponry, like American F-35s and Israeli drones. This should ease the downhill ratings of Joe Biden – never mind America’s pusillanimous approach towards China.

James Heappey, UK’s parliamentary under-secretary of state for the armed forces, said in Parliament, “We must all in this house be clear that British and NATO troops should not, must not, play an active role in Ukraine. We must all be clear what the risk of miscalculation could be and how existential that could very quickly become if people miscalculate and things escalate unnecessarily.”

Above indicates that even Taiwan should only bank on external US-AUKUS-EU-NATO support, It has prompted former Japanese prime minister Shinjo Abe to question the American commitment to defend Taiwan in case of a Chinese invasion.

Despite American scholars, diplomats and strategists like George Kennan emphasizing that expansion of NATO in the post-Cold War period would be serious folly, American administrations did the opposite. Until 1990 NATO had 16 members. The additions made thereafter were: Poland, Hungary and Czech in 1999; Bulgaria, Estonia, Latvia, Lithuania, Romania, Slovakia and Slovenia in 2004; Albania and Croatia in 2009; Montenegro and North Macedonia in 2017, and; plans for 2021 were to add Bosnia, Herzegovina, Georgia and Ukraine.

In March 2014, Henry Kissinger wrote, “Far too often the Ukrainian issue is posed as a showdown: whether Ukraine joins the East or the West. But if Ukraine is to survive and thrive, it must not be either side’s outpost against the other — it should function as a bridge between them.” Kissinger had also said, “To treat Ukraine as part of an East-West confrontation would scuttle for decades any prospect to bring Russia and the West, especially Russia and Europe, into a cooperative international system”.

But the US never wanted a Russia-Europe cooperative system because that would make NATO redundant. Instead it wanted continued confrontation with Russia – just as Pakistan will not stop exporting terrorism lest the Pakistani military is returned to barracks. The dangers of Western expansion into Ukraine were well known but the American policy was to keep expanding NATO, to hammer down everything with the growing military muscle.

John Joseph Mearsheimer, eminent American political scientist and international relations scholar, advised on September 25, 2015 (just after Russia annexed Crimea in 2014) that Ukraine should have been kept as a neutral country between NATO and Russia, regretting that the US instead is propping up Ukraine, which will end up in destruction of that country. This is what the US has achieved.

The US-NATO is pumping in arms and money into Ukraine, albeit Israel did not permit the US to send Iron Dome batteries to Israel. Ukraine’s deputy defence minister has claimed that approximately 4,300 Russian troops have been killed in fighting so far and that Ukrainian forces have destroyed about 146 tanks, 27 aircraft and 26 helicopters of Russia.  Attacking forces no doubt are likely to get more casualties being in the open and not using carpet bombing like the West.

Russian forces must have suffered casualties but the figures given by Ukraine are apparently quite inflated. Otherwise with US-NATO backing them, visuals would have flooded the media with so many Russian tanks, aircraft and helicopters shot down. Apparently, the CIA slipped up in not providing some Hollywood war clips to Zelensky.

On the morning of February 28, Russian air defense systems shot down two Turkish Bayraktar TB2 drones 110 km southeast of Chernigov near the Bakhmach settlement. Ukrainian drones tried to hit the column of the Russian Armed Forces on the march, but did not succeed.

Russia has experience of the Battle of Stalingrad. So it is naïve to think that it will get bogged down with capturing whole cities. Instead, the Russian focus would be to encircle them and block the avenues of armament that the US-NATO is pouring into Ukraine. This includes the  Polish-Ukraine border. It is for this reason that Russia has put its Deterrence Nuclear Forces on combat readiness.

Western propaganda, without addressing Russia’s genuine security concerns, is that Putin wants to annex the whole of Ukraine and re-establish the erstwhile Soviet Union, whereas Putin wants Ukraine to be a neutral country, demilitarize it and install a government that does not play puppy to the West. Why else would the Russian man Chernobyl jointly with the Ukrainians? On the other hand if the US-NATO continues pumping arms into Ukraine, Russia will have no option to block the avenues. If the invasion was by America instead of Russia, all types of new technologies would have been tested, not just gas attacks in Syria and chemicals and defoliants used in Vietnam.

The Western agenda is to keep Ukraine on the boil. This will cause much more civilian blood to flow. The hands of US-NATO and EU will be equally bloodied, if not more though they dare not send troops to Ukraine other than proxy forces. Thousands of Ukrainians can die while the western arms industry makes money. This diversion proves America’s mortal fear in confronting China, which in turn proves the falling supremacy of American hegemony.

Finally, the danger is of an escalation by the strategist in Capitol Hill with NATO warning of counterattacks in case any Russian action spills into a NATO country. Russian attempts to block arms supplies into Ukraine through Poland may be misconstrued as an opportunity for NATO to intervene. Such a miscalculation could trigger a world war with Europe and Britain also devastated.

One thought on “Russia-Ukraine Talks will Unlikely Succeed”