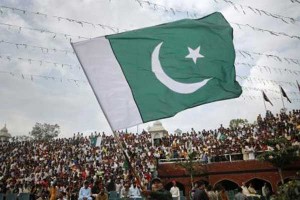 This is no Arab Spring. There is no Tahrir Square either. There is no spontaneous peoples’ movement. Only a movement led from the top and more a soup of four ingredients – one man’s ambition (Imran Khan), another’s opportunism (Tahirul Qadri), one man’s vendetta (Nawaz Sharif) and the fourth man’s reputation (General Raheel Sharif). Hyper vanity and hyper opportunism versus hyper panic and the Fourth Man wins.

There was great jubilation and back slapping in Pakistan and India when Asif Zardari’s PPP became the first government to complete its term in the history of Pakistan. Democracy, we were told, had arrived in Pakistan etc etc. Yet one year on, the Nawaz Sharif government seems to be in all sorts of difficulty. And it is not the Imran factor. That is only the symptom.

There is something bizarre and unreal in what is happening in Pakistan. Imran Khan, not particularly known for political sagacity, is being used to campaign on what is a non-issue.

Pakistan has been in all sorts of domestic turmoil in Balochistan and Khyber PakhtunKhwa, sectarian troubles and unending terrorism west of the Indus, extreme lawlessness and criminality in Karachi, a sagging economy and growing religious intolerance. These are not problems that Nawaz created; he inherited all of them from previous regimes. He created some others through his own ingenuity. For Nawaz to take on the might of the Pakistan Army by hounding former Army Chief General Pervez Musharraf was clearly a personal vendetta at a moment like this and clearly the army was not going to allow this to happen. Historically, no politician and no political party has won any confrontation with the army. In fact, the only wars the Pakistan army has won have been against its politicians, bar none.

Zulfiqar Bhutto, the founder of the PPP had decided to try and keep his pet project, the nuclear bomb project, under civilian control. The Army would not have this once they had decided that having the bomb was a good idea. Bhutto’s pretensions to cut the Army to size were his mistake and were possibly the main reason why they got rid of him in 1977. Zia hanged Bhutto for other reasons, most probably personal. Bhutto, even while in jail, had been arrogant with his own handpicked seemingly obsequious Army Chief General Zia who never forgot that. The PPP-Army feud never died down ever since then.

The rebirth of democracy after Zia’s assassination brought Zulfiqar’s daughter Benazir to power in 1988 despite desperate attempts by the Army to fix the elections and install their protege Nawaz Sharif. The army seemed to have lost this one but only temporarily. They succeeded two years later and Nawaz was in power. Nawaz had all the right credentials; he owed his rise to the Army, and was a Punjabi unlike Bhutto. The Army connived to get rid of Nawaz in 1993 to be replaced by Benazir, her brother was murdered in front of his house in 1996, his murderers never caught and she was thrown out of power later that year and eventually sent into exile by the Army.

Nawaz was back as PM again in 1996 and he made the same mistake as Benazir when he tried to get close to India thereby challenging the Army. When Prime Minister Vajpayee arrived in Lahore in February 1999, General Musharraf was leading his men in the infamous Kargil misadventure that pushed back dialogue and rapprochement. The General then assumed direct control of the country, jailed Nawaz and then threw him out of the country. The Indian Airlines hijack in December 1999, the attack on the JandK Assembly in October 2001, followed by the terrorist attack on Lok Sabha in December 2001, the Kalu Chack military establishment in May 2002 ensured that there was no dialogue with India. Peace overtures were to come later but only when General Musharraf as President was responding to renewed gestures from Prime Minister Vajpayee.

The terror attack in Mumbai in November 2008 was war by other means. It was a setback to India Pakistan relations and to Zardari himself who had been told by the General that it was too early to talk peace with India.

it was a matter of time before he had to call for elections and Musharraf had to quit. Like his two civilian predecessors Musharraf too left the country to take shelter abroad. He lived in considerable comfort in Maida Vale in London. By then, Benazir Bhutto, whom many considered Pakistan’s last hope for democracy in Pakistan, had arrived in Karachi in October 2007. This was despite advice from some friends who warned her that her life was in danger. She felt this was something she had to do for her people and country despite the certain dangers. Sure enough, there was an assassination attempt on the day she arrived and eventually her assassins got her in December that year. Attempts were made to fix the elections of 2008 to keep the PPP out. Instead, Asif Ali Zardari led his PPP to victory, but only just.

Zardari made the same mistake of talking peace with India, talked of putting Kashmir on the back burner and spoke of trade and business. The terror attack in Mumbai in November 2008 was war by other means. It was a setback to India Pakistan relations and to Zardari himself who had been told by the General that it was too early to talk peace with India. The rigged up Memogate was also designed to fix Zardari by involving his Ambassador in the US, Husain Haqqani in a memo he was accused to have sent seeking US intervention to prevent an army coup. And when Ambassador Haqqani arrived in Pakistan to clear his name, he had to take shelter in the PM house for fear that he might be whisked away by the all powerful ISI. The Long March by Nawaz Sharif in 2009 was another opportunity for the Army to intervene and tell the protagonists to make peace. From then on, Asif Zardari was allowed to remain President at the pleasure, of the General, despite various corruption charges against him that were held in abeyance but were clearly a threat to him.

Usually, political masters in Pakistan have been known to run out of steam after two years or so but in this case Nawaz seems to in trouble early in his second year. Having decimated the PPP and Imran Khan’s Pakistan Tehrik Insaf to only Khyber PakhtunKhwa, Nawaz presumed he was now the leader of the only political party left in the country. His single-minded pursuit of General Musharraf is inexplicable in a country where the army wields total power and cannot allow any action that appears to cast aspersions on the image of the army. Perhaps Nawaz has been led to believe that with such a massive victory at the 2013 elections, he has become invincible. Obviously the Army has other ideas. They are now using Imran Khan to cut the PML (N) to size and incidentally, this party is not to be seen anywhere in the current crisis.

Having fixed the PPP in the past, the Army is in the process of fixing the PML (N) with the help of the PTI which will be fixed in its time.

There is something bizarre and unreal in what is happening in Pakistan. Imran Khan, not particularly known for political sagacity, is being used to campaign on what is a non-issue. The state panicked and put out containers filled with sand and barbed wire concertinas to block the roads. The demonstrators retaliated with their own cranes to remove the containers and wire cutters to cut the barbed wires. Eventually, the crowds began to dwindle as the demagogy of both Tahir ul Qadri and Imran Khan failed to keep the interest of the crowds alive. Posters showing both Qadri and Khan supporting a Defence of Pervez Musharraf campaign are an indication of the way they may be operating to get the army’s support. Meanwhile, the political stalemate continues. Nawaz refuses to resign and Imran refuses to give up his demand.

The Army’s offer to sort out matters provided they were given more space is significant. Obviously, Nawaz and the others are being told early in the innings that space in this case means space regarding vital issues of security of prime concern to the army – India, Afghanistan, nuclear, China and the US. In its democratic sphere Pakistan may be playing with fire if some of its leaders think in terms of a revolution considering that these have lately ended as jihadi battles and chaos. Pakistan is still a long way to go before it evolves, if ever, into a democratic nation despite the hundreds of Pakistanis who hope for this and write about it.

The Pakistan Army remains the strongest political party in the country, the biggest business house and of course the strongest military force which is the protector of the realm and religion. Having fixed the PPP in the past, the Army is in the process of fixing the PML (N) with the help of the PTI which will be fixed in its time. The future is here.

2 thoughts on “Role of Pak Army in domestic turmoil”