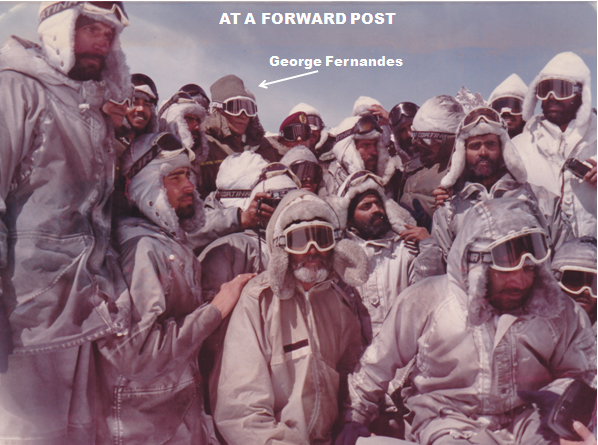 The norm in Siachen for visit of defence ministers before George Fernandes became defence minister, was to interact with troops at the Base Camp, fly over the glacier and hit back over Khardung La pass before the noon deadline. Some also visited Kumar Post, which was well in depth for about 5-7 minutes, and some also landed at a forward post for 1-2 minutes to wave at the troops with rotors running. No defence minister spent a night with the Siachen Brigade. The defence minister just before George Fernandes too followed this routine. During his first and last visit (defence ministers visited Siachen once in their tenure), gifted four satellite phones (INMARSAT) to the formation, which amusingly led to national dailies headlining ‘all communication problems of Siachen resolved’.  He also had the penchant of asking who were from his native place and wanted to shake their hands first.

When George became the Defence Minister and visited Siachen first time, he spent 20 minutes at Kumar Post, addressed the troops there and also rode a snow scooter. After the briefing at Base Camp, he looked at the map and asked if India had dedicated defence attaches’ in counties of Central Asia bordering China, asking the accompanying PS to remind him on getting back. He had already visited Siachen 10 times in the course of my two year tenure as commander, spending the night at the brigade headquarters many times, and had visited every forward post where helicopter could land, some even twice. He never wanted retinue of the Army Chief, Army Commander, Corps Commander or even the Divisional Commander to accompany him during his visits. His concern for the troops was the foremost. He enjoyed mingling with troops and sharing food with them. He had no personal demands and jotted in his notebook what improvements could be made for troop welfare and improving operational capacity. His PS, Ashok, would ring back from Delhi after each visit intimating what follow up action had been taken. During his second visit, he was witness to bodies of two soldiers brought out from a crevasse after few months and was visibly moved. With Ministry of Defence (MoD) bureaucrats holding up sanction of snow scooters and other equipment, he sent those responsible to spend time on the glacier.

George made it a habit to bring special pastries for troops in December in huge quantities, with instructions they must reach every forward post. During his visit to the Ordnance unit located close to Khalsar, George noticed a defunct windmill, which was meant to generate electricity for the in situ garrison. He was very annoyed; making a call from there itself, he asked the DRDO to get it repaired and functional in a month’s time. This was done much before the month’s deadline. Similarly, at the hospital at Hundar, George was witness to casualties from the glacier being treated and operated under artificial lighting in an archaic metallic facility designed by the DRDO. He quietly went in for fund collection through private contacts. It is to his credit that a two storey hospital with modern medical facilities stands at Hundar today, which George himself inaugurated in 2001. George visited the newly established Sub Sector Haneef immediately after the Kargil Conflict.

After the Kargil Conflict, George sighted me at showing of ‘The 50 Day War’ by Amir Raza and Virat Husain. He called me and asked me why being in Delhi, I had not called on him. My response was that I was only a Brigadier, to which he smiled. Two days later his PS rang up saying my wife and I were invited for dinner by the Defence Minister. His official residence had no gate and no guard. His drawing room was full of books and papers, and fax machine was installed. We had a simple meal and my wife appreciated the Alphonso mangoes. When we were departing George handed over a plastic bag to her with the same mangoes.

In 2003, George happened to see me at Leh airport and asked me how the Kargil Division was, of which I had assumed command. Upon hearing that some of the posts were worse off than Siachen; as cold but without snow clothing and equipment, he  made it a point to visit forward posts of Kargil Division the very next week, talk to troops and experience their problems for himself. Meanwhile, the case for snow clothing had already been taken up but his intervention perhaps speeded up the authorization.

One of the anecdotes he told me is worth mentioning here. Arriving at Srinagar one day, George was told a huge crowd had gathered at Baramula chanting Azadi. He decided to drive down to Baramula. Seeing him the shouting increased. Eventually, he held up his hand and asked “apko azadi chahiye? (do you want freedom), to which there was a unanimous shout of yes. He then said “hamen bhi azadi chahiye” (we too want freedom). There was stunned silence – here was the Defence Minister of India wanting freedom. He then explained that he meant freedom from corruption, unemployment etc, and went on to explain the state in rest of India. That was George’s style.

I last met him when he was admitted in AIIMS. He spoke in a low voice but was cheerful. It is to the credit of George Fernandes that HQ Integrated Defence Staff (IDS) came up but before it could be merged with MoD, which was the original aim, India’s Deep State, aka the Hamam, went into action. More than the Opposition, it was the Hamam that went all guns blazing to fix George in the so-called ‘Coffingate’, a charge that the Court absolved George completely years later. Knowing George, the Hamam knew he would step down; another defence minister would not have resigned. So, HQ IDS remains a separate entity. The Hamam is described in the 1993 Vohra Committee report; a powerful deep state running a parallel government in India. It is so strong that the Vohra Committee report concluded if names were revealed, few governments would fall – perhaps implying the Centre and few State Governments.

Keeping the military weak in consonance with their foreign mentors is an obvious aim of the Hamam.  It is for fear of the Hamam that the present majority government also could not muster the courage to reorganize the MoD and induct military officers on lines of the US Department of Defence (DoD). Same goes for establishing a Chief of Defence Staff (CDS) and merging HQ IDS with MoD. It was the pressure from the Hamam that saw the sacking of Naval Chief Admiral Vishnu Bhagwat, not by George alone. While conducting the Admiral on official visit in Japan and South Korea during July 1997, he had mentioned that the Hamam will find a way to sack him because he wanted joint development of submarines with South Korea whereas the Hamam wanted the HDW for fiscal gains. The Admiral’s prophecy came true within few months. Incidentally, government had asked the Intelligence Bureau (IB) to do an appreciation before sacking Admiral Bhagwat; what the repercussions would be? The IB got back saying government can do it once but should never try sacking a Service Chief a second time. That is why UPA II ‘created’ conditions for Naval Chief Admiral DK Joshi to resign, which Defence Minister AK Anthony more than readily accepted.

India never had a defence minister like George Fernandes and will probably never have; loved by troops not in Siachen alone but pan India. May God grant eternal peace to the departed soul.