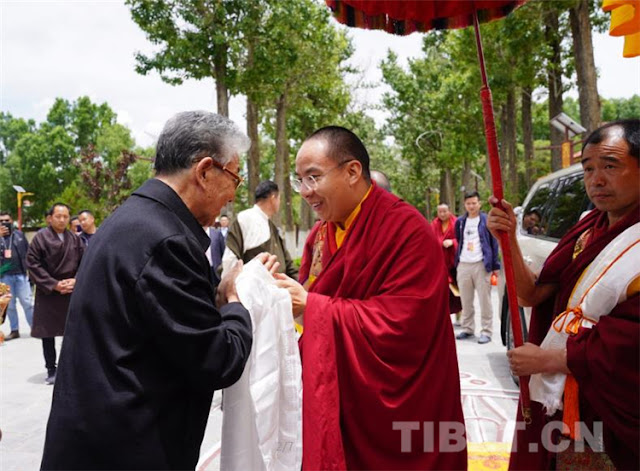 Rumours recently circulated about the Dalai Lama restarting negotiations with China. Nine rounds of fruitless talks were held between 2002 and 2010 between Lodi Gyari Rinpoche, the Dalai Lama’s Special Envoy and Zhu Weiqun of the Communist Party’s United Front Work Department.

Since then China’s control over Tibet has hardened; countries which earlier had some sympathy for the Tibetans, are now hostile.

Take the strange incident which took place at the Tribhuvan International airport in Kathmandu; The Himalayan Times reported: “Man labelled Dalai Lama’s agent, deported to US”.

Apparently the Nepal immigration mistook a Tibetan holding a US passport called Penpa Tsering arriving from the US, with his homonym the former Dalai Lama’s Representative in the US; Nepali officials argued that the man was ‘on China’s most-wanted list’. In Dharamsala, the former Tibetan Representative observed: “It clearly shows that the Chinese government’s pressure on Nepal is working.”

Nepal’s Home Minister Ram Bahadur Thapa affirmed that the deportation was only an act “of honouring the ‘One-China’ policy.”

A few weeks earlier, two members of Nepal’s Parliament, Ekwal Miyan and Pradip Yadav had to apologize for having attended the 7th World Parliamentarians’ Convention on Tibet, which was held in Latvia’s capital Riga between May 7 and 10, after Beijing pressurized Kathmandu.

In a joint press statement, the two MPs declared that they “happened to inadvertently attend the conference …due to wrong information …when they were on a private visit to Turkey, Switzerland and Latvia.”

They had even given speeches by mistake!

It shows how China can today dictate terms to ‘small’ countries like Nepal. This reminds me of what the 13th Dalai Lama, on his way to exile in India, writing to a British official in 1910: “Why do big insects always eat small insects?” More than 100 years later, the situation does not seem to have changed much.

In a similar incident with China, a Tibetan minister of the Central Tibetan Administration (CTA) in Dharamsala was denied a visa to attend a conference in Mongolia. Karma Gelek Yuthok, Minister of Religion and Culture was to attend the Asian Buddhist Conference in the Mongolian capital, Ulaanbaatar. For the minister, it was “the clearest sign yet of China’s aggressive campaign of undermining core democratic freedoms across the world, and even hampering the basic exercises of other countries through severe political intimidation.”

What could a Dalai Lama’s representative discuss with China in these circumstances? How could talks be meaningful?

Zhu Weiqun, recently came back from his supposedly retirement, reacted to Terry Branstad, the US ambassador’s visit to Tibet.

On June 9, he wrote in The Global Times, the mouthpiece of the Party, strongly criticizing the ambassador, who dared, according to him, to encourage Beijing “to engage in substantive dialogue with the Dalai Lama without preconditions.”

Not only was it blatant interference in China’s internal affairs, said Zhu, but he also questioned the meaning of a ‘substantive dialogue’. Though time and again the Dalai Lama has said that he wanted an association, not a separation from China, Zhu still considers the Dalai Lama a splittist.

Zhu Weiqun reiterated that there was nothing to discuss about Tibet, the ‘negotiations’ could only be about the condition of the Dalai Lama’s return to the Motherland and his status …in Beijing.

Beijing has other cards; it has taken a first step to nominate one day its own 15th Dalai Lama.

Gyaltsen Norbu, the Panchen Lama selected and groomed by Beijing has been elected as the President of the Tibet’s Branch of the Buddhist Association of China, replacing Drukhang Thubten Khedup, a Lama who had been officiating since 2003. Phagpalha Gelek Namgyal a stooge of the Communist Party since the 1950s was ‘invited’ to be the honorary president.

Interestingly, Gyaltsen Norbu recently visited Thailand; on his return to Beijing, he affirmed “that he was able to deeply appreciate the greatness of the motherland while he was in a foreign country.”

He was part of a Buddhist delegation led by Yanjue, the acting President of the Buddhist Association of China. It was Norbu’s first trip abroad, according to the Chinese media, which forgot that he had attended a conference in Hong Kong in 2012; of course, that was not counted as a foreign visit!

Norbu remarked: “We are fortunate to be in the era of the development and rise of New China, and thank the Communist Party of China for leading the Chinese people in achieving the tremendous transformation of standing up, growing rich, and becoming strong.”

In the meantime in Tibet, monks were invited to pass ‘legal knowledge’ examinations. Monks and nuns are supposed to specialize not only in the Teachings of the Buddha, but they need to grasp intricacies of mundane laws. The monks had to answer questions on the Chinese Constitution, the State Security Laws, Anti-Terrorism Laws, Anti-Spying Laws, Environmental Protection Laws, Internet Safety Laws and Regulations on Religious Affairs Matters. According to the statistics quoted by Xinhua, some 30,000 passed the examination.

Around the same time in Dharamsala, 45 regional chapters of the Tibetan Youth Congress elected new executive members and a new President, Tenzing Jigme who stated that economic and military development has no meaning unless matched by freedom for the people. He also declared: “Independence is our right. We are the rightful owners of Tibet. Irrespective of how strong China is we must continue to fight for our rights.”

If the Dalai Lama wants to negotiate a return to Tibet, he will have to take all this into consideration. The situation seems bleak today.

This article Red Start over Tibet appeared in Mail Today.

One thought on “Red Star over Tibet”