Pulwama : Hard Measures Except All Out War 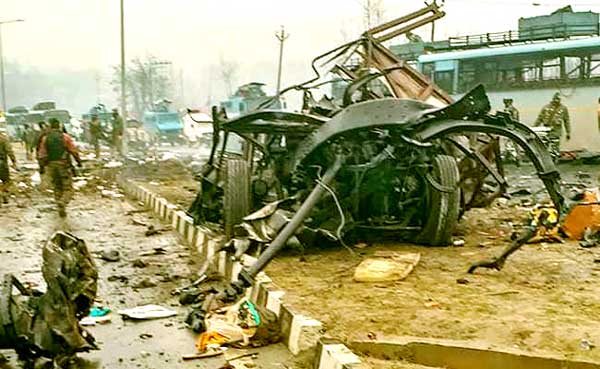 The death of over 40 CRPF personnel (estimates vary from 41 to 44 personnel) in one of the deadliest Fedayeen attacks in over two decades has sent the visual media into a tizzy.  All the TV channels are in competition with each other to increase their TRPs and have invited almost all the retired service as well as police officers and security experts, living in and around Delhi, to take part in debates giving their expert advice to the Govt.

The suggested measures includes from carrying out yet another ‘surgical’ strike to going in for fire assaults using missiles, drones and long range artillery deep into Pakistan to an all-out war to teach Pakistan a lesson, giving an impression that last three and half wars fought between India and Pakistan have left an unfinished agenda which must be completed now. The tough measures being bandied about, no doubt, appeal a great deal to the general viewer which has immense anger in their hearts against this gruesome act of terrorism. Quite a few of these so called ‘security experts’ have served in J & K in various capacities.

I wish to ask these experts why they did not implement these measures when they were in charge of operations there.  The pot of insurgency in J & K has been boiling since 1989 and we are into its 30th year now with no signs of a permanent solution to the vexed problem.

Nobody would disagree that Pakistani army and ISI are in collusion with the terror outfits operating from its soil. Can we stop them from doing what they are doing without going into an all-out war with that country? The answer is a big NO. But, is that the only problem? The answer also is NO.

What about the radicalization of the people of Kashmir Valley? The current attack on the CRPF convoy was the result of a local youth who had been thoroughly indoctrinated.  The stone pelters, the local population supporting the militants creating hurdles in the counter insurgency operations by security forces, the activities of the Hurriyat leaders and the covert support of some political parties are all responsible for the deteriorating situation in the Kashmir Valley.  Should we not begin from setting our own house in order before going in for the ultimate solution (if at all that is a solution) of going into an all-out war?

It must be remembered that wars have never been able to solve any problem.  The war only brings the nations to negotiating table where the solutions are found for establishing peace.

Having served in J & K and the NE in counter insurgency operations on numerous occasions, I wish to suggest a few radical ideas for consideration.

First and foremost, why have our intelligence agencies failed to eliminate the likes of Masood Azhar and party for almost two decades when we very well know that all such ghastly acts (Mumbai, Pathankot, Pulwama and many more before these) are the handiwork of these terror outfits? They must be hit at ANY COST before we even think of waging a war.

Secondly, why and how are the antinational elements like the Hurriyat leaders being offered security cover by our Govt.  Any person who acts against the national interests must arrange and pay for his/her own security and if he/she does not mend their ways, they must be acted upon like any other criminal.

Thirdly, why and with what motive did the Central Govt go in for a tie up with a known pro militant regional party to form government in J & K?  Didn’t it hurt and put back our ‘war on terror’ for those two years. We have all seen the videos of security personnel being beaten and ill-treated by the stone pelters during that period. The present J & K Governor has openly criticized the regional party for its antinational stance.  All political parties must refrain from repeating this mistake in the future, no matter what the motivation is.

Fourthly, there is no need to be soft on people who indulge in antinational activities. If they create hurdles in security forces operations or provide shelter to insurgents/militants, they must be put behind bars and acted upon legally, whatever be their numbers.  No cases against them should be withdrawn, like it was done in 2016, till there is an assurance that any future act of terrorism or support to terrorist will invite graver punitive action.

Fifthly, develop and provide machines to the civil police and PMF which can hurl stones up to a distance of say 50 meters or so to be used against the stone pelters.  This will satisfy the judiciary and the human rights activists who feel that the security forces are using excessive force while dealing with the misguided youth.  As far as the Army is concerned, it must not use any means other than those authorized to it for dealing with an enemy or in aid to civil authority.

Sixthly, till about two decades ago, there was a trend of moving convoys on alternate days from Jammu and Srinagar.  On the day the ‘Up” convoy was to move from Jammu, no vehicle was allowed to move ‘down’ towards Jammu and vice versa. Today, with better road communications, convoys as well as single vehicles are allowed to move in both directions simultaneously.  When the security situation is bad in an area, the older system may be better.  People have to choose between convenience of movement or support to militancy. The rhetoric about non adherence to SOPs during movement or adequate space between vehicles or number of vehicles (70 to 80) or people (2500 or so) are all peripheral issues which become irrelevant when the road is open for only three to four days in a month due to inclement weather.

Seventhly, the Indian Army has brought the security situation in the Kashmir Valley to a level which could then be managed by the para military forces(PMF) on a number of occasions during these three decades, but every time the situation has gone from bad to worse. Some of the major reasons for this are the operating pattern, command and control structure and the age profile of the PMF personnel. As far as the weapons are concerned, security forces possess the best weapons that are required in a counter insurgency environment.  We don’t require heavy weapons like the artillery guns, rockets and missiles. It is the man behind these weapons whose motivation and training levels have to be the best.  Unlike the Army, PMF operate with leadership provided by the Inspector level officers.  Their senior officers seldom move out of the cozy confines of their offices.  This fact is evident from the casualties suffered by army officers vis-a-vis those of the PMF or civil police.  The Army personnel have a far younger profile than their counterparts in the PMF and civil police who work till the age of 60 years.  Obviously, their functional efficiency suffers with increase in age. The CRPF has completed 80 years since it came into being.  It is time the PMF gets its own officer cadre who would have better affiliation with its personnel rather than importing officers from other cadres.

In the end, it is essential that the media acts responsibly and does not resort to rhetoric thereby raising passions of the general public.  The speakers who come to take part in debates give suggestion which are impractical and would, in the long run, deteriorate the situation which may become difficult to handle. If a person is determined to kill himself, it may be difficult to stop him from launching Fedayeen attacks. However, the need is to reduce such attacks as much as possible by eliminating their supporters and perpetrators.  It must be remembered that crossing the LC/border and teaching Pakistan a lesson is possible, but at what cost and can anybody guarantee, if the lesson will be remembered by the adversary.  If that assurance is available, we must resort to the ultimate option.

4 thoughts on “Pulwama : Hard Measures Except All Out War”