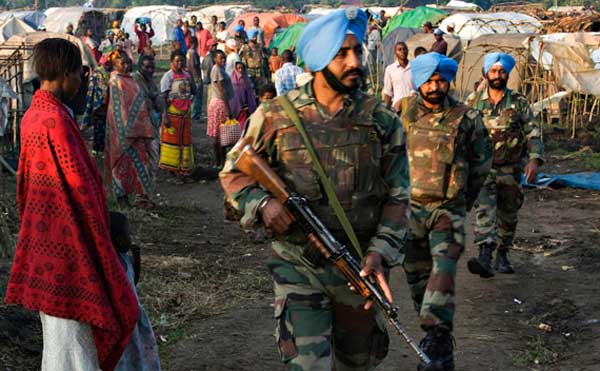 Peacekeeping is a major tool in resolving conflicts and making the situation favourable for peace. Peacekeeping forces have been playing a very important role in a region and their role is constantly evolving and growing along with the needs and demands of current situations. It is a response mechanism of international communities to resolve a global crisis. The objectives of peacekeeping operations are to avoid further conflict, stabilizing the situation, and restoring sustainable peace.  With change in time and values along with situations, crisis has changed; to deal with these new situations peacekeeping missions too need a new mechanism for operation.

Peacekeeping missions have now been diversified, as they comprise of large number of components including military, civilian police, political, civil affairs, and rule of law, human rights, humanitarian, reconstruction, public information and gender.

Peacekeeping missions have grown since their establishment in 1948 and their mandate has grown to make their mission more effective. They began their operation as an observer, equipped with monitoring, reporting and confidence building mechanisms. With the varying conflicts, peace enforcement teams and diversified peacekeeping operations came into force. As individual sovereignty and human rights being more important, the UN charter supports both the importance of human rights and simultaneously the importance of state sovereignty. Hence the role of peacekeeping operations in the coming years is an important question which needs to be addressed.

A framework has to be developed to resolve the barriers in peacekeeping operations; important decisions such as expansion of current mandate, developing timely response mechanisms to deal with emergency situations, and executing jurisdiction of peacekeeping operatives, are important to discuss. Issues such as recruitment and financial assistance of peacekeeping operations are important as it can open doors to manipulation and political influence. Further the responsibility to protect (R2P) is an important issue that needs to be factored-in,  in the wake of recent conflicts. Hence it is imperative that we achieve what we have aspired for long, to make the rule of law standard rather than optional during an international crisis.

United Nations began its peacekeeping mission in 1948, when the first contingent of peacekeeping observers was sent to monitor the armistice deal between Israel and then Arab world. This contingent came to be known as the United Nations Truce Supervision Organisation (UNTSO). It is operational today with numerous member nations volunteering their troops along with logistic support to foster peace in a conflict environment and to maintain ceasefire in the region. The United Nations Military Observer Group in India and Pakistan (UNMOGIP) launched in 1949 is yet another example. It is tasked primarily to oversee the ceasefire between the two nations. However, India does not recognise the validity of this Group.

Earlier the missions were limited to being observer in nature and peacekeepers were unarmed. The first armed mission involved United Nations Special Emergency Force (UNSEF) which carried their operations in 1950, Egypt. The Suez Canal was nationalised by the Egyptian President  Nasser, which resulted in an armed response from France, Britain and Israel. The matter was deliberately discussed in the General Assembly and the Uniting for Peace Resolution i.e. the Resolution 377 (V), 1950 was passed. as, ironically, the matter was vetoed in the Security Council.

…it is not necessary that all peacekeeping missions involve combat, United Nations Peacekeepers are also involved in large non combat missions.

A major peacekeeping operation was launched by United Nation’s operation in Congo (UNOC) in the then Congo from 1960 to 1964. The mission was very important to maintain ceasefire in the region plus the large amount of peacekeeping soldiers in hand, which were at that time at its peak. The mission was to assist the newly established Congolese government and to maintain peace and security in the region. However the governments “working model” and “operating mechanism” were openly challenged by Belgium.

Since the end of the cold war, an evolution in peacekeeping has occurred. However a large number of peacekeeping missions still operate on “traditional” model. These operations include ceasefire observatory missions and patrolling buffer zones by peacekeeping soldiers who may or may not be armed and are widely known as blue helmets or blue berets because of their blue headgear. Although it is not necessary that all peacekeeping missions involve combat, United Nations Peacekeepers are also involved in large non combat missions.

It will not be wrong to say that Peacekeeping missions have now been diversified, as they comprise of large number of components including military, civilian police, political, civil affairs, and rule of law, human rights, humanitarian, reconstruction, public information and gender. The mandate has been broaden and more duties and responsibilities are assigned to them. This has been done so, to make demands with current situations as they are not only involved in intrastate affairs but also in civil wars and internal conflicts. Their mandate comprises of upholding and protecting human rights, facilitating the political process, stabilizing governments, disarmament and re-integration of ex- combatants, and if requested provide assistance during elections. Some operations do not require combat but they also work along international development organizations as a multidimensional peacekeeping organization.

From 1988, the UN peacekeeping operations have been increased substantially. The number of Peacekeepers rose from 11,000 to 75,000 during the conflicts of 1988 to 1994, with 20 new bases of operations within nations such as El Salvador and Namibia. The deployment of United Nations Transition Assistance Group (UNTAG) in 1989, is one of the major success in peacekeeping operations.

The UN Operation in Somalia and the “Operation Desert Storm” in response to Iraq’s invasion of Kuwait were the two important examples that showed the importance of UN peacekeeping in the region.

Peacekeeping is of enormous importance in the globalised  world and its importance increase more when we talk about its meaning and definition. However the important principles of UN peacekeeping are:

These principles are designed in a manner that restricts the movement of peacekeeping soldiers on the ground and they are confined to a mere observer status that too, if the host nation agrees. This is a classical model of peacekeeping, which still exists however the so called doctrine of peacekeeping as evolved, making it capable enough to handle any situation.

In 1992, the then United Nations Secretary General Boutros Boutros Ghali published a report “Agenda for Peace”, explaining the necessary changes in peacekeeping along with situations beyond cold war. The report stated importance of more profound understanding of situations and actions taken by peacekeeping forces in complex situations. The report focussed on 3 P’s, Peacemaking, Peacekeeping, and Peace building. Peacemaking primarily involved diplomatic talks in an effort to negotiate peace with the hostile parties. Peacekeeping comprised of necessary steps involving deployment of UN peacekeeping forces and their rules of engagement in the region. Peace building was designed to deal with post conflict situations and improving the situation in the region. It focuses on social and economic development and rehabilitation. These were the three important points that would make an appropriate mandate to the mission on ground. The United Nations Operation in Somalia (UNOSC) and the “Operation Desert Storm” in response to Iraq’s invasion of Kuwait were the two important examples that showed the importance of UN peacekeeping in the region.