Peace: A High Hanging fruit between India and Pakistan 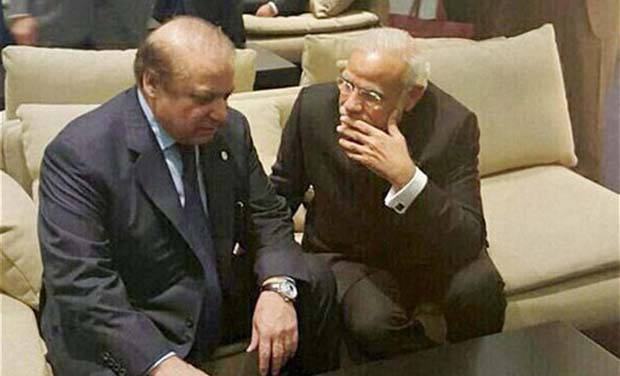 Associated with the common cultural roots and history, yet separated by borders peppered by bullets, and the ever present threat of war is the unfortunate saga of relationship of two neighbours, India and Pakistan. After independence, India and Pakistan have shared the relationship of love and hatred, punctuated by four major wars of 1948, 1965, 1971 and 1999 and many other skirmishes’.

…the policy of Pakistan toward India did not change and the constant support of Inter Services Intelligence (ISI)  to terrorist organizations to shatter peace and stability in India generated a severe threat to the Indian security establishment.

However, post 1990s, both the Countries endorsed the need for peaceful relations by successfully ratifying the Lahore Declaration and committed to finding a solution on the issue of Jammu and Kashmir. Through the medium of bus diplomacy, Indian Prime Minister Atal Bihari Vajpayee shared his vision of peace and stability with his counterpart Prime Minister Nawaz Sharif. Both Countries pledged to “take immediate steps for reducing the risk of accidental or unauthorized use of nuclear weapons and discuss concepts and doctrines with a view to elaborating measures for confidence building in the nuclear and conventional fields, aimed at prevention of conflict”[i]. However outbreak of the Kargil war hampered the all hopes of peace between India and Pakistan.

The Kargil war broadly underlined the ‘war sick’ mentality of Pakistani military, which was unwilling to move towards a peace building initiative between the two countries. The Kargil war not only hampered the evolving friendly relations between India and Pakistan but also disturbed peace and stability in South Asian region. After the war, under severe international pressure, both countries came together on a single platform for peace and friendship in the 2001 Agra Summit. The Agra Summit began with high hopes to sort out the decades old territorial dispute. These high hopes were the outcome of the initial optimism of political leadership in the both countries.

On one hand, the then Indian President K. R. Narayanan assured to take “bold and innovative” decisions. While on the other hand, his Pakistani counterpart President Musharraf expressed his point of view regarding the summit using phrases such as “cautious optimism”, “flexibility” and “open mind”[ii]. However, the Pakistani President’s uncompromising stand on the issue of support to the cross border insurgency in Jammu and Kashmir and failure in winning the confidence of the Indian political leadership were among a few reasons behind the breakdown of talks.

Though Pakistan had always denied its involvement with any terrorist organization, its warm relations with Lashkar-e-Taiba and Jaish-e-Mohammed were always visible.

Additionally, in the post Agra Summit period, the policy of Pakistan toward India did not change and the constant support of Inter Services Intelligence (ISI)  to terrorist organizations to shatter peace and stability in India generated a severe threat to the Indian security establishment. In the same year, Pakistan-based terrorist groups namely Lashkar-e-Taiba and Jaish-e-Mohammed attacked Indian parliament leading to an infuriated blame game between the two. Though Pakistan had always denied its involvement with any terrorist organization, its warm relations with Lashkar-e-Taiba and Jaish-e-Mohammed were always visible.

According to Daily Telegraph, Pervez Musharraf himself accepted Pakistan’s involvement with terror groups to achieve their geostrategic goal. The Pakistani government did not take any strict action against people involved in various attacks on India, for example Masood Azhar, Hafiz Muhammad Saeed and Zaki-ur-Rehman Lakhavi, who are even at present spewing venom through Anti-Indian statements. Ajmal Kasab’s confession regarding ISI’s involvement in the 26/11 Mumbai attack,  open support to Zakhi Ur-Rehman Lakhvi and the confessions of other two terrorists (Naveed and Sajjad) who were recently caught alive during  an ambush in Jammu and Kashmir by the Indian army authenticated Pakistan’s involvement in the cultivation of terrorism in India.

Since the NDA government has been in power, India has taken initiatives in establishing warm relations with its neighbours. This can be witnessed through invitations extended to heads of South Asian countries on the occasion of Prime Minister Narendra Modi’s oath taking ceremony. Pakistani counterpart Nawaz Sharif also registered his presence in the ceremony. Initially, it was expected that a fresh start would convert towards positive direction, but the mounting tension on the borders through ceasefire violations started a “war of statement” between both the countries. The situation turned aggressive when Indian Defence Minister Arun Jaitley advised Pakistan to stop “unprovoked” firing otherwise India’s response would be “unaffordable”. [iii] In response to Jaitley’s statement, his Pakistani counterpart Khawaja Asif reacted assertively and said “we don’t want to convert border tension between two nuclear neighbours into confrontation”[iv]. Minister of Interior Chaudhary Nisar Ali Khan noted that the army would protect the country’s independence, integrity and national security at any cost.[v]

Pakistan’s proclamation regarding the use of tactical nuclear weapons against India again escalates the problems between the two countries.

The seriousness of the situation reflected in the Indian Prime Minister’s statement in which he assured the people of India that “we [Government] will not let down our country” and “everything will be fine soon”[vi]. He tried to convince the countrymen that the situation is not that tense. But at the same time, his words highlighted the gravity of the situation. When he expressed that “everything will be fine soon”, it was easy to understand that something is not well on the border.

The meeting in Ufa (Russia) between the Indian Prime Minister and his Pakistani counterpart acknowledged that the improvement in India- Pakistan bilateral relations would ‘greatly enhance’ prospects for lasting peace, stability, and prosperity in the region. It lighted the candles of peace in the region but just a day after change in Pakistan’s stand, it filled the path of peace with hurdles. Furthermore, the cancellation of National Security level talks between both the countries restarted the war of words. Home Minister Rajnath Singh charged Pakistan  “responsible” for moving away from the Ufa agenda, while Khawaja Muhammad Asif blamed India of “sabotaging” the NSA level talks with its ‘fanatic approach’.[vii] At the same time, the sound of bullets was breaking the hopes of peace in areas proximal to the International borders.

Though the clouds of tension are circling South Asia at present, a single positive change can turn the table from war to peace.

The Scope of Peace Negotiations

At present, the condition of peace between India and Pakistan is like a high-hanging fruit, which can only be achieved if, both country pools in their mutual efforts. If Pakistan changes its attitude towards the issue of cross-border terrorism and unprovoked ceasefire violation, it will reduce India’s aggressiveness toward Pakistan, as well. But Pakistan’s proclamation regarding the use of tactical nuclear weapons against India again escalates the problems between the two countries. Pakistan’s deepening closeness with China is another important factor in India-Pakistan relations.

Currently, China is engaged in various construction projects in Pakistan such as the China Pakistan Economic Corridor (CPEC)-which intends to link the Gwadar Port to the region of Xinjiang (which also contains the disputed territories of Aksai Chin), road and tunnel construction in the PoK, and building up the biggest solar power plant in Pakistan. These engagements have generated a trust deficit among major South Asian regional players (India, China and Pakistan). Though the clouds of tension are circling South Asia at present, a single positive change can turn the table from war to peace. The civil society actors in both countries largely emphasized the necessity of normalization of relationship between the two. Master Blaster Sachin Tendulkar and Noble Peace Prize laureate Malala Yousafzai, strongly advocated the need of improvement of relationship between the two countries.

[v] The Dawn, Will not accept India’s domineering in the region says Nisar,  URL: http://www.dawn.com/news/1137085/will-not-accept-indias-domineering-in-the-region-says-nisar

2 thoughts on “Peace: A High Hanging fruit between India and Pakistan”