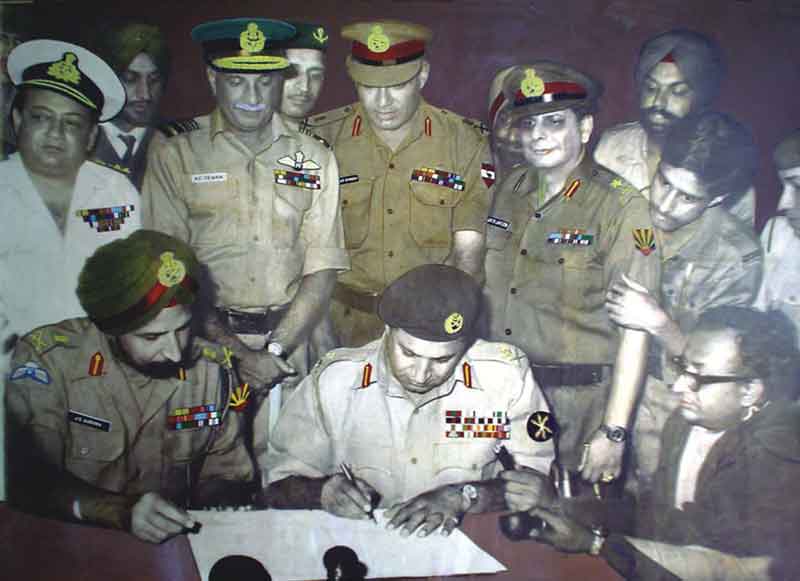 1971 War: The victor and the vanquished, signing the Instrument of Surrender

What began as “Operation Searchlight” conducted by the Pakistan Army in the then East Pakistan 50 years ago had its denouement in two ways: a violent separation of that province leading to the birth of Bangladesh; and a high-level inquiry into why and how that happened. Pakistan has moved on without acting on the recommendations made by the inquiry commission headed by a top judge, who happened to be a Pakistani Bengali.

This is the story of a judge who took on both the military and the political class of Pakistan that brought shame and defeat in 1971. Asked to investigate the “failure” that led to the secession of its eastern province and birth of Bangladesh, the judge went well beyond his brief and held the military and political class responsible – only to find his report suppressed and buried in his lifetime.

He was officially told that he had exceeded his brief. The powers that be announced that the report had gone missing, only to declassify it 25 years later when it got leaked to the media in Pakistan and India.

Justice Hamoodur Rahman was Pakistan’s only Bengali judge who retained Pakistani citizenship and did not migrate like millions of Bengalis who repatriated to Bangladesh. Old-timers recall that he was somewhat unhappy at being addressed in Bengali by journalists while in New Delhi for a global conference.

Born in Patna, educated in Kolkata and in London, Rahman belonged to an illustrious Bengali family of professional doctors and lawyers, some of whom also took to politics. He practised at Calcutta High Court before opting for East Pakistan on partition and moved to Dhaka. He was Vice-Chancellor of Dhaka University and held many other high posts.

He was nominated as the seventh Chief Justice of Pakistan (CJP) by Chief Justice A R Cornelius, an Agra-born Anglo-Indian who remains the only non-Muslim CJP, not counting Rana Bhagwandas, a Hindu, who had briefly performed as acting chief justice.

The appointment was made by then president Ayub Khan in November 1968. When months later, Ayub, besieged by political protests ‘invited’ Gen. Yahya Khan, then army chief, to take over as the chief martial law administrator and it was challenged before the court, Justice Rahman held Ayub’s act illegal but allowed its continuance under the “Doctrine of Necessity.”

This doctrine has come in handy for Pakistan’s top judiciary each time there has been a military takeover, namely by Gen. Ziaul Haq and Gen. Pervez Musharraf. It’s most prominent proponent was Sharifuddin Peerzada legal luminary and one-time Attorney General.

Rahman did not support the independence of Bangladesh and remained quiet throughout the events, as per records of that era. He administrated the oath of office to Zulfiqar Ali Bhutto as president of Pakistan in 1971 at the Supreme Court building.

Justice Rahman served as CJP till 1975 performing simultaneously, several duties, including chairing of the Hamoodur Rahman’s commission of inquiry into the 1971 war.

The commission was instituted by the government of Bhutto. But in his report submitted in 1975, Rahman criticised Bhutto’s role as well.  The report went deep into the role and the failure of the political class that led to the conflict in the eastern province and the eventual war that the military lost.

The commission led by Rahman conducted several interviews of Pakistan military’s senior officers, bureaucrats, politicians, activists, and the Bengali nationalists. Criticism on the government and misconduct of civilian politicians were very heavy and intense.

The report explores several issues including the killing of thousands of East Pakistanis – both civilians and ‘Bengali’ soldiers – rape, pan smuggling, looting of banks in East Pakistan, drunkenness by military officers, even an instance of a one-star rank officer ‘entertaining’ women while their troops were being shelled by Indian troops.

It concluded that Yahya Khan had failed to explore all the issues that the political situation post the 1970 elections’ outcome confronted. It indicted Bhutto and, up to a point, implicated him for misleading Yahya Khan and the top military brass.

Of these generals, Tikka Khan went on to be the Pakistan Army chief and Rao Farman Ali was a staff officer of Gen. Zia ul Haq, who took power after toppling Bhutto.

Gen Niazi, who led the surrender in Dhaka and was a prisoner of war (POW) in India, gave his side of the story before the commission and later wrote a book. The commission dwelt on the circumstances under which he surrendered and also whether he should have taken orders from Yahya Khan’s office and surrendered at all.

Several fellow officers deposed against Niazi who, the commission noted had ties with women of ill-repute before moving to Dhaka. With a son engaged in the paan (betel nut leaf) trade, he was also accused of corruption.

Despite the commission recommending field court-martial, there was no actions taken by Bhutto or the successive governments. The report went missing under President Zia.

As per unverified accounts in Wikipedia quoting official records: “When the report was submitted the then Prime Minister Bhutto, the Prime minister wrote to the chairman War Enquiry Commission Chief Justice Hamoodur Rahman, that the commission has exceeded its limits. The commission was appointed to look into the military “aspect of debacle”, not the aspect of political failure; therefore, Bhutto classified the publications of the commission and marked its report as “Top Secret.”

In the 1990s, investigative journalism by Pakistani daily News International revealed that the report was held secretly at the Joint staff HQ in Rawalpindi. In 2000, a portion of the report was leaked by India Today and the Dawn. Its copyrighted version was published by Vanguard Books (p) Ltd, Lahore, with the line, “as declassified by the Government of Pakistan.” The publisher said: “No bookshelf on Pakistan is complete without a copy of the report.”

It is significant that Justice Rahman remained in office, went into retirement well respected, remained active thereafter and performed legal work with the United Nation and was a member of the Commission on Crime Prevention and Criminal Justice. After his death, fellow judge Senior Justice Khalil-ur-Rahman Ramday hailed him for his “patriotism and honesty.”

The five-year effort of Justice Rehman and two high court chief justices, and their damning indictment, seem to have made no impact either on the political class or the military in Pakistan in the long run. Half-a-century hence, little has changed, with Pakistan’s polity being characterised by the army’s overbearing and controlling presence, without perhaps any accountability.