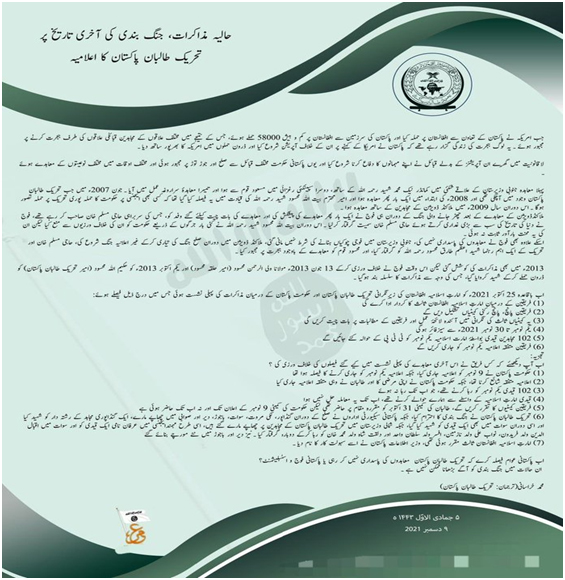 The one-month long ceasefire between Pakistan and the Tehrik-i-Taliban Pakistan (TTP) brokered by Taliban’s Interior Minister Sirajuddin Haqqani which began on November 9, 2021, is over. Now the TTP has issued an official statement (also on Twitter – @PatilSushmit) accusing the Pakistani government for not fulfilling their promises like releasing TTP fighters from prison which had been agreed to while negotiating the ceasefire.

The statement further says that the TTP had respected the ceasefire. However, the Pakistani government during the agreed month-long ceasefire violated all the agreed rules by conducting raids, killing TTP fighters and arresting them in addition to setting up new outposts of security forces in the region. Most importantly, the TTP statement says that under these circumstances, it is not possible to extend the ceasefire.

Before the ceasefire agreement, the TTP was consistently targeting Pakistani security forces and their supporters. Noor Wali Mehsud, Emir of TTP, had told CNN that he wants to make tribal districts of Pakistan “independent”. Ground reports indicated that many areas in Waziristan had fallen to the TTP and the group’s influence was growing in other areas of Khyber Pakhtunkhwa (KPK) also. It was Pakistan that was beseeching the Taliban to help broker a ceasefire with the TTP which resulted in talks between the TTP and Pakistan government at Doha.

About 120 TTP fighters are in Pakistani prisons. TTP wanted them released before the talks but their release was eventually part of the ceasefire agreement. However, Pakistan did not release TTP fighters and continued to target the TTP during the ceasefire. TTP supporters posted a series of videos showing Pakistani aircraft and helicopters destroying ‘mosques’, houses and killing civilians in KPK, especially in areas of Mohmand Agency, Doizai, Anbar, Sheikh Baba, Chamarkand, Mahai and Shamsha.

Why has the Pakistan government, which meekly surrendered to the virulently radical organization like the Tehreek-e-Labbaik Pakistan (TLP), broken its ceasefire agreement with the TTP? In the case of TLP, Pakistan released 860 TLP cadres from prisons as also TLP Emir Saad Hussain Rizvi and lifted the ban on the organization. One of the after effects of surrendering to TLP was recently in Sialkot where Priyantha Diyawadana, a Sri Lankan national who worked as general manager of a factory of Rajco Industries in Sialkot, Pakistan was attacked by a mob and killed for alleged ‘blasphemy’ for removing TLP posters with messages inside the factory.

Every bone of Priyantha Diyawadana was reportedly broken before he was burned in open with a mob of hundreds howling around. The Sialkot police was nowhere to be seen in the video seen worldwide.  Pakistan has made some arrests but nothing much should be expected because those arrested are obviously TLP cadres.

Pervez Khan Khattak, Pakistan’s defence minister who earlier served as chief minister of KPK, justified the heinous crime saying, “There were children, adults who were influenced by the Islamic faith.…. It was no reaction to any action. They raised slogans that it was an act of blasphemy… It is a matter of faith. Even I can come under its influence and commit a crime.” This implies that if Khattak was present in Sialkot, he too would have joined the killing spree after being influenced by slogans (sic). If these are public views of the defence minister of Pakistan, God help that country.

Many reasons could be attributed to Pakistan breaking the ceasefire with the TTP that was so laboriously worked out. One view is that Pakistan may have thought if the 120 TTP fighters cadres are not released, TTP would extend the ceasefire. But that is naïve because the TTP was earlier continuing to attack the Pakistani establishment despite these cadres in prison. Another view is Pakistan concluded that releasing these 120TTP fighters would embolden the TTP further. But if this was the case, then why agree to their release as part of the ceasefire.

A third view is that Pakistani military thought the month-long ceasefire could be used to bomb the hell out of the TTP. If so, this would be the most stupid reason because Pakistan has been conducting aerial and artillery bombings past decades. In the instant case, bombing of mosques would enrage the TTP, TLP and ISIS more in a country where the defence minister says he could himself indulge in lynching and killings if he heard slogans of faith?

But the most likely reason for Pakistan breaking the ceasefire with TTP is because Pakistan’s foreign, defence, terror generation and counter terrorism policies which till recent years were defined and executed by the Pakistani military have since a Chinese override. The most recent example is Pakistan pulling out at the last minute from US President Joe Biden’s virtual ‘Democracy Summit’ even though a South Asian nation like Bangladesh was not invited.

Imran tried to mend fences with the US at the Conclave by saying that Pakistan wants to play the role in bridging gaps between the US and China; what Pakistan did during the Nixon presidency in America. But then it was the Nixon-Kissinger duo who sought Pakistan as the intermediary – which is no more the case today. As expected, Imran did not lose the opportunity to rant about Kashmir. He said that the biggest problem keeping South Asia hostage is the Kashmir issue and that his government had reached out to India for peace but did not get a positive response. The fact remains that Pakistan’s double role in Afghanistan has created a situation that is a threat to not only South Asia but the world at large because of the concentration of terrorists in Af-Pak.

Naturally Imran was mum about: Pakistan’s continuing proxy war on  India – terror attacks, infiltration, drones carrying weapons, narcotics smuggling; Pakistan’s double game to coax the US into handing over Afghanistan to Taliban; Pakistan’s NSA refusing to attend the multinational NSA Summit on Afghanistan in India on November 10, and; Pakistan’s delegation that arrived India on December 6 to participate in the cyber security seminar hosted by India under framework of the Shanghai Cooperation Organization (SCO) Regional Anti-Terrorism Structure (RATS).

China has been actively supporting Pakistani terrororist organizations, propped up Pakistani terrorist leaders even at the United Nations, shored up Pakistan’s proxy wars against India and Afghanistan, supported Taliban in conjunction Pakistan, and gifted Pakistan attack helicopters for the genocide against the Baloch population in Afghanistan. But of late, Chinese genocide against the Uighur and Muslims in Xinjiang has created the environment of a blowback which is gaining momentum. There are reports of both Taliban and TTP cadres joining the ISIS-K in calling for revenge against China and freeing Muslims in Xinjiang from Chinese tyranny.

This is going to affect the Chinese plans for investments and development projects in Afghanistan as well the projects related to the China-Pakistan Economic Project in Pakistan. Pakistan should expect more violence with the TTP calling off extension of the ceasefire agreement. Pakistan surrendered to the TLP but mishandling of the truce with TTP will cost it more. Apparently, Pakistan has still not gauged the strong Talban-TTP links as it inches towards Talibanization.

One thought on “Pakistan-TTP Honeymoon Ends”