Pakistan - On a treadmill, going nowhere 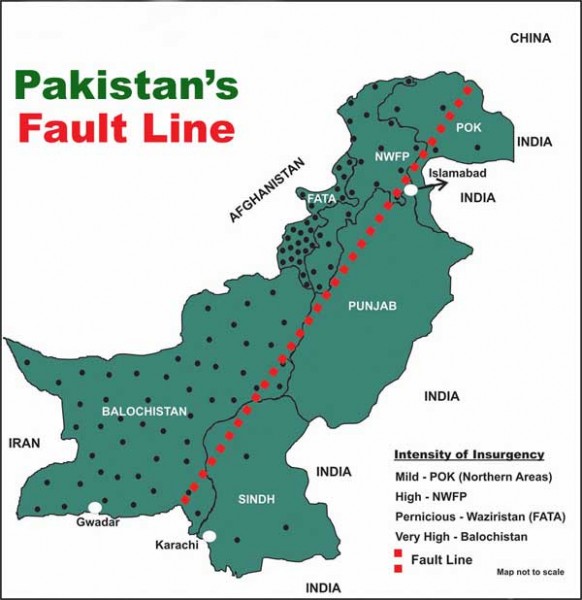 The former Army Chief and self-appointed President Pervez Musharraf is to be tried, but the issue drags on as the army is increasingly uncomfortable with the prospect that a former head of their all-powerful institution will be tried – and horror of horrors – actually sentenced by a civilian administration.

Violence manifests itself in various forms in that country today – sectarian, ethnic, nationalist, religious and criminal.

Meanwhile, Pakistan is caught in a pincer, not the kind that they feared all these years of a military kind, but by two democracies electing their representatives in Afghanistan and India, while Pakistan itself remains in the grip of home grown violence of the worst kind.

Violence manifests itself in various forms in that country today – sectarian, ethnic, nationalist, religious and criminal.

Just consider what happened in the last two weeks. There have been killings in Sibbi and Kalat (Balochistan), Islamabad, Hyderabad (Sindh) and in FATA where recent reports indicate that various groups are fighting each other when not engaged in fighting the Pakistan security forces.

The fate of the talks between the government and the Taliban remains uncertain as the Taliban continue kidnapping more and more civilians and seek exchange of Taliban prisoners. Violence by Baloch nationals and counter-violence of various kinds including enforced disappearances organised by the Army and para-militaries in Balochistan continues even as it remains largely unreported in a world more concerned with Syria and Ukraine or as in India, with domestic issues.

The killings in the wholesale vegetable and fruit market in Islamabad by an unknown group has broken the peace the Sharif Brothers had worked out with various militant groups before the elections last year to keep Punjab incident-free and the PML (N) had used the ultra-radical Sunni Ahle Sunnat Wal Jamat (the other name of Sipah e Sahaba) for their election campaigns. Maybe it is payback time now. One of these possibly is that the Wal Jamat chief Maulana Ahmed Ludhianvi has been declared elected to Parliament by a court order even though the organisation he heads was banned in 2012.

Yet the FATA and KPK suddenly had suddenly become eerily quiet just short of elections in Afghanistan. The famed and dreaded Taliban who had threatened to disrupt the elections and had indulged in violence in the run up to the elections did not carry out their threat.

It is difficult to believe that the Taliban had a sudden change of heart but it is more plausible that, as it invariably happens in the region, there have been some deals worked out or are in the making.

It is difficult to believe that the Taliban had a sudden change of heart but it is more plausible that, as it invariably happens in the region, there have been some deals worked out or are in the making. And whatever happened to the omnipotent Haqqani Networks, described by the Americans as the veritable arm of the ISI. A system which has followed a policy of creating chaos in Afghanistan, treating it alternately as its own backwater or burden, has suddenly held back its lethal weapons.

There must be some other reason other than love for democracy in Afghanistan that explains this. These deals could perhaps be between the Taliban and the Americans or between the Taliban and the Pakistan deep state or all three. It could be like this – the US wants to leave with elections having been held peacefully and a new government installed in Afghanistan, thereby declaring victory and mission accomplished. The Taliban hold back till the Americans leave and hope to reach Kabul in good time after that. This suits Pakistan as well so long as they can hope to have Kabul eventually under their control.

No wonder the Haqqani Network, Pakistan’s favourite and best armed and financed group has been held in a tight leash. The Haqqanis began their operations against Afghanistan in 1973 during Zulfiqar Ali Bhutto’s time post-1971 when Pakistan felt an urgency to control Afghanistan as a counter to India. That effort has continued unabated since then becoming more sinister and violent every passing year. It was this mindset that made Pakistan double cross its main ally the US over the last ten years and it was this mindset that gave shelter to the likes of Osama bin Laden.

Meanwhile, there is another spoke in the wheel. Mullah Omar’s son-in-law, Agha Jan Mutasim has been recently put under house-arrest in the United Arab Emirates and may be deported to Kabul. Mustasim had launched his own peace initiative in opposition to Taliban policy and was in touch with the High Peace Council. This means that Kabul had separate links with a section of the Taliban. Then there are the TTP elements, powerful bureaucrats and politicians who may want their share the crumbs of the deal.

All one can deduce from this is that nothing in the Af-Pak region is what it appears to be and all arrangements can worked out through deals.

Meanwhile, it is equally inexplicable why the Nawaz Sharif government is pursuing the Musharraf trial so diligently risking the annoyance of the Army at a time when the government would need the Army’s co-operation in tackling situations in FATA, Balochistan and Karachi.

The Musharraf trial could be an unnecessary distraction for a man determined to wreak revenge at a time when FATA threatens to spin out of control.

The Army, on the other hand, has increased the protection provided to the former army chief fearing assassination attempts and General Shareef has gone on record to publicly state that the Army would not tolerate apparent disrespect to itself.

Enter Saudi Arabia into this confusion with a friendly cash grant of US $ 1.5 billion to the cash starved Pakistan government headed by old friend Nawaz Sharif. Hounded out by the kingdom’s other friend, General Musharraf, Nawaz and his family had taken shelter in Saudi Arabia. It was the Saudis who had arranged Nawaz’s return to Pakistan in November 2007 after seven years of exile and Musharraf could not say no. Nothing in international relations is available for free. There would be a price that Nawaz will have to pay for this free gift.

The Musharraf trial could be an unnecessary distraction for a man determined to wreak revenge at a time when FATA threatens to spin out of control. Nawaz’s problem is that politically he is unable to decide whether to subdue the TTP first and then negotiate or negotiate first in the hope of winning over the TTP. Islamabad cannot really declare a ceasefire with terrorists without first attaining a position of strength and it cannot attain a position of strength without first using enough force on the ground to subdue the terrorists. Otherwise it is appeasement.

Irresolution also occurs when the state is unable to decide whether an adversary is an adversary out to destroy existing systems including the regime itself or they are simply misguided youth that need to be coddled or simply that the state feels so hopelessly out of control and fears massive retaliation that threatens its own existence unless it makes its peace with the adversary. Negotiations also imply that there is some common meeting ground on at least some of the issues. This means that when Islamabad pushes for negotiations it feels that there are common goals and purposes between it and Miram Shah and Wana.

Or maybe the Nawaz Sharif government, fearing reprisals, is too keen to oblige the Taliban on the Musharraf issue. This, as Pakistan’s political and defence analyst Hassan Askar Rizvi points out, could mean that Nawaz is running the risk of overestimating his electoral strength while dealing with the Army and the longer this problem lasts the greater the damage to civil-military relations.

One thought on “Pakistan – On a treadmill, going nowhere”