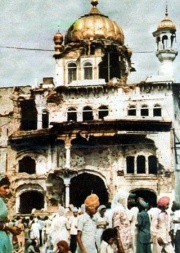 There seems to be an avoidable controversy over the British connection in the unfortunate Operation Bluestar in June 1984 that saw the Indian Army entering the sacred Golden Temple to flush out the Sikh militants. Some declassified British documents revealed on January 13 by Britain’s National Archives suggested that the then government led by Indira Gandhi sought British suggestion on how to deal with the problem resulting out of Sikh militants virtually seizing the Temple from within. The episode of the Blusestar is not only a sensitive matter in India but also in the United Kingdom, Canada and the United States where Sikhs in large numbers reside. Naturally, the latest reports over the British connection have become huge talking points. In India, the matter has assumed political overtones, with the Akali Dal and the BJP indulging in Congress-bashing and asking the UPA government to make the story clearer.

The adviser’s assessment made clear that a military operation should only be put into effect as a last resort, when all attempts at negotiation had failed.

In my considered view, the whole matter is nothing but a storm in the teacup. There is nothing new in the story. In his best-seller, “The Kaoboys of R&AW”, written by late B Raman (one of India’s finest R&AW functionaries and strategic analysts) and published by Lancer in 2007, had clearly mentioned how and why the help of the British government was solicited by Mrs. Gandhi. Rameswar Nath Kao, it may be noted, was the first chief of India’s external intelligence agency, Research and Analysis Wing(R&AW). But before discussing the Raman’s book, let me deal first with the response of the British government to this new controversy.

UK Foreign Secretary William Hague told British Parliament on February 4 that an official investigation has shown Britain did advise India on planning the controversial Operation Bluestar against Sikh separatists at the Golden Temple in Amritsar in 1984. However, Hague said Britain’s advice had limited impact. He said that following the recent reports Prime Minister David Cameron “instructed the Cabinet Secretary to carry out an urgent investigation in four critical areas: why advice was provided to the Indian authorities, what the nature of that advice was, what impact it had on Operation Blue Star, and whether Parliament was misled.”

According to Hague, the officials accordingly carried out an extensive and thorough search of the files held by all relevant Departments and Agencies from December 1983 to June1984. They went through some 200 files and over 23,000 documents but found a very limited number of documents relating to Operation Blue Star. The main findings of the British Cabinet Secretary’s report, as revealed by Hague, are as follows:

First, on why the UK provided advice to the Indian Government, the Cabinet Secretary has established that in early February 1984, the-then Government received an urgent request to provide operational advice on Indian contingency plans for action to regain control of the temple complex. The British High Commission in India recommended that the Government respond positively to the request for bilateral assistance, from a country with which we had an important relationship. This advice was accepted by the then-Government of Mrs. Margaret Thatcher.

The Cabinet Secretary found no evidence in the files or from discussion with officials involved that any other form of UK military assistance – such as equipment or training – was given to the Indian authorities.

Second, the Cabinet Secretary then examined the nature of the advice that was provided to India following that decision. He has established that a single British military adviser travelled to India between 8th and 17th February 1984 to advise the Indian Intelligence Services and Special Group on contingency plans that they were drawing up for operations against armed dissidents in the temple complex, including ground reconnaissance of the site.  The adviser’s assessment made clear that a military operation should only be put into effect as a last resort, when all attempts at negotiation had failed.  It recommended including in any operation an element of surprise and the use of helicopter-borne forces, in the interests of reducing casualties and bringing about a swift resolution.

This giving of military advice was not repeated. The documents show that the decision to provide advice was based on an explicit recommendation to Ministers that the Government should not contemplate assistance beyond the visit of the military adviser, and this was reflected in his instructions.  The Cabinet Secretary found no evidence in the files or from discussion with officials involved that any other form of UK military assistance – such as equipment or training – was given to the Indian authorities.

Third, the report examines what actual impact UK advice had on the Indian Operation, which took place between 5th and 7th June 1984, over three months later. The report establishes that during that time the planning by the Indian authorities had changed significantly. “The number of dissident forces was considerably larger by that time, and the fortifications inside the site were more extensive. The documents also record information provided by the Indian Intelligence Co-ordinator that after the UK military adviser’s visit in February, the Indian Army took over lead responsibility for the operation and the main concept behind the operation changed”.

The Cabinet Secretary’s report includes “an analysis by current military staff of the extent to which the actual operation in June 1984 differed from the approach recommended in February by the UK military adviser.  Operation Blue Star was a ground assault, without the element of surprise, and without a helicopter-borne element. The British Cabinet Secretary’s report therefore concludes that “the UK military officer’s advice had limited impact on Operation Blue Star”.

In sum, the British Cabinet Secretary’s report finds that “the nature of the UK’s assistance was purely advisory, limited and provided to the Indian government at an early stage; that it had limited impact on the tragic events that unfolded at the Temple three months later; that there was no link between the provision of this advice and defence sales; and that there is no record of the Government receiving advance notice of the operation.”

…few questions can be raised here.  First, why did Mrs. Gandhi send Kao to Britain?

This conclusion by the British Cabinet Secretary is more or less in tune with the points made by Raman in his book, though Raman’s account of the nature of British advice varies a bit. While the British Cabinet Secretary’s note suggests that the advice was to undertake as last resort helicopter-borne attack as a big surprise, on the page 96 of the book, Raman writes that “I was given to understand that at the request of Kao, two officers of the British Security Service (MI-5) visited the Golden Temple as tourists and gave a similar advice – be patient and avoid action or use the police”.  If Raman’s account is to be believed, “one had an impression that Kao felt that it would be better to be patient for some weeks instead of taking any precipitate action, which might prove counterproductive or, if immediate action was considered necessary, to use the police and the central paramilitary forces instead of the Army. The Army is trained in a manner different from the police.  Once the Army is launched into action, it has to prevail over the adversary. In the case of the police, it tunes its action to suit the circumstances. It does not have to prevail whatever be the circumstances. If it finds that the resistance of the adversary is high and that its attempts to prevail could cause high fatalities, it does not mind withdrawing and awaiting a better opportunity, when it can prevail at much less human cost”.

Raman also writes that Indira Gandhi had sent “Kao abroad to contact foreign-based Khalistani elements and seek their cooperation for making Bhindaranwale and other Khalistan elements vacate the Golden temple. Two other officers of the R&AW and I accompanied him. My job was again to record the discussions secretly, transcribe them and put up the transcripts to Kao for briefing Indira Gandhi on our return to India”.

Now few questions can be raised here.  First, why did Mrs. Gandhi send Kao to Britain? The corollary of this could be a poser as to why Kao requested the British intelligence agents to come to India.  Does this not amount to inviting a foreign country to interfere in India’s internal affairs? Finally, why did Mrs. Gandhi reject Kao’s advice not to send the Army into the Golden Temple?

I do not find these questions, which are being hyped in our television channels these days, to be difficult at all. Britain was the country whose territory was abused the most by the Khalistani extremists in the 1980s and 90s. Going by the details provided in Raman’s book of the Khalistani activities abroad, supported by the Pakistani ISI and abated by the American CIA, Jagjit Singh Chauvan, the founder of the “Khalistan”, was based in London where he established the so-called Khalistan government- in- exile and guided as well as financed the extremists in India. It was sheer common sense therefore on the part Indira Gandhi to engage with the British government of the day to bring the situation under control. As regards, Kao’s visit and his subsequent India-visits of the British intelligence officials,   it is very much a normal practice between the intelligence officials of friendly countries. They do exchange information and visits regularly. That is how notorious international criminals are apprehended and serious international crimes forestalled.

That brings the question why Mrs. Gandhi did not listen to Kao’s advice of avoiding the Army’s intervention in the Golden Temple. Well, a Prime Minister, or the government of the day, receives myriad suggestions, often conflicting, from different sources; but the final decision is that of his or her cabinet only.

The tragic Operation Bluestar will always invite conflicting interpretations. But to bring a British angle (the governmental role) into it will be of not much help. I think that the main problem was the utter inability of the then Central and Punjab governments to prevent Bhindarnwale and his supporters from amassing weapons inside the Golden Temple. But then, who was Bhindaranwale? Was he not the creation of the some of the most powerful politicians of the day?