One of the Most Intriguing Officers in the Indian Army 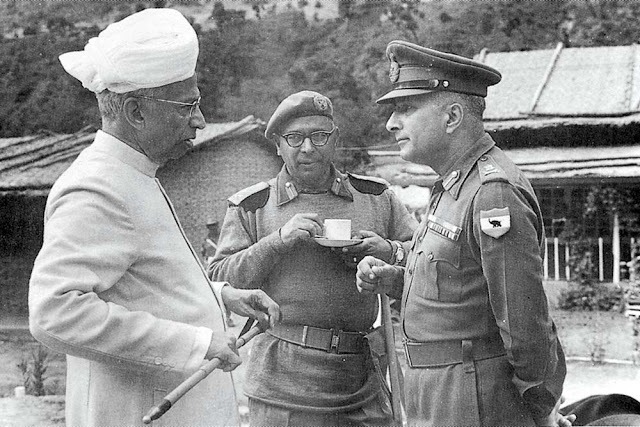 Quoting former Foreign Secretary M.K. Rasgotra, PTI reported that though the U.S. President John F. Kennedy had offered to help India detonate a nuclear device much before China did (in 1964), it was rejected by the Indian Prime Minister.

The conclusions of news agency are however doubtful, as the incident is taken out of context; PTI says: “India need not have had to make desperate efforts now to get membership of the elite Nuclear Suppliers Group (NSG) had Prime Minister Jawaharlal Nehru accepted then U.S. President John F. Kennedy’s offer of helping the country detonate a nuclear device much before China did in 1964.”

It is not that simple and many in Kennedy Administration did not agree with the President’s views.

According to PTI, Rasgotra added that if Nehru had accepted the offer, not only would have India tested the nuclear device first in Asia, before China, but India would have also “deterred China from launching its war of 1962 and even imparted a note of caution to [Pakistan’s] Field Marshal Ayub Khan’s plans for war in 1965.”

From time to time, I have mentioned some of Nehru’s blunders on this blog.

One was the rejection of a seat for India in the UN Security Council. In fact, it occurred twice.

The first time in 1950, when the State Department made the offer and a few years later, when the Soviets were ready to sponsor India for a seat.

Another blunder is the selection of some Nehru’s protégés (many Kashmiri Pandits) to run the Indian Army and the administration.

Lt Gen B.M. Kaul, who was Chief of General Staff (CGS) in the Army Headquarters, before taking the command of the 4 Corps, has been one of the main persons indicted by the Henderson-Brooks Inquiry Commission.

It is Nehru, who promoted Kaul to a position where Kaul should have never been, who was the real guilty man. His name is however not mentioned in the Henderson-Brooks report, as the terms of reference of the Commission were limited to military operations.

I recently came across an interesting document about Lt Gen B.M. Kaul.

It is a note by M.O. Mathai, Nehru’s Private Secretary typed in 1953, nine years before Kaul’s infamous appointment as Corps Commander.

In this note, (‘typed by self’) Mathai writes: “Past experience in Washington and Kashmir shows that Kaul is one of the most intriguing officers in the Indian Army. He has no good word for anyone except himself. Just as Gopi Handoo he talks far too much.”

The note was for Nehru’s eyes only.

The question is: knowing that Kaul is a schemer, why to appoint him as Corps Commander?

Here is the background of the note.

“After the Korean War prisoner exchange was an important agenda. But there was a disagreement. The UN wanted voluntary repatriation but the People’s Republic of China wanted required repatriation. By May 1952, despite several efforts the issue was deadlocked. Several plans were put forth and finally the UN agreed to Jawaharlal Nehru’s and V. K. Krishna Menon’s prisoner-of-war settlement proposal which called for a Neutral Nations’ Repatriation Commission (NNRC). The proposal was rejected by China and the Democratic People’s Republic of Korea on 3 December 1952. UN Commander General Mark Clark proposed an exchange of sick and wounded soldiers which was agreed to by the Communists. Thus, Operation Little Switch went underway. This was the first exchange of soldiers which began that year on April 20.

…On 27 July 1953, two neutral nation commissions were formed to implement and supervise the cease-fire, the other being the Neutral Nations Supervisory Commission (NNSC), as part of the truce. The UN had selected Sweden and Switzerland which were neutral and were initial members which had signed the UN Charter. But the Chinese Communist Forces (CCF, the Cold War term for the People’s Republic of China) chose the People’s Republics of Poland and of Czechoslovakia which were Communist countries and members of the UN charter as well. China also wanted USSR involved but the UN rejected the proposal. The NNRC also arrived in Korea on 27 July 1953. It was under the chairmanship of the Indian Army Major General K S Thimayya. Along with the above four countries, which were made members of the NNSC, India chaired the NNRC and supported the POWs. POWs refusing to return to their homeland were placed under the NNRC for 120 days. Subsequently the second and larger exchange of POWs took place. This was called Operation Big Switch. Most of the POWs had been repatriated by September 1953. In February 1954, the NNRC was dissolved. But CCF released a few of the UN POWs only by August 1955.”

Kashimri Pandits were obviously not very popular with Mathai

During the past two weeks or so there have been persistent rumours afloat in the Defence Ministry and the External Affairs Ministry that Brigadier B.M. Kaul and P.N. Haksar have been writing to you regularly accusing General Thimayya and others in the NNRC and Indian Custodian Force in Korea of being anti-China and the like. I am not concerned about the truth or otherwise of their writing. If they have been writing, I wonder how this gets talked about. Perhaps the fellows who write have been bragging about it. However it is their business.

While I have no detailed information about the behavior of our people in Korea, it is obvious that their decisions have been in conformity with the provisions of the terms of reference they are obliged to function under.

My talks with Chakravarti indicated that Brigadier Kaul and [S.N.] Haksar (the latter to some extent only) were in favour of the Indian Custodian Force to indulge in mass shooting of prisoners. This would have been disastrous and would have ultimately brought India’s name to mud. In any event on all these important matters detailed instructions were sent from here by PM.

In this connection it is good to recall what Chou-en-Lai said publicly in December 1952. The quotation given below is from a telegram dated 14th December 1952 from Chou-en-Lai to Lester Pierson (President of UN) [later Prime Minister of Canada] about the Indian Resolution on Korea which he termed as an Indian version of the American Resolution. Here it is:

“In a situation where prisoners of war are under the jurisdiction of the Repatriation Commission, it will be absolutely impossible to separate or isolate these agents from the Korean and Chinese prisoners of war”.

Chou-En-Lai foresaw the difficulties and said a realistic thing which now provides us with the answer to criticisms. I enclose a fuller extract from Chou-En-Lai’s telegram. Kaul and Haksar cannot aspire to be more Chinese than Chou-En-Lai.

Past experience in Washington and Kashmir shows that Kaul is one of the most intriguing officers in the Indian Army. He has no good word for anyone except himself. Just as Gopi Handoo [from the Intelligence Bureau, another Kashmiri Pandit] he talks far too much.