Nothing new in Dragon’s ‘Wolf Warrior’ diplomacy; it actually started when India was ‘nice’ to China 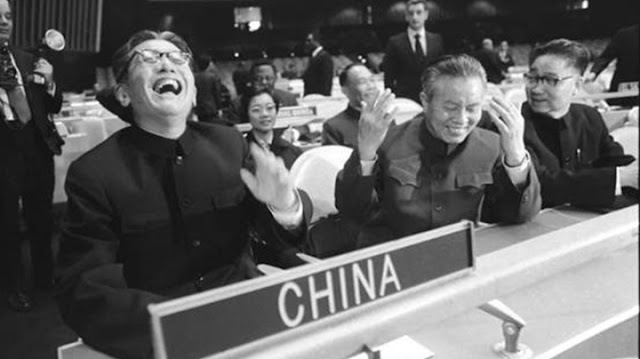 India has to fight her own battles alone, and should not expect any ‘friend’ to come to her rescue, especially when facing China

Nothing new in Dragon’s ‘Wolf Warrior’ diplomacy; it actually started when India was ‘nice’ to China

In a couple of months, India will celebrate the 50th anniversary of the liberation of Bangladesh from the tyranny of the Pakistani generals. It is perhaps an occasion to take a look back at some of the events which marked those momentous months of 1971. It is interesting to look at the attitude of China, which at that time had just been admitted to the United Nations.

But let us first go back to October 1949. Soon after Mao Zedong declared from the rostrum of Tiananmen Square that ‘China has risen’, the then Indian prime minister, Jawaharlal Nehru, decided to recognise the Communist regime in Beijing. Sardar Vallabhbhai Patel could not understand the hurry. On 6 December 1949, he wrote to Nehru: “It seems your intention is to recognise China soon after the UN session ends, even if it means that others are not ready by then or prepared to do so. My own feeling is that we do not stand to gain anything by giving a lead.”

Nehru immediately replied: “Our advisors [read VK Krishna Menon] are of the opinion that it would be definitely harmful to recognise… after the Commonwealth have done so. It would mean that we have no policy of our own, but follow the dictates of other countries.”

Nehru won the battle. On 31 December 1949, India was the first nation, with Burma, to recognise the Communist regime.

A few months later, the US State Department offered to sponsor India for a seat in the Security Council; Nehru refused.

On 30 August 1950, he wrote to his sister, Vijaya Lakshmi Pandit, then the Indian Ambassador in the United States: “You mention that the State Department is trying to unseat China as a Permanent Member of the Security Council and to put India in her place. So far as we are concerned, we are not going to countenance it. That would be bad from every point of view. It would be a clear affront to China and it would mean some kind of a break between us and China.”

Again in 1955, when the Soviet Union offered to sponsor India’s case for a permanent seat, Delhi refused. In his three-volume biography of Nehru, Sarvepalli Gopal wrote: “He [Nehru] rejected the Soviet offer to propose India as the sixth permanent member of the Security Council and insisted that priority be given to China’s admission to the United Nations.”

For China, the great day finally arrived at the end of 1971, when the People’s Republic of China took the seat occupied by Formosa (Taiwan) and made a formal entry into the UN.

Had China by then become a ‘normal’ state? No, though the Cultural Revolution had just ended, the power struggle continued. In September 1971, Lin Biao, defence minister and heir-apparent of Mao, died in a mysterious aircraft crash while he was fleeing to Mongolia. Officially, he was preparing a coup against Mao.

But nine years after the 1962 war with China, India probably thought that it could engage with China; Delhi was happy that Beijing was finally admitted to the Security Council.

On 27 October 1971, prime minister Indira Gandhi wrote to her Chinese counterpart, Zhou Enlai, conveying: “[India’s] felicitations on the restoration of the legitimate right of representation of China by your government in the United Nations. This will make the United Nations more representative in character and will give greater weight to Asia’s participation in the deliberations for any decisions of this organisation.”

It was six weeks before the Bangladesh war began. On 15 November 1971, in a speech to the world body, the Indian Permanent Representative to the UN, Samar Sen, spoke of a “perverse mistake” to not have admitted China earlier. At the time, Delhi thought that Beijing would appreciate its gesture.

But hardly three weeks later, Huang Hua, China’s representative in the UN Security Council, made a scathing attack against India: “The Indian government has openly sent troops to invade East Pakistan… The question of East Pakistan is purely the internal affair of Pakistan, in which no one has any right to interfere.” He proceeded to say: “The Indian government asserts that it has sent troops to East Pakistan for the purpose of ‘self-defence’. This is sheer gangster logic. The facts show that it is India which has committed aggression against Pakistan, and not Pakistan which has ‘menaced’ the security of India.”

What about the 10 million Bangladeshi refugees? Was this also India’s fault?

The next day, on 5 December 1971, Huang Hua presented a draft resolution to the Security Council for consideration; Beijing asked for an immediate ceasefire and the withdrawal of the Indian troops from Bangladesh (East Pakistan for China).

Two days later, Chiao Kuan-hua, another Chinese representative at the UN, made another statement pointing out that the Indian government was an outright aggressor. He linked the issue with the presence of the Dalai Lama and several of his countrymen being refugees in India, saying that “this is indeed absurd to the extreme”, that Delhi had no alternative but to send troops to Bangladesh. Was China apprehensive that one day India could try to liberate Tibet?

Speaking of the Tibetan refugees, China said: “The Indian ruling circles had also some time ago forcibly coerced several tens of thousands of the inhabitants of China’s Tibet into going to India and set up a so-called government in exile headed by the Chinese traitor—Dalai Lama. To agree that the Indian government is justified to use the so-called refugee question as a pretext for invading Pakistan is tantamount to agreeing that the Indian government will be justified to use the question of the so-called ‘Tibetan refugees’ as a pretext for invading China.” He told the UN General Assembly that it was “utterly ridiculous”.

In the meantime, the duo Richard Nixon-Henry Kissinger was trying to convince Mao and Zhou to intervene and send troops into the Chumbi Valley to attack India.

Pakistan’s General Niazi was told to hold out for help from “Yellows from the North and Whites from the South”—the Chinese and the Americans. The aircraft carrier Enterprise was indeed on the way; but the ‘yellows’ never came.

Kissinger had planned a scheme to intimidate Indira Gandhi: “The United States would illegally allow Iran and Jordan to send squadrons of US aircraft to Pakistan, [then] secretly ask China to mass its troops on the Indian border, and [we will] deploy a US aircraft carrier group to the Bay of Bengal to threaten India. Urging Nixon to stun India with all three moves simultaneously, Kissinger observed: “I’m sure all hell will break loose here.”

All that to show that, like in the past, India has to fight her own battles alone, and should not expect any ‘friend’ to come to her rescue, especially when facing China.

And when ‘experts’ speak about a new phenomenon, i.e. the appearance of the ‘Wolf’s Warriors’ (the ‘barking’ Chinese diplomats), they should read history. It started long ago, even when India was ‘nice’ to China; ‘niceties’ have never influenced the Communist regime.

One thought on “Nothing new in Dragon’s ‘Wolf Warrior’ diplomacy; it actually started when India was ‘nice’ to China”