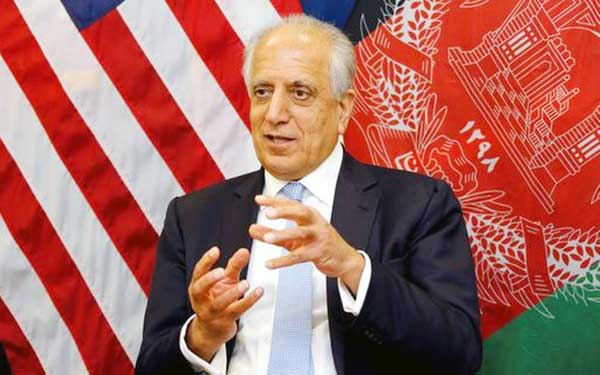 In a recent interview on May 7, Zalmay Khalizad, US Special Representative for Afghanistan’s Reconciliation, told the local media that India should talk directly with the Taliban, adding that he had discussed how India could play a more active role in the Afghan reconciliation process during his talks with Indian government in Delhi. Does more active role imply direct talks with Taliban? Apparently he is reported to have said that “India is an important force in Afghanistan and it would be appropriate for that (India-Taliban) engagement to take place”.

Khalizad also said that India had a significant role in Afghanistan’s development but paradoxically doesn’t play a role in the international peace efforts, and that for success of the reconciliation process of Afghanistan, support from Pakistan, India and the international community is very important.

Replying to a question he said Pakistan supports the peace process (read Pakistan is the goody-goody boy) and America’s strong position is that there should not be terror sanctuaries on either side of the Afghan-Pakistan border. But terror sanctuaries are thriving inside Pakistan as pointed out by successive US Presidents. Besides, Taliban commanders acknowledge in BBC documentary ‘Secret Pakistan’ that Pakistan is running training camps to support and arm Taliban in Afghanistan?

Khalizad believed himself the messiah for Afghanistan who would broker the greatest peace deal of the century. However, he went horribly wrong in the mechanics of working out the deal. The paramount aim being exit of US troops from Afghanistan, the Government of Afghanistan was not considered essential in the negotiations, and hence left completely out. Wasn’t their inclusion possible with the quantum of Pakistani support to Taliban?

The prolonged rounds of talks at Doha failed to ‘buy’ the Taliban because these negotiations were done when the Taliban were on the ascent. So Taliban were probably asked for the draft deal that it got vetted by Pakistan, the nuance of ‘reduced violence for few days’ was added and bingo Khalizad’s deal was ready. It did not matter how unfair it was for Afghanistan’s Government including the lopsided prisoner swap of 5,000 Taliban fighters versus 1,000 Afghan security forces personnel.

But then things started getting rough. For the Afghan Government, releasing 5000 Taliban prisoners in one go (Taliban wanted top 14 commanders notorious for vicious attacks released) meant exponential increase in terror attacks. Afghan Government’s offer to swap 1500 prisoners from both sides was rejected by Taliban. So Afghan’s decided to release 100 Taliban fighters in exchange to 20 of their own security personnel. Taliban called off talks with the Afghan Government.

Taliban continues terror attacks though the attack on the Kabul Gurdwara was engineered by Pakistan through the ISKP. Presently Afghanistan is in the middle of combating the China Virus. As of May 10, there were 4,402 confirmed cases, 558 recoveries and 120 virus-related deaths in Afghanistan but that may not be the real picture due to lack of testing and equipment. The annual crude death rate in Afghanistan being 13.2 percent, how many died of China Virus may never be known.

Does Zalmay Khalizad saying that India doesn’t play a role in the international peace efforts towards Afghan reconciliation and that India should talk directly with Taliban signify his frustration? Is it because Taliban have called off talks with the Afghan Government and Khalizad’s time-table for US troops existing Afghanistan is disrupted? Why had the US not thought of including India in the talks on Afghan reconciliation right from the Quadrilateral Coordination Group (QCG) of Afghanistan, and beyond?

This despite India pumping in over $2 billion for the assistance in construction of essential infrastructure in Afghanistan while Chinese investments aim to only include Afghanistan in its BRI and to draw economic benefits for itself by developing copper mines and commercial oil which it is drilling since 2012.

Is all this and China setting up a brigade-sized infrastructure for Afghan Army in US national interests? To balance the China-Pakistan bias in Afghan reconciliation talks, not only India but Central Asian Republics (CAR) bordering Afghanistan should have been included as stakeholders as well.

Past decades CAR countries have been more than convinced that instability in Afghanistan is triggered by Pakistan. They wanted a force along the Afghan-Pakistan border to block terrorism and all militant support from Pakistan. A force under the UN is not feasible but the US never gave thought to the Robert Blackwill Plan for establishing Pashtunistan, not by partitioning Afghanistan as Blackwill suggested but by partitioning Pakistan and include small border area of Afghanistan.

The Pashtun Tahafuz Movement in Pakistan should have been armed to defend their independence. After all the Taliban too are Pashtuns and have been fighting for years. But America’s own policy towards Afghanistan has been mostly erratic, the US-Taliban deal itself being one example, and plans like a modified Blackwill Plan can hardly be affected overnight.

There is a line of thought that Taliban are re-evaluating their ties with Pakistan and post the US exit may not like to retain the same level of ties with the ISI because of extremism. This must be taken with a pinch of salt because of Taliban’s intimate links from the time Pakistan established and armed the Mujahideen (predecessors of Taliban) to oust the Soviets from Afghanistan. In addition will be pressure on Taliban by Pakistan and China to reduce Indian influence in Afghanistan.

Ironically India failed to establish its sub-conventional muscle in Afghanistan (as Pakistan successfully has) despite encouragement by the Afghans and even positive signals by Taliban. Whether Taliban will spare Indian projects from being attacked post US exit is questionable but Pakistan will continue to attack Indian interests through its proxies including the ISKP. Pakistan-Taliban hardcore Islamist links and China’s inclusion of Afghanistan in its BRI post US exit are also factors that may inhibit Taliban accommodating India.

Since 2016, India succeeded Pakistan as the top destination for Afghan medical tourists and thousands of Afghans travel to India every month in search of medical treatment. There are some 12,000 Afghan refugees in India, most of which are Hindus and Sikhs, but not all. Government has allowed the UNHCR in India to operate a program for them. But most importantly, overt Taliban leaders in the High Peace Council at Kabul since its establishment in September 2010 have been saying they have many friends in India.

oth Hamid Karzai and Ashraf Ghani, former and incumbent Presidents of Afghanistan are Pashtuns – same as Taliban. However, Agha H Amin, former Pakistan army officer, prophesied years back that once US troops exit Afghanistan, Russians, Iranians and Indians will have no choice but to support Northern Alliance against Pakistan sponsored Taliban who regard all Shias, Ismailis, non-Pashtuns, moderate Pashtuns as infidels who deserve to be massacred. Yet in recent years, Russia and Iran have established links with the Taliban, while India sat on the fence.

In a recent webinar hosted by the Global Counter Terrorism Council (GCTC), Mohammad Shaheen, Taliban spokesperson stated that Taliban will never want any foreign organization using Afghan soil to target another country and will bring a law to stop such activity. He also said Taliban would be more than willing to engage with neighbouring countries on the basis of mutual respect and mutual interests. How this plays out eventually after US exit only time will tell. It is also uncertain how Taliban majority representation in future Afghan Government will behave towards the minorities.

The belief that Taliban have shed their dream of an Islamic Emirate should be seen in backdrop of the Taliban statement issued on March 7, 2020, that read, “As this 19-year jihad against the (foreign) occupation was waged under the command of the legal Emir (Taliban chief Mullah Haibatullah Akhundzada), the termination of occupation agreement does not mean that his rule is absolved”.

The recent twin barbaric terror attacks in Afghanistan killed 36 and injured scores. This included the brutal attack on the maternity ward of a hospital run by Doctors Without Borders killing 15 and wounding 45 including mothers, babies and nurses, following which President Ashraf Ghani has ordered offensive operations against Taliban and other terrorist groups.

Therefore, any talks between Taliban and the Afghan Government are not likely anytime soon. However, with US intent on exiting Afghanistan, domination of Taliban in Afghanistan whether in a democratic government or emirate appears certain.

The question therefore is whether India will wait for the US to exit Afghanistan and take a reactive decision after the residual situation precipitates?. Prudence would demand that India opens communication channels with the Taliban and erstwhile Northern Alliance partners in addition to the Government of Afghanistan.