'Yellow Vest Movement' of France: Is this a new “French Spring”? 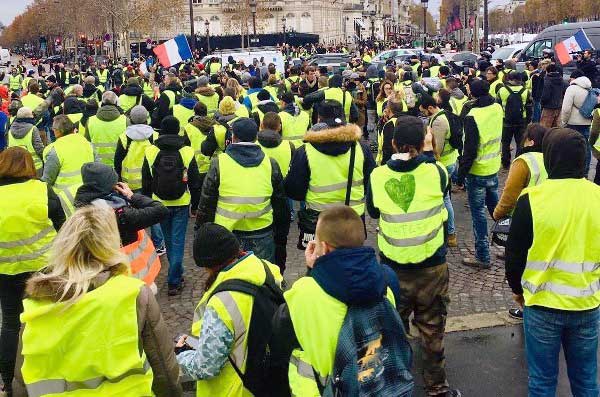 The Yellow Vest (gilets jaune) Movement, named after the high-visibility jackets the protesters wear, has drawn world attention to France’s toughest problems: high unemployment and a stagnant economy. This is a Movement that represents a simmering discontent between those super rich and middle and lower middle class in France. Most of those joining the ranks of the “yellow vests” are workers from lower middle incomes struggling to survive getting little public services in exchange for some of the highest tax payments in Europe.

The Yellow Vests Movement has been described as a Movement for economic justice. Many of the protesters are from deprived section and live under severe financial constraints mostly in rural or outer-urban areas where there is weak economic growth and high rate of unemployment, and where depending on a car for transport is essential but has become increasingly costly.

The Movement depicts a general dissatisfaction at the way life has changed for the worse in these post modern societies and the anger is fallen on the incumbent President Macron.

The Yellow Vest Movement started on November 17, 2018 as a result of a social media campaign with supporters donning the fluorescent safety vests that French law requires all motorists to carry. Initially it was a protest against the fuel price but later included a series of demands including the removal of French President Macron for his perceived bias in favour of the elite and well-off city dwellers and also calling for the right to recall. They are angry over the prices at the pump, with the cost of diesel increasing by about 20 percent in the past year to an average of €1.49 per litre.

Nearly 3, 00,000 people protested on the streets across the country that day. The protests hit the economy, trade, hotels, shops and restaurants during the Christmas time.

The Movement is leaderless, horizontal, without any structure and completely directionless. Informal leaders are visible but not accepted by the Movement in general. This Yellow Jacket Movement is not associated with a specific political party or trade union and has spread largely by social media. Though some would like to draw an ideological parity with the Social Democratic party of France. Social-conservative leaders are making a case that their demands overlap with those of the Yellow Vest Movement, essentially trying to co-opt the movement’s platform to protest against abortion, the use of assisted reproductive technology and same-sex marriage.

France had legalized abortion in 1975 and gay marriage in 2013. Now the Catholic social conservatives are confronting these laws and had mobilized public opinion over the years in favour of a more traditional view of marriage are now finding the echo of their demands in this Yellow Vest Movement. The Social conservatives joined the ranks with the Yellow Vest Movement claiming that they have been left out of the democratic process. That’s because Macron’s government has repeatedly stated that it will not discuss abortion and same-sex marriage rights.

The French government is planning to change the bio ethics law in order to offer reproductive technology to lesbian couples and single women, and allow egg freezing for fertility purposes. Social conservatives have seized this opportunity created by the Yellow Vests to lobby against those changes.

This is a New France. This young generation does not like the European Union, same-sex marriage, and mass immigration and might even ask for a referendum on the question of their remaining in European Union a la British style.

There is a saying that the “French elect a political leader, turn them into a monarch, and then chop off their head”. President Macron has been labelled “the president of the rich” for enacting tax cuts that mainly benefited high income households. He has removed the Wealth Tax from the 1% super rich of France. President Macron was of the view was that his tax reform would combine with changing labour laws to increase economic activity and reduce France’s high unemployment rate. France has a close to 10 % unemployment despite the global economic expansion. All this has severely affected Macron’s approval rating that hangs around 28% as against 65% at the time of his election a year and half back.

The economic growth in France has been retarded over the past decade. There is an urgent need to increase growth rate that could make a difference in the ability to balance the budget and provide income security for weaker section of populations. He did appear on couple of televised address to the nation and has agreed to look into some of the issues while acting tough on the rioters.

Signs of self destruction of the movement

The Yellow Vest Movement raised genuine grievances about the unjust treatment of people on the regional and social periphery. They could go on to become a patent force to the French democracy. They have forced the government not to increase the taxes further as planned earlier and also made the government realise the people’s discontent. The French Government is now coming with a package of €10 bn to invest in social sector including rise in wages and other reliefs to weaker section.

But outright insult of the entire political leadership by the Yellow Vests or threat of violence has marred its further rise. The Movement’ rejects main stream media and as a result making itself vulnerable to conspiracy and lies weaved by the ultra right and the ultra left. The strength of the Movement was its rejection of leaders and top-down structures and capacity to spread through social media. Both are now becoming its weakness and reasons for its downfall. The leaderless Movement is exploited by a militant minority of “yellow vests” wrecking havoc on roads, market and causing huge loss to the State.

During the protests, shops were looted in the French capital, their windows smashed, cars torched and barricades burned in the streets. The Bank of France estimates losses to the economy at €4.4 billion, though some analysts feel it is much more than this. They are also seen as Anti-Semitic and hard right “entryism” was obvious from the beginning. The attacks on Jews and denial of holocaust are one of the examples. They have also discredited themselves in racism, violence and ridiculous conspiracy theories.

This Movement needs leaders because it is hijacked by the ideologically driven thugs in Yellow Vests. There has to be a negotiation and someone authorised to negotiate, otherwise apart from causing unrest, it would not gain anything and the French government will be too happy to dismiss and crush them as extremists and anti democratic.

One thought on “‘Yellow Vest Movement’ of France: Is this a new “French Spring”?”