Home  >  News  > Geopolitics  >  Xi Jinping will lead China for record third time, but is much weaker than we think

Xi Jinping will lead China for record third time, but is much weaker than we think 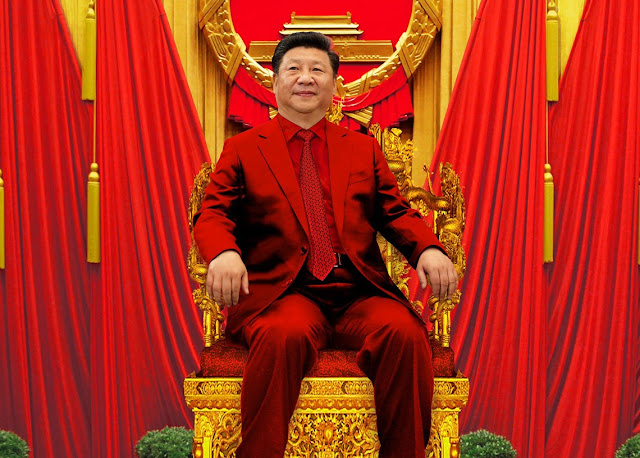 The 20th National Congress of the Chinese Communist Party (CCP) will be held in Beijing in November this year. About 2,300 delegates, representing an estimated 90 million members, will meet in the Great Hall of the People in Beijing and decide the fate of China for the next five years at least.

The CCP Congress will also elect a new Central Committee, which in turn will approve the members of the Political Bureau and its Standing Committee — in other words, the bosses of the Middle Kingdom for five years.

Xi Jinping should be re-elected as the CCP’s Secretary-General, the highest position, for an unprecedented third term. The main reason why Xi will continue is that there are not many candidates for the hot seat with China showing serious signs of crumbling. Let me explain.

How the world sees China?

Today, the situation in the world (and China in particular) is not the same as two or three years ago. Certain events have changed, perhaps forever, the perception that the world has of China. It started with the virus which in all probability originated from the P4 lab of the Institute of Virology in Wuhan. With the tacit support of the WHO, Xi’s administration was able to cover up the facts; it even got the support of the Americans and the French, who had heavily invested in the lab (it was inaugurated by a French prime minister in February 2017).

It remains a fact that the pandemic has shaken the planet. For a long time, China seemed to be ‘exempted’ from the throes of the virus, as the US, Europe or India suffered a great deal and lost millions of their citizens. But now the virus is coming back to the Middle Kingdom with a vengeance, particularly Shanghai, China’s economic hub, which has been paralysed under a strict lockdown policy for the last few weeks.

Today, Xi Jinping’s zero-Covid policy has put his reign at risk. Nina Xiang, the award-winning journalist, warns in The Nikkei: “Pandemic containment is increasingly shaping up as Cultural Revolution 2.0.” She observes: “Recent rhetoric on Chinese state media that the current Covid policy is a clash of political systems and civilisations.”

Xiang adds: “The conditions now in locked-down Shanghai have created the launching pad for what could morph into China’s Cultural Revolution 2.0, in which Xi Jinping’s third presidential term and the validity of his entire reign are at stake. …Having declared victory earlier in the pandemic that China’s superior systems saved lives and the economy, Xi cannot back down at this critical period before the 20th National Congress …in Beijing’s view, (it) is a small sacrifice to maintain the Party’s invincibility.”

But is the Party invincible?

The pandemic had (and continues to have) incalculable economic implications, particularly since the recent recrudescence.

The article continues: “So, Xi is going back to the old formula — a major splurge on infrastructure that ramps up growth numbers, attracts foreign investments and boosts the business sentiment in China. Xi will spend $2.3 trillion on thousands of ‘major projects,’ according to a Bloomberg analysis. This is more than double the spending of $1.1 trillion announced by the US Congress last year. However, Xi’s gamble could end up debt-trapping the Chinese economy.”

This is bound to happen, and unemployment will grow larger, with more unrest everywhere.

It is said that the housing construction sector contributes something like 35-40 per cent of Chinese GDP.

It has started crashing, with no revival in sight, as Beijing’s government does not want to jump to the rescue of companies such as Evergrande; it practically means that the savings of millions of people may be wiped out. Consequently, the purchasing power of these people will be greatly reduced.

What option is left to the government to avoid a crash? Can Xi stop the haemorrhage?

Chen Yixin, the secretary-general of the Central Political and Legal Affairs Commission and a protégé of Xi Jinping, has recently ordered a new round of inspections to remove potential risks ahead of the Congress. According to The South China Morning Post, Chen Yixin said: “[We] must consistently innovate with our political and legal work to welcome the victorious hosting of the 20th party congress.”

The Commission headed by Chen oversees all of China’s police force, prosecutors, judges and its state security personnel. Quoting from a report, the Hong Kong newspaper said “Chen ordered 10 topics for research to identify and remove likely social and political risks, including legal issues related to foreign entities, smart management and the internet.”

And then came Putin’s War in Ukraine

On 4 February, Xi Jinping and President Vladimir Putin signed a joint statement which spoke of a ‘no limits’ partnership between China and Russia; but that was before Putin sent his troops into Ukraine. Since then, Beijing, through the declarations of its Foreign Minister Wang Yi, started to see ‘limits’ to its friendship with Moscow.

On 18 March, US President Joe Biden had a video call with Chinese President Xi Jinping for nearly two hours. Biden warned Xi of the consequences China would face should Beijing provide any material support to Russia, and Xi described the Ukraine crisis as “not something we want to see.”

According to Chinese state media, Xi said that countries should not meet on the battlefield, and peace and security should be of the utmost importance to the international community. It sounds like pure rhetoric.

More importantly, perhaps, are the military lessons of the Russian campaign in Ukraine. The Central Military Commission (and its Chairman Xi Jinping) will probably have to reconsider all the plans for an invasion of Taiwan. The poor show of the Russian Army and the difficulty of swiftly winning the war, have implications for China.

Despite the massive propaganda, the Communist plans to ‘liberate’ Taiwan will have to be postponed for years. An article in The Nikkei gave the example of the sinking of the Moskva, Russia’s flagship, in the Black Sea: “[it] was the first such loss of a Russian fleet flagship during war since the Knyaz Suvorov. Since World War II, there has only been one similar incident. The ARA General Belgrano, an Argentine navy cruiser, sank during the 1982 Falklands War between Argentina and the U.K.” The sinking of the ship has tremendous consequences for the Chinese PLA Navy.

Although not admitted by Russia, the Moskva appears to have sunk after being hit by two Ukrainian Neptune anti-ship missiles. Quoting a Chinese source, The Nikkei said: “If that is true, it means that China’s much-vaunted naval power is nothing but a paper tiger.”

Why? The Chinese had bought the old aircraft carrier Varyag, which was built at the Black Sea Shipyard in Mykolaiv, south Ukraine (the Moskva was also built at a same shipyard): “The Ukrainians stripped the Varyag of various pieces of equipment and sold it as scrap to a dummy company linked to the Chinese military,” the newspaper explains.

The implications are clear: “If the armour of the Varyag is based on former Soviet standards, the sinking of the Moskva will only make Chinese leaders fret over its vulnerability to incoming advanced missiles.”

Another article in the Japanese newspaper states: “As Russia’s invasion of Ukraine drags on, China has begun to re-evaluate its own scenarios for a potential strike against Taiwan and the difficulty of taking a major metropolitan area like Taipei. With a swift, decisive victory looking unlikely, Beijing is expected to explore alternatives like expanding its nuclear arsenal as a way to hold off U.S. military involvement in any clash in the Taiwan Strait.”

Such examples could be multiplied.

For India, the shock had come in May 2020, when the PLA grabbed Indian territory in eastern Ladakh (‘Fingers’ in Pangong tso area, Gogra, Hot Springs, Galwan or Depsang). Even after 15 rounds of talks between the Indian and Chinese local military commanders, only partial Chinese withdrawal has taken place. After the Ladakh confrontation, India certainly understands China better today and its policies are more guarded, especially after Xi Jinping’s propaganda keeps hammering that it is India who attacked China.

Today, many observers conclude that if Xi Jinping wants to survive, it may result in increased military belligerence, which could, in turn, result in an armed conflict which will only aggravate the financial situation, even if it keeps the ‘masses’ temporarily mobilised behind the Party and its new Great Helmsman.

Though Xi’s policies have started being questioned within China, it does not mean that he will not be given a third term. It, however, is certainly a weakened Xi who will rule China after November. A collective leadership may take the place of the present imperial rule.