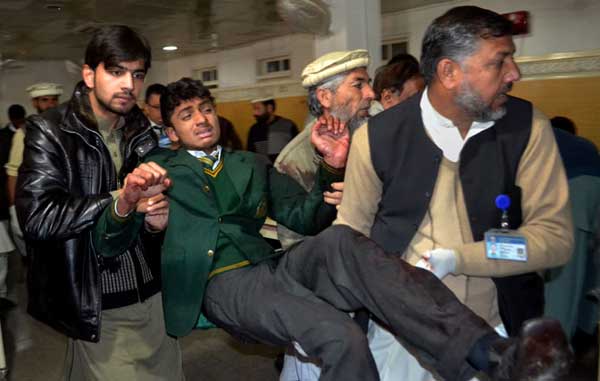 On Friday 18th September 2015, militants attacked a Pakistan Air Force base in Peshawar. In the ensuing battle, 13 militants were killed along with the 29 victims of the attack, many of whom were members of the Pakistani Air Force.[i]Attributed to the Tehreek-e-Taliban (TTP), the attack represented the latest in a series of daring assaults on Pakistani military installations by militant groups operating either independently or under the broader ideological umbrella of the TTP.

In 2007-08, the situation was potentially far worse with the TTP being formed out of an alliance of about 40 groups under the leadership of Baitullah Mehsud and threatened to overwhelm Pakistan itself.[ii]Since then, losing its first leader to a drone strike in August 2009, the TTP has fragmented into at least three factions – the TTP, the Tehrik-i-Taliban Punjab (which has seemingly allied with the Pakistani state) and theJama’at-ut-Ahrar which had pledged support for Islamic State but indicated in March 2015 that it was rejoining the TTP.[iii]It should be noted that armed conflict has occurred with Central Asian militant groups such as the East Turkestan Islamic Movement and the Islamic Movement of Uzbekistan which joined the Islamic State (IS) movement along with the Jundallah, the Tehreek-e-Khliafat and the Jamaat-al-Ahrar. Fighters from outside Pakistan have aided the TTP and its affiliates on occasion.

While it may be possible to debate whether or not attacks are at the same intensity that they were in 2007-2008 or to debate the efficacy of TTP attacks and their ability to challenge the Pakistani armed forces, what is  beyond debate is that terrorist attacks continue and the TTP and its affiliates and allies have continued to engage the Pakistani armed forces in a bruising series of low-level attacks.

Given the traditionally close relationship between the Pakistani armed forces and jihadist groups, their campaign of targeting the armed forces is seemingly inexplicable but closer examination will show that there has been a growing feeling of betrayal and antagonism on the part of these groups against the Pakistani military and a closer ideological alliance between these groups and the broader global jihadist movement. Indeed, recent IS linkage to some of the groups fighting in Pakistan gives credence to this.

…these groups and the various sectarian groups promoting conflict between Shia and Sunni Muslims do not appear to have made the Pakistani armed forces primary targets for their efforts.

In from 2004 to the present date Pakistan has suffered horrendous casualties due to terrorist attacks with over 6,000 security personnel (with over 8500 wounded) and 20,000 civilians being killed.[iv]While there are claims to have killed 32,000 militants, verification of these numbers is difficult. Furthermore, over 3 million civilians have been internally displaced.[v] Note must be taken of the casualties suffered by the Pakistani security forces as well as the fact that terror attacks on their bases have targeted relatives of military personnel. These casualties are indicative of the effort and the determination that Pakistan has shown in its campaign against these militant group as well as being indicative of the tenacity of the said groups.

Pakistan’s military establishment and intelligence agencies have long supported militant/terrorist groups such as the Laskar-e-Taiba and the Jaish-e-Mohammed as instruments of state policy against India. However, these groups and the various sectarian groups promoting conflict between Shia and Sunni Muslims do not appear to have made the Pakistani armed forces primary targets for their efforts. Indeed, even the Balochistan liberation movement, which although conducting attacks of Pakistani military bases at Samugli and Khalid airbases in Quetta, has not conducted sustained attacks against the Pakistani armed forces nor engaged them in full scale combat.[vi] That honour goes to the TTP groups and affiliates in FATA.

For the purposes of this article, which focuses on those groups based in the FATA, particular notice should be taken of the very high casualties suffered by the security forces. These are astonishingly high numbers considering the disparity in forces and firepower that the militant groups face. Indeed, in the fighting against these militant group, the Pakistani armed forces have deployed every class of conventional weapon in their arsenal, with the use of artillery, armour and air power being widespread. In addition, the employment of US and Pakistani drones, some armed, have added to the vast array of weaponry deployed against the militants.

In examining the reasons that militant groups have for the targeting of the Pakistani armed forces, the following factors, in no order of priority inevitably come into focus. None are mutually exclusive but combined they have contributed to:

Despite inflicting thousands of casualties on the militants and displacing millions of civilians, the Pakistani military continues to bleed from attacks against its installations and personnel.

The armed conflict between the Pakistani armed forces and these Taliban affiliated groups can be said to have begun in 2004 during the search for Taliban fighters by the Pakistani military in the FATA.[vii] The Pakistani central government’s control of these areas has never been particularly thorough and traditionally, these areas have been a safe-haven for groups operating across the border in Afghanistan.

Under increasing US pressure to act against these groups, who were attacking US targets in Afghanistan, the Pakistani armed forces initiated a series of military campaigns in FATA, especially in the Waziristan region. However, it was between 3-11 July 2007, when the Lal Masjid in Islamabad, with its congregation of pro-Taliban elements was besieged and stormed by Pakistani Police and Rangers that the conflict escalated with a fragile truce between the Pakistani government and the militants breaking down.[viii]This marked a beginning of a re-escalation in tensions and the resumption of a pattern of strike and counter-strike between the Pakistani military and the various militant groups operating ostensibly under the umbrella of the TTP and other militant groups.

Despite inflicting thousands of casualties on the militants and displacing millions of civilians, the Pakistani military continues to bleed from attacks against its installations and personnel. The militants, however, seem to have switched tactics and now instead of staging assaults on major military bases and open engagements with large detachments of Pakistani troops – as was the norm in 2007-2008 – they have resorted to attacking softer targets and more lightly defended compounds. The attack on the Peshawar air base it would be noted, targeted a mosque where unarmed airmen were at prayer.