Women Join the Fighter Stream of the IAF: Will It Work? 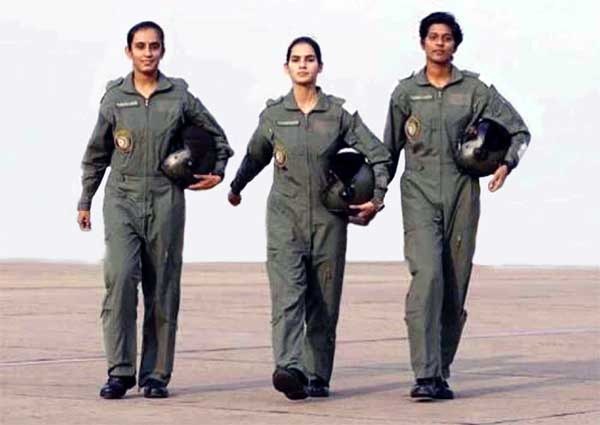 History shows that change often triggers misgivings, grumbling and active resistance, especially if the old order is threatened. But within a short time, most people adjust. This happened when women officers first joined the IAF and again when they were permitted to serve as transport and helicopter pilots. Therefore, it is unlikely that the induction of women as fighter pilots in the IAF will be as dramatic (or traumatic) as some might imagine.

Across the world there is an increasing focus on women in the military. Although in most cases they are barred from combat, this is gradually changing.

June 18, 2016, was a historic day for the Indian Air Force (IAF) and indeed for the entire Indian military establishment. On that day, three young women pilots were commissioned as Flying Officers and received their coveted wings from Union Minister for Defence, Manohar Parrikar, a crucial step towards joining the fighter stream of the IAF.

It was at an Air Force Day gathering on October 08, 2015, that Air Chief Marshal Arup Raha, Chief of the Air Staff (CAS), made this rather low-key announcement, “We have women pilots flying transport aircraft and helicopters. We are now planning to induct them into the fighter stream to meet the aspirations of young women of India.” His statement came after many years during which the IAF and the Ministry of Defence (MoD) refused to consider the possibility of women in combat. But since then things have moved rapidly and the CAS appropriately enough chose International Women’s Day 2016 to reveal that the country would soon get its first batch of female fighter pilots. To dispel any impression that Bhawana Kanth, Mohana Singh and Avani Chaturvedi might end up as mere window dressing or public relations mascots he announced that they would later join regular fighter squadrons and fly along with their male counterparts.

All fledgling IAF pilots begin with Stage-I flying training for six months on the Swiss Pilatus PC-7 Mk II turboprop trainer at the Air Force Academy, Dundigal. Thereafter, the trainees are trifurcated into the fighter, transport and helicopter streams. Stage-II training for the fighter stream is conducted for the next six months at Air Force Station Hakimpet on the indigenous HJT-16 Kiran Mk II jet. After the three women flight cadets were commissioned there in June, they were posted to Air Force Station Bidar as Flying Officers for Stage-III fighter training on the British Hawk Advanced Jet Trainer (AJT), again for six months. Subsequently, they will train on fighter aircraft for three to four years before being declared fully operational for combat flying in regular squadrons, if they make the grade. Like their male counterparts, these three women trainees are probably raring to go as fighter pilots. But what are the implications for the IAF and the armed forces?

The IAF has long had reservations about female fighter pilots. In March 2014, Air Chief Marshal Arup Raha had said, “As far as flying fighter planes are concerned, it is a very challenging job. Women by nature are not physically suited for flying fighter planes for long hours, especially when they are pregnant or have other health problems.” And despite the growing consensus regarding equality for women in every field, should this be at the cost of military capability?

Throughout history, men have done the fighting and women have stayed home. But there have been notable instances of women making a mark in combat. Joan of Arc (1412–1431 AD) is considered a heroine of France for her military exploits during the Hundred Years’ War. She was captured and burned at the stake at the age of 19. Rani Lakshmi Bai of Jhansi (1828–1858 AD) gave up her life fighting the British during India’s First War of Independence. As far as military aviation goes, World War I was an all-male affair. However, during World War II, the Soviet Union deployed several women aviators in combat. Lydia Litvyak, the most famous of them, needed just two combat missions to score an aerial kill and become the first woman to do so. She was downed fighting the Germans, but not before scripting an impressive combat record – 11 solo victories and three shared kills in 66 missions. This is the highest by any woman pilot and in fact, Litvyak and her squadron mate Katya Budanova (11 kills) are the only two female fighter aces in history. Seventy years later, women fighter pilots appear only in small numbers.

So why is the IAF venturing down an avenue that few have trod? Most likely, the decision came from the highest level of the government because the IAF’s move was followed by a more sweeping announcement by President Pranab Mukherjee in February 2016 that women would be allowed into all streams of the armed forces, including all combat roles. However, a couple of days later, Defence Minister Manohar Parrikar clarified that this would be done in a phased manner because suitable infrastructure such as accommodation and other amenities necessary for women, needed to be created. He repeated this message when the women fighter pilots were commissioned in June.

…war is often dirty and every male pilot knows that his treatment, if taken alive, might not be less repugnant than that of a woman captive.

Across the world there is an increasing focus on women in the military. Although in most cases they are barred from combat, this is gradually changing. Already perhaps 25 nations accept women in combat roles, albeit in small numbers and with restrictions. The most far-reaching change is in the United States where all combat roles, without exception, were opened to women from January 2016 onwards. There are already an estimated 201,400 women in the US military, about 15.5 per cent of the active-duty force, and the latest decision seems set to trigger a significant surge in numbers.

The transformative nature of the US move was revealed by Secretary of Defense Ashton Carter, “They will be allowed to drive tanks, fire mortars and lead infantry soldiers into combat. They will be able to serve as Army Rangers and Green Berets, Navy SEALs, Marine Corps infantry, Air Force para-jumpers and everything else that was previously open only to men.” Women have also risen steadily in rank and responsibility. In March 2016, Air Force General Lori Robinson was nominated to head the US Northern Command, the first woman to lead a combatant command in US history. It also seems more than likely that early next year “the world’s most powerful man” and Commander-in-Chief of the US military will be a woman. The last 14 years have seen 161 US women soldiers killed and 1,016 wounded in Afghanistan and Iraq.

While the US decision is in keeping with its wider emphasis on gender equality, the UK seeks to remove its ban on women in combat for a different reason – to counter a severe male recruitment deficit. Closer home, Pakistan already has about 20 female fighter pilots under training, with one dying in an unsuccessful ejection in November 2015. The IAF’s first women officers were commissioned in ground duties branches in June 1993 and as aviators in December 1994. At last count, there were over 1,300 women officers in the IAF of which 94 were transport and helicopter pilots and 14 were navigators.

Whenever the topic of women in combat roles is broached, certain objections emerge. Thankfully, menstruation is now off the list. It kept women out of the US space programme for many years. But other concerns abound, like pregnancy and the threat of rape if taken captive. Women fighter pilots who get commissioned around the age of 23 are likely to soon get married, get in the family way and have to be kept off flying. Or so the argument goes. Accordingly, the IAF has “advised” the first three women fighter pilots to delay motherhood for at least four years, so that their training to fully operational status may proceed smoothly.

One thought on “Women Join the Fighter Stream of the IAF: Will It Work?”