Women in the Army: Upside Down Logic! 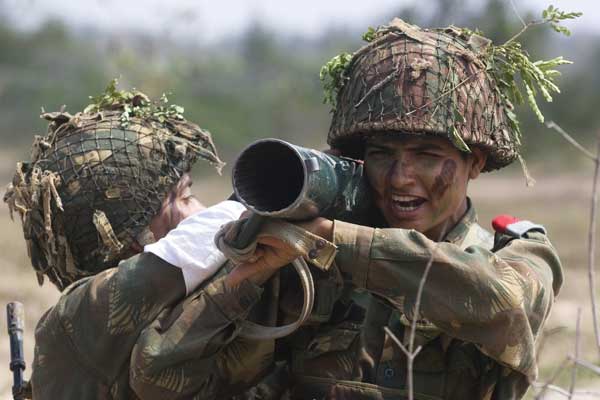 In our haste for making armed forces gender ‘neutral’ and provide equal opportunity to woman, we seem to have embarked on a spree to make drastic changes in our institutions and recruitment policies. The fear of being equated with woman-hating Taliban seems to have silenced the cautionary voices that advocate a more nuanced and gradual approach. We seem to be in a hurry to usher in the ‘brave new world’.

A war between nations is the reality of world. The only morality in war is victory. Wars obey not ethical, moral or legal laws and are a brutal contest in killing. If war is lost, the nation can neither protect nor preserve its principles, culture, philosophy and certainly not equality of opportunity. Of all the nations in the world, this is one lesson that a pacifist India ought to have learnt from its dismal history of invasions. In real world as opposed to ideal one, it is not ‘Satyamev Jayate’ (truth always triumphs) but what prevails becomes the ‘new’ truth!

The raison d’être for the Armed Forces is to win battles and war by using physical force. It is the ‘final argument’ when all else fails. The Armed Forces do undergo administrative and other organizational changes but their only purpose is to improve effectiveness and efficiency.

Armed forces ought not to be looked upon merely as a source of employment, much less as equal opportunity employers. If at some future date robots were to take over fighting, the armed forces would employ them and replace the men and who were performing those functions. Armed forces are meant to protect democracy and equal rights, NOT practice these within their own structure and organization. Wars can neither be fought nor won on democratic principles; these are nasty and brutish aspects of human existence since times immemorial.

Now that the decision has been taken to accept women cadets in the National Defence Academy, here are some ideas about how the decision can be implemented. We intend to deal only with the possible role of women in the Army.  As to their place in the Air Force and Navy, the issue is best left to those who understand these two services better. There is a great difference in the working environment and battlefield requirements between these two services and the Army. In the case of the Air Force, it is only the pilots and the crew who fight while the rest are in supporting roles. An individual Air Force pilot is akin to a gladiator, while in the Navy the fighting unit is a ship comprising several individuals. The living conditions do not change whether the ship is actually fighting or not. The air war consists of short and intense engagement, at the end of which the pilot returns to his base. In the case of the Army, battles last for days on end and human endurance is taxed to its limits. Thus when one considers the role of women in armed forces, it is better to consider it service wise rather than lump them together.

We would do well to remind ourselves that the role of the Armed Forces is to prevail in war and do their utmost not to lose even a single battle. The Armed Forces should not be treated as ‘equal opportunity’ employers at the cost of their effectiveness or efficiency. From among the volunteers who offer themselves for service in the Armed Forces, only those who meet the laid down standards should be accepted and that too on a competitive basis.

Should they also be eligible for commission in all arms and services? The answer would seem to be only a qualified, yes that is if they are likely to improve the efficiency and/or effectiveness of the parent organization and on a competitive basis at that. Woman’s role in combat arms has to be studied in depth before coming to any conclusion. The peculiar living conditions on border, 24×7 and 365 days nature of army’s job even in peace time has to be factored in.

The women need not look upon joining the Armed Forces as a challenge to their womanhood. There is nothing that women have to prove at this point of time.That happened a long time ago. In contemporary times, the Rani of Jhansi was a “man among mutineers,” wrote Sir Hugh Rose, who led the British forces against her. “She used to dress like a man (with a turban) and rode like one.[1].

Gen Sir Hugh Rose had to take to the field to defeat her. Many among her enemies felt that she had better strategic and tactical ability than anyone else on either side. There have been many other examples of women leaders like Chandbibi of Ahmednagar, Rani Chennama of Kittur and the redoubtable Queen Tarabai who defeated Aurangzeb.  And this was so when battles were won or lost in hand-to-hand fighting when skulls were split open with cavalry sabres. War was brutal then and it is brutal now. Because the force is applied from a long standoff distance, the ugliness and barbarity involved are not directly visible, except at the receiving end. But they are there all the same.

Should we be exposing our women volunteers to the barbarity of actual combat? Very few would say yes. And what about the fear of being taken prisoner of war? What happened to Captain Kalia in 1999 during the Kargil battles? The answer would be, ‘we have no reason to expose women to such possibilities’. We are not short of manpower, or volunteers in India.

One simple considerations can guide us in determining the participation of women in the Armed Forces: women officers should have the potential to add to the effectiveness and efficiency. In no case should standards be lowered. Every arm and service and all field formations can carry out such an exercise. It should be possible to compute the available slots and the number of vacancies for women cadets on that basis.

It has been some time since women have been enrolled in the armed forces the world over. There is a rich source of experience available in those countries. It will be worthwhile to form a study team and find out the administrative and tactical issues faced by these armies and learn from them.

Much of the inspiration for a role for women in the army seems to come from the USA. Indian and US social conditions differ vastly and it would be unwise to follow them blindly. We do not have a dearth of volunteers among men.

In the second decade of the twenty-first century, India faces daunting challenges on the security front. Geo-political changes in the neighbourhood and the looming threat from a rising superpower like China have brought the likelihood of a conflict far closer than many think. At such a time, any tinkering with the basic organization that puts an extra burden on the leadership and administration in pursuit of an illusory man-woman ‘equality’ should best be avoided. Litigation to enforce equality may not yield what we are looking for: creation of opportunity for women to serve in the Army without creating adverse impact on its effectiveness.

The best course would be to take decisions after detailed study in which woman members should participate, at the end of which a commission could be appointed to evaluate the impact of the decisions and apply course corrections and changes, certainly not by judicial fiat based on incomplete understanding of the phenomenon of war! Else future historians may we have to write that woman won equality of opportunity but the nation lost wars!

5 thoughts on “Women in the Army: Upside Down Logic!”