It is but natural that post the decision to induct women officers in the IAF, the debate would ensue whether the Army and Navy would induct women into combat. One wonders if the said decision of inducting women as fighter pilots was of IAF’s own volition alone and is it linked to the report by the Standing Committee on Defence submitted to Parliament this April wherein it was brought out that the IAF’s current fighter aircraft to pilot ratio is 1:0.8 – sanctioned strength less than that of our adversaries (Pakistan Air Force fighter to pilot ratio is 1:2.5). This is far less than the authorized figure of 1:1.25 and was responsible for depreciating the force’s operational capabilities.

The shortages of IAF pilots would have been far greater if they would not be virtually barred from switching to civil commercial airlines.

In 2006, some 200 IAF pilots wanted to quit as reported by India Today. But all said and done, why did this decision take so long when the many countries including China and Pakistan have had women fighter pilots past several years. Women pilots have been flying helicopters and transport aircraft. Helicopters are slow moving and transport aircraft are bigger targets to be shot down forcing pilots to bail out compared to fast moving fighters. Whether this delayed decision was because of lack of any military professionals in MoD or because of shortages of pilots, it was long overdue and should be welcome.

Some 33 countries around the world have women in their militaries including the US, Russia, France, China, South Africa, Australia, Israel, South Korea, Pakistan, Bangladesh, Sri Lanka, Germany, Britain, Canada, most trained and employed in combat duties. Women in Pakistan Army have been trained in combat missions particularly in sniper, airborne and infantry warfare, as reported by Wikipedia. Most insurgent and terrorist movements have female cadres who operate as guerillas, one example being Maoist movements including in Nepal and India. Women have been integral to LTTE armed resistance. Photographs of Yezdi-Kurdish girls in their teens battling the ISIS are flooded on the social media today.

Armies around the world who permit combat roles for women make no allowance for women compared to the men in terms of training, living conditions and operations through the rank and file.

In the Indian Army, women officers are already part of Engineers, Air Defence Artillery, Signals, ASC, EME, AOC, JAG and AEC, receiving permanent commission in the latter two and 14 years commissioned service in the balance. They are serving in operational areas as part of their service including in difficult areas. While they have been demanding that they be permitted to be part of all combat forces; giving them opportunities of frontline leadership role in combat and management of all other connected aspects of operations, logistics and administration, the inhibitions aired generally are: vast and difficult terrain that the Army is deployed in; physical demands especially in areas like extreme high altitude; family posting; close quarter combat; mistreatment post capture by enemy etc.

In this context, it may be noted that wherever the women officers have been posted, no case has been reported where they were unable to deliver. During the Kargil Conflict, helmeted women officers of an engineer regiment stood steadfast under intense shelling supervising construction of a new road in Turtok Sector. Armies around the world who permit combat roles for women make no allowance for women compared to the men in terms of training, living conditions and operations through the rank and file. If women in guerilla outfits are able to undertake ground level combat, there is no reason they cannot as part of armies, which they are already doing many places. Take the case of 18 year old Saria Zilan (photo below) from Syria who is fighting ISIS and captured one of them alive. 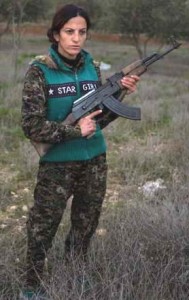 Do our men know how to behave with women? Well, as mentioned above we already have women in the Indian Army, and there have been no problems as such. But one is reminded of an incident when the first civil commercial flights for military troops commenced operations between Leh and Delhi.

During one of the first flights as the air hostess brought in a tray of breakfast and offered it to the passengers (soldiers in combat uniforms), a first soldier promptly sprang to his feet and told her “Madam, pehle aap leejiye”” (Madam, first you take – the breakfast). Readers may draw their own conclusions.

Sure the treatment of women in combat, if captured, will likely be heinous and barbaric. But then where are conventional operations being fought? Has the conflict not transformed into battling the sub-conventional and irregular forces? With conflict having become borderless, are we not witnessing large scale barbarianism against women? Look at the horrendous treatment that the ISIS is meting out to of defence-less women in Iraq-Syria, some now picking up weapons in defence? In such an environment, don’t the women volunteering for combat arms understand such possibilities? It is reiterated that women in combat arms in foreign militaries are give no allowance in terms of service conditions and physical rigours compared to men in the combat zone – and this is not in officer category alone but also in rank and file.

Disclosure of “Maya”, the US special operations female operative posted in Islamabad who uncovered the location of Osama-bin-Laden underscores the role women can play in special operations also. In August this year, two American women became the first female soldiers to graduate from the elite School which feeds the US Special Forces. Incidentally, 19 women began the rigorous 61-day training program at the Ranger School in April but 17 were eliminated. However, the two women qualifying the course have proved that determined soldiers irrespective of gender can achieve his or her desired potential. The Ranger School permitted women for the first time this year, following President Obama’s 2013 request that the Pentagon order all branches of the armed forces to open up ground combat roles to women by 2016. Whether they eventually join the USSF is yet to be seen.

When our CRPF have raised women battalions, can the Territorial Army induct them too?

Incidentally, in 2010, the US Army raised Cultural Support Teams (CSTs), a secret program to insert women alongside Special Operations soldiers undertaking operations in Afghanistan, Army’s reasoning being that while the special operations teams were conducting operations, the accompanying CSTs had a calming effect; they could search women for weapons an gather crucial intelligence that men of the special operations teams could not, especially in any Islamic country. Though their role was centred on winning the hearts and minds (WHAM) of the population, the CSTs actually were employed in the combat zone and theirs was a highly specialized and challenging role. Those interested, should read Gayle Tzemach Lemmon’s book ‘Ashley’s War: The untold Story of a Team of Women Soldiers on the Special Ops Battlefield’ to understand how CSTs functioned in the combat zone.

Women make up about 15 percent of army personnel in the US Army. Since the decision to open combat positions to women, about 91,000 posts out of some 331,000 previously closed have been opened, according to US DoD. In the US, the first US female supply officer was assigned submarine duties on board USS Ohio (SSGN 726) in 2012. In Britain, 2014, three women became the Royal Navy’s first female submariners in 2014. When our CRPF have raised women battalions, can the Territorial Army induct them too? Our Army should have considered women in niche areas like cyber security, software development and the like for giving continuity, by employing women officers for their entire length of 14 years of service. A suggestion to the effect got bogged down on questions like how their promotions would be managed in such case. But the bottom-line is that for women to join combat arms (whether only in officer category or to include all ranks and file) it is for the military to take a call on the issue, particularly the Army as to which combat arms can they join. Certainly it would also help plug shortages.