Will Advances in UAVs Edge Out Manned Aircraft? 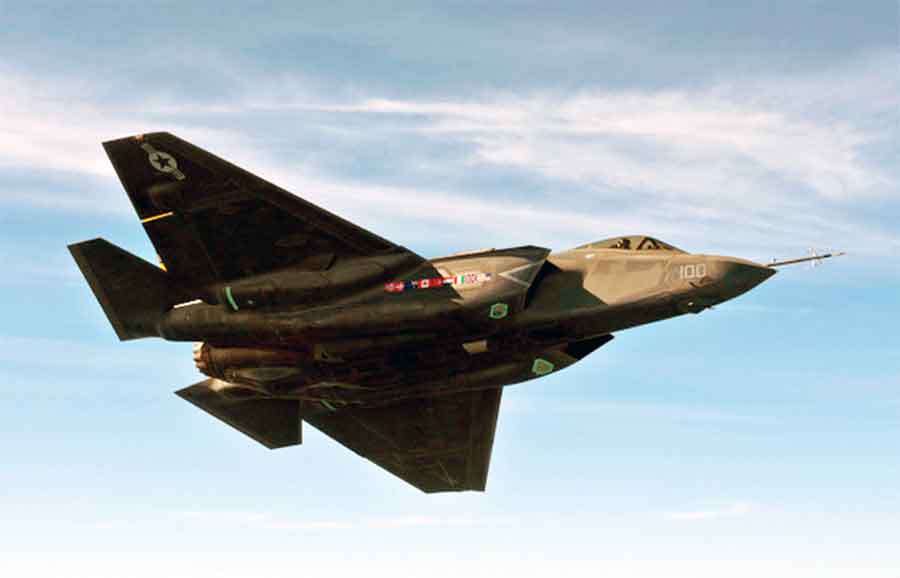 Technologically speaking, a comparison has been made by some between the MQ-9 Reaper UAV and the A-10 (and even the F-16) for some combat roles. The Reaper is a 4.7 tonne, 11.6-metre long aircraft, with a 21.3-metre wingspan with six hard points and capable of carrying 682 kg of weapons including up to eight Hellfire missiles, two Sidewinder or two AMRAAM air-to-air missiles, two Maverick missiles, or two 227-kg smart bombs (laser or GPS guided). It has a maximum speed of 400 kmph and can stay aloft for 15 hours.

Needless to say, the pace of UAV design and development will produce ever more competent platforms for the ‘strike’ variety of roles. There are indications that small and highly manoeuverable and agile aircraft may be supplanted by multi-role, long-range, stealthy aircraft of comparatively huge dimensions.

The leading edge of technology in the strike arena is represented by the Joint Strike Fighter programme F-35 which is emerging after a 15-year development stage into a phenomenally expensive, ‘fifth generation’ epitome of strike aircraft. The debate on unmanned aircraft is starkly manifest in the approaches of the US Navy and the US Air Force (USAF) to the F-35.

On 15 April 2015, the US Navy Secretary, Ray Mabus reportedly stated at a Sea-Air-Space Exposition near Washington, “The F-35C should be, and almost certainly will be, the last manned strike (emphasis mine) fighter aircraft the Department of the Navy will ever buy or fly… Unmanned systems, particularly autonomous ones, have to be the new normal in ever-increasing areas.” He did indicate that for air-to-air combat roles, the Navy would still need fighter pilots.

The USAF, on the other hand, does not consider the F-35 to be the last manned fighter on its inventory. It is indeed increasing its reliance on unmanned aircraft for long duration flights and is replacing the U-2 spy plane with the Global Hawk; it is also acquiring more Reapers to upgrade its surveillance fleet. It still feels that the human brain is irreplaceable as a sensor in the air superiority domain and is studying what its future fighter fleet will look like through the creation of the Next-Generation Air Dominance Program to determine what will be needed for air superiority in 2030.

According to USAF Chief of Staff Chief of Staff General Mark Welsh, “We are looking at sixth-generation capability. Air superiority is a mission. It’s not a platform, it’s a mission.” According to him, pilots would be needed in the cockpits of most of USAF combat fleet for the foreseeable future and even the next-generation stealth bomber that someday might be optionally manned will start out with pilots in its cockpit.

Earlier this year, US based Centre for Strategic and Budgetary Assessments (CSBA), an independent research institute that studies US national security strategy, conducted a historical survey of trends in air-to-air combat operations and presented its findings in a report entitled “Trends in Air-To-Air Combat: Implications For Future Air Superiority”. The overall conclusion of the report was that over the past few decades, advances in electronic sensors, communication technology and guided weapons have fundamentally transformed the nature of air combat. While post World War I, pilots relied for about five decades on the human eye as the primary sensor and guns/ cannons as the primary weapons, with the ultimate aim of air-to-air combat being to get behind the tail of the enemy aircraft.

By the mid-1960s, new aerial weapons and sensors appeared which included IR and radar-guided missiles and air-to-air radars. Thus aerial combat theoretically permitted attacks from front, side or rear and, most importantly, Beyond Visual Range (BVR) with air-to-air radars capable of picking up targets at long distances of 15 nm or more.

The report is based on analysis of 1,450 air-to-air victories and finds that there is a reduction in the utility of some attributes like speed, acceleration, agility and manoeuverability traditionally associated with fighter aircraft while there is increasing reliability on sensor and weapon payload and range as enemy aircraft can be detected at long distances.

Although the report does not indicate so, this author feels that a conclusion can be drawn from its findings that the increased importance of electronic sensors and robust LOS networks in building dominant situational awareness so vital to aerial combat, and the potential reduced tactical utility of high speed and manoeuverability could mean that there is a case for unmanned air combat or air superiority fighters in the future.

Given the nature of anti-terror operations, UAVs present an advantage over manned aircraft in as much as there is no political cost to a UAV getting shot down. The use of an unmanned vehicle avoids a diplomatic embarrassment in case a manned aircraft is shot down and the pilots captured, since the bombings take place in countries are sometimes deemed friendly and the attacks are being conducted without the official permission of those countries.

The US has been relying on “shock and awe” as the most efficient way of fighting asymmetric threats in irregular warfare is to conduct fast and destructive operations in order to incapacitate the enemy. MQ-1 Predator UAVs armed with Hellfire missiles have been used by the US as platforms for striking ground targets since 2001. They were first used from bases in Pakistan and Uzbekistan, mostly aimed at assassinating terrorist leaders inside Afghanistan and later for attacks in Afghanistan, Pakistan, Yemen and Somalia.

In May 2013, President Obama announced major changes in the policy on use of UAVs in war with the aim of reducing civilian casualties. Under the new policy, a strike cannot be made unless the government has knowledge of “near certainty that the terrorist target is present” and of “near certainty that non-combatants will not be injured or killed”. However, in January 2015, two Western hostages were indeed killed as a result of a UAV attack on an al Qaida hideout in Pakistan. That brings us to one of the difficulties perceived as being associated with the absence of a human being on the spot to take decisions. Naturally, a possible counter to that argument is that even a human pilot could have made that error in the heat of the attack.

Aside from the attention grabbing F-35 and F-22 programmes of the US, manned aircraft development is making progress in many countries with the technological infrastructure to manufacture aircraft; Russia, China, South Korea, Japan and several European countries are engaged in efforts to produce fourth/fifth generation fighter aircraft. According to Russia’s United Aircraft Corporation, Russia will receive its first batch of fifth generation manned fighters in late 2016 or early 2017.

China, of course, has advanced programmes in fighter aircraft development, its only Achilles’ heel being indigenous power plants to install on its new aircraft designs. It is even planning to produce a long-range strategic bomber (defined by China as an aircraft that can carry more than ten tonnes of air-to-ground munitions up to a minimum range of 8,000 kilometres without refuelling). Even India, with a dismal record in that domain touts the Tejas as a modern fighter aircraft. Despite the huge costs of a modern fighter aircraft, every Air Force in the world has aspirations to acquire at least fourth generation manned fighters, if not fifth.

Misplaced and over-optimistic faith in technological advances has spawned predictions in the past about the impending demise of the manned aircraft. British PM Baldwin claimed in the 1930s that, “the bomber will always get through” and that defensive fighters were, therefore, futile. Following on from that, a 1957 White Paper on defence slashed a number of British fighter programmes because surface-to-air missiles were expected to render manned fighters obsolete in a few years. However, manned fighters still form the major proportion of airpower.

The wars in Afghanistan and Iraq, where unmanned aircraft flew unchallenged, have encouraged the case for unmanned aircraft – a conclusion that needs to be taken with caution as all scenarios may not be similarly benign and impotent in terms of air or ground defences. A study of the arguments on both sides and the emerging developments in UAVs suggest that the future of air power will inevitably integrate manned and unmanned platforms in the air with both complementing each other and performing appropriate roles as instruments of air power for ensuring national security; India appears to be on the right track on this count.

One thought on “Will Advances in UAVs Edge Out Manned Aircraft?”