Home  >  News  > Geopolitics  >  Why Iron Dome will short? What could be done: A Viewpoint?

Why Iron Dome will short? What could be done: A Viewpoint? 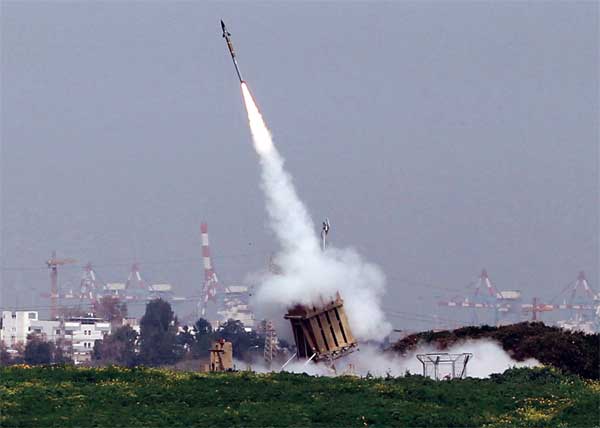 This article argues that in the ‘duel’ involving the launch of rockets by  Hamas, Fatah, Islamic Jihad and other Palestinian left wing groups from Gaza  and their engagement by the Israelis using the Iron Dome air defence system, the latter will fall short on several counts.

What could be done to address the above situation – the author presents a viewpoint.

The issue has been examined in its entirety staring from the perspective of the eternal cause-effect cycle between air threat and air defence.

All air defence weapons,be it on land, sea or air, exist for the sole purpose of countering the adversary’s threat that is prosecuted from the air. Following therefrom, the air threat on one side and the air defence weapons on the other, are tied in an eternal cause-effect cycle – a cycle, in which THE AIR THREAT DRIVES AIR DEFENCES.

When the air threat was a mere propeller-driven aircraft throwing some dumb bombs and unguided rockets, the air defences were limited to either  air combat with similar primitive machines or some air defence guns generally throwing a volume a fire on the threat with a hope to ‘scare away the pilot’- lucky, if a few were downed!

Today the air threat is multi- platform and multi-dimensional. It is  prosecuted on the might of third to fifth generation aircrafts with best of avionics, munitions and stealth, fearsome attack helicopters preying on their targets in a hide-seek terrain-hugging profiles, needle sharp cruise missiles, unforgiving anti-radiation missiles capable of taking out air defence sensors not to talk of the ever revamping arsenal of surface-to-surface missiles (SSMs). Besides,there is revolution of sorts brought about by the ‘dull, dirty and dangerous’ Unmanned Aerial Systems (UAS) causing havoc on the battlefield. Today’s air threat rides on the enabling wings of technology – AI, soft kill means, precision guided munitions… it’s a whole package.

Accordingly the air defence means have measured up to the threat in the spirit- ‘to every sword a shield’. This has not only happened in terms of  aerial combat means ( aircrafts, AHs, air-to-air missiles, UAS and more), but also,the ground-based air defence weapon systems (GBADWS) have metamorphosed. Revolution in gun munitions, rates of fire crossing hundreds and thousands of rounds per minute, surface-to-air missiles (SAMs) crossing new frontiers in range reach and kill probabilities, high-tech sensors that won’t let a threat pass by unnoticed… the battle to kill every threat remains an eternal challenge .

The Balance between Cause and Effect

The above cause-effect cycle remains in a dynamic equilibrium so long there is a balance. This is the balance of ‘comparative cost of kill’, which means that costs which an attacker incurs in prosecuting the air threat compares in some measure with the cost incurred by the defender in putting up the counter.

Whenever the above balance is becomes skewed, the duel becomes asymmetric with disproportionate advantage to one side. This is further elaborated.

When the UAS became armed combat platforms enable to kill either stand alone, or fighting shoulder-to-shoulder with combat platforms, the defenders let go their SAMs to counter them. On one side were a few hundred or thousand dollar UAS, on the other were millions of dollars of SAMs. The balance started to become skewed. This totally went out of the window when the attackers started to press in multiple small UAS in groups or swarms to press home the attack.

On one side the cost of attack went further down while on the other, the SAMs proved incapable to take out the whole swarm, not to talk of huge cost differential. Perforce, the defenders started to look for solutions other than SAMs to take on the UAS!

Another classic case is of stealth technology. Initially when the attackers started to employ stealth in their aerial threat vehicles, the gains to them were disproportionate as most of the deadly combat aircrafts escaped radar detection to cause havoc. By any by, as the defenders developed stealth- capable radars ( bi-static/multi-static radars, LIDARS, passive radars, AESAs , quantum radars and more), the comparative costs to attackers to continue to maintain the stealth edge that will still beat the vast radar arsenal started to become disproportionate.Professionals opine today that in the stealth-anti stealth duel, it is the defenders who will have the last laugh.

APPLYING THE ANOLOGY OF BALANCE TO ISRAEL

Similar is the case of killing the Hamas rockets with Iron Dome system. Besides everything else, this scenario will continue to inflict disproportionate costs of kill to the Israelis.  This is explained further.

The Rockets launched on Israel

(The above list only includes some not all rockets)

What do the factual details convey?

Besides all the mass protection means such as the bomb shelters in houses or large underground shelters for community protection etc, weapon-to-weapon, it is the Iron Dome Air Defence system that is deployed at various locations to intercept the incoming rockets and missiles.Following points are stated about this system:-

POINTS OF CONCERN WITH IRON DOME

There are two points of concern with the continued use of Iron Dome.

Some facts are quoted below:-

From the aforesaid, following deductions are made:–

A POSSIBLE WAY OUT

A viewpoint is presented.

This is the desired end state:-

What options are available?

In order to achieve the above end state following three options are available. All of these need be used simultaneously.

The concept of the gun option is briefly enumerated:-

What needs to be done

This option which involves killing of the rocket threat by directing killer laser waves is already under use by the Iron Beam system and the THEL system.The problem being faced in such weapons world-wide is to be able to generate adequate power to enable laser kill rays to achieve reasonable ranges. Following points are stated:-

This solution is offered as an idea at this stage. Same is stated very briefly:-

In the eternal duel of air threat and air defence, the cost of kill must remain commensurate to the cost of attack … PENNIES MUST BE KILLED BY PENNIES NOT DOLLARS!

[11] “Isreal’s Missile Defence Systems,” at www.jewishvirtuallibrary.com. Accessed on 25 May 2021.