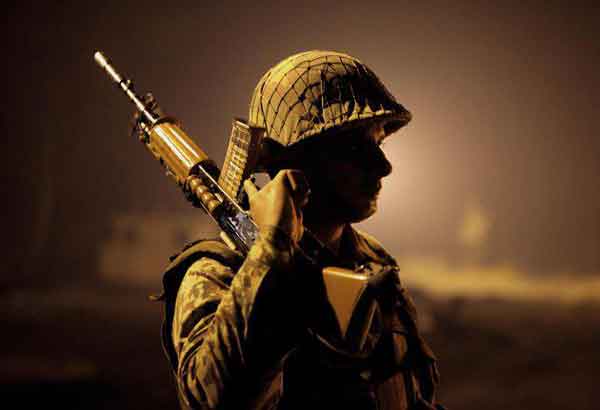 The country is at war, make no mistakes about it. Many eyebrows will be raised asking ‘Where is the war?’ Von Clausewitz had many aphorisms, of which the most famous is “War is the continuation of politics by other means.” And today the ‘other means’ has graduated from direct conventional conflict to pursuing national objectives through low cost  terror, proxy surrogate insurgents, disinformation or misinformation, propaganda, undermining instruments and institutions of state and in fact any means aimed at imposing your will on the adversary. We are witnessing all this in J&K. That is where today’s war is being fought.

Universally, countries spend in proportion to their economic development or in direct response to immediate security threats. We seem to be guided by neither.

When all instruments of state fail to contain the situation, the Army is employed, albeit for a role it is primarily not trained, structured and legally and constitutionally mandated. For any conflict which has a military dimension, the triad of Government, People and the Military must complement each other. The Government must set clear policies and objectives, the people must support the objectives and the military must thereafter prosecute the military objectives from the sub conventional and in the ultimate to all out war.

A clearly defined politico-military objective is the base on which national policies are formulated, military capabilities created and action directed.

National security is ultimately a question of evaluating security threats and national interests and deciding on capabilities to meet or secure them. Capabilities in turn mean expenditure. The first must take the shape of a ‘Strategic Defence Review’ and define our responses in terms of military capabilities to be created and maintained. In our context we are unique in never having formally articulated our security concerns and how we intend to address them. We are insecure in stating our security concerns.  Universally, countries spend in proportion to their economic development or in direct response to immediate security threats. We seem to be guided by neither. Defence spending as a percentage of GDP is the lowest since 1962.

We have a dysfunctional civil-military equation and no formalised and structured forum for collective analysis and policy formulation at the highest level. Views and concerns of the military are more often ignored and sidelined and all is assumed to be well. If and when a crisis situation does develop, the response is naturally ad hoc. In other words there is no formally articulated policy and approach for handling our security concerns.

We have an Army which has never been adequately equipped with even the basics like boots, helmet, rifle and bullet proof jackets. Not much has changed since the Army Chief’s Kargil declaration to ‘fight with whatever we have’.

The lack of adequate funding over a long period has resulted in ‘hollowness’ in our capability to sustain a conventional conflict. Resultantly, we do not have the wherewithal to move up the escalatory ladder in response to sustained Pak sponsored proxy terrorism. We have an Army which has never been adequately equipped with even the basics like boots, helmet, rifle and bullet proof jackets. Not much has changed since the Army Chief’s Kargil declaration to ‘fight with whatever we have’. The option of conventional response has been foreclosed.

As Churchill said the Armed Forces are not like a limited liability company to be reconstructed from time to time as the money fluctuates. It is a living thing. If it is bullied, it sulks, if it is unhappy it pines, if it is harried it gets feverish, if it is sufficiently disturbed it will wither and dwindle and almost die, and when it comes to this last serious condition, it is only revived by lots of time and lots of money.

What then is our perceived policy towards the proxy war in J&K? Indian policy appears to be on one hand to eliminate as many ‘terrorists’ as possible to force a political solution and at the same time accept security forces casualties as acceptable. What has not been factored is the intangible and intrinsic aspects of terrorist staying power of fresh recruitment, home-grown or externally sponsored, and the attitude of the local population.

The Americans in Vietnam hoped to achieve a ‘tipping point’ forcing the North Vietnamese to negotiate due to the aerial bombing of the North and killing Vietcong in the South. It never came. Unremitting Pak sponsorship of the proxy war would and should result in retching up the escalatory ladder up to the full conventional level to deter and punish. That response is precluded due to lack of capability or ‘hollowness’.

Pakistan may not have achieved cutting away Kashmir from the Indian Union but the three decade employment of the Army in its sponsored Proxy War has resulted in the Army being permanently employed on an armed constabulary role while the 1.4 million strong Central Armed Police Forces and Para Military has practically relinquished their primary internal security mandate.

It may not be too far off when the Army too thinks, acts and performs as such with the attendant duplicity, political game play and un-soldierly conduct.

The nomination of the Army Chief by stepping over others for his experience in ‘counter insurgency’ has put an official stamp on this role. The next chief in all probability will also be selected by supersession citing similar experience. This was further reinforced by the Pay Commission equating, and in some areas, lowering the armed forces in relation to these forces. Three decades of armed constabulary work has resulted in the Army imbibing the ethos, culture, attitude and approach to the civil population of these forces. It may not be too far off when the Army too thinks, acts and performs as such with the attendant duplicity, political game play and un-soldierly conduct.

The Army cannot be deployed on internal security duties in ‘aid to civil power’ or  ‘disturbed areas’ without the mandated legal sanction and protection. The Armed Forces Special Power Act was enacted for this purpose. Politics and judicial intervention has practically left the soldier devoid of this cover with resultant prosecution and confusion.

Perception of successive pay commissions handing out an unfair deal, ignoring the anomalies, disrupting rank equation and issues like non functional upgrade rankle both the serving and veteran community.

Under these conditions a soldier perceives himself as being expendable, inadequately equipped, equated with a policeman, failed by his senior leadership, used by the politician and unfairly compensated. The country has failed the Army by not providing the clarity of objectives, legal framework, capability and ethical backing. The senior military leadership has failed the rank and file by not taking the inbuilt correctives within the military justice system and discipline to deal with any actions outside the laid down parameters, if there was any transgression, and not standing by the rank and file if there was none and they were being hounded on false grounds. The rank and file perceive the senior leadership to have failed or been unable to safeguard institutional and collective interests of the personnel.

…soldier fights best who has the least questions and doubts about why he is fighting. Under the prevailing circumstances the soldier asks ‘Why am I risking my life and limb?’

The middle rung of the Army leadership, most affected by their employment and informed through social media, is the most disenchanted unlike the lower ranks that are relatively indifferent in their ignorance and bound by discipline and the higher echelons cocooned in their self centred careerist pursuit. This is manifest in the recent Supreme Court petition by nearly 800 officers and men. This portends far reaching effect on the culture and cohesion of the Army. Any qualms about going to the courts by servicemen, once considered un-soldierly, were laid to rest when a serving chief sought redressal from the Supreme Court. Not many supported his claim and the relief sought, but many supported him for taking on the government perceived to be insensitive to the soldiers concerns.

The Army has been, and has consciously con­sidered itself, the neutral instrument of state policy. When ordered it does not ask “Why?” or “What for?” If the military is to be used for political ends and their concerns ignored, can it continue to be the innocent automaton? That soldier fights best who has the least questions and doubts about why he is fighting. Under the prevailing circumstances the soldier asks ‘Why am I risking my life and limb?’ That question is being asked in the Supreme Court. When he does not perceive or receive a convincing answer his response and attitude turns to indifference if not avoidance of the task for which he is deployed. When this attitude becomes all pervasive the consequences are that the last resort for the country is also gone.

Let the soldier’s questions be answered before we reach a stage like the Americans in Vietnam where the soldier saw himself as the unwilling, led by the unqualified, to kill the unfortunate and die for the ungrateful, with ignominious consequences.

10 thoughts on “When Soldiers Ask Questions”