When Indian Army beat back waves of Chinese attack

(Based on an interview with late Lt Col DS Thapa., PVC)

Some 56 years ago, in the small hours of October 20, the desolate Himalayan heights reverberated with the concentrated fury of artillery, mortar and small arms fire, which lit up the twilight sky and sounded like a thousand thunderclaps going all at once. The earth heaved and shook as the Chinese launched a massive and unprovoked assault on Indian Army positions. The poorly armed and equipped defenders held out against the overwhelming firepower of the enemy, determined to fight to the last man and to the last round, in the numbing sub-zero temperatures and harsh terrain, far from home. 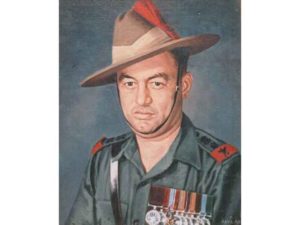 In the first light of that fateful morning and until minutes before the assault, an eerie silence had settled over the area north of Pangong Tso Lake, measuring some 48 square kilometres, dominated by the outpost at Srijap, held by a platoon of 33 odd men. A sense of foreboding permeated the air. The men, from 1/8 Gorkha Rifles, tasked with defending the territory, awaited their grim destiny, including the possibility of certain death, buoyed up by an immense faith in their commander, then Major Dhan Singh Thapa.

The jawans bore every hardship stoically, subsisting on meagre rations and coping with the vagaries of nature rather innovatively. For instance, repeated blows of the pickaxe failed to dent the frozen soil and made the task of digging trenches doubly difficult. Their native intelligence soon overcame the problem. They simply poured some kerosene oil over the spot and set it on fire, which burnt away the ice and facilitated digging. But the men could not unsheathe their khukris and kill still more Chinese, because they were stuck in their cases.

The tiny yet lightly armed force had only World War II weapons to defend their post, which included bolt actions Lee Enfield rifles, sten guns,  a couple of LMGs, a two-inch mortar and a few grenades. Being virtually isolated, they could not expect any supplies, artillery or air support. Such were the odds stacked against them, when the invader came calling around 4 am, with heavy artillery and mortar bombardment, in a bid to wipe any resistance. Could the handful of men withstand the vastly superior firepower of the Chinese, besides overwhelming numbers?

But then the Chinese with every odds stacked in their favour, did not reckon with the likes of Major Thapa, tough officers who represent the cutting edge of the Indian Army and go beyond the call of duty in protecting the country.  Even though outnumbered 20 to one, Thapa rallied his men to fight the foe with a manic determination. Their death defying ferocity broke up the first wave of the attack. The Chinese suffered heavy casualties. The platoon shone with acts of heroism, sacrifice and selflessness.

For instance, Naik KB Thapa, who had both his legs completely shattered by enemy fire, ignored agonizing pain and excessive bleeding, dragging himself to the silenced LMG nest with a superhuman will.  He directed several bursts at the advancing Chinese, killing many of them before he fell to their bullets. Likewise, Subedar MB Gurung, buried under a mound of debris from a collapsing bunker, extricated himself and mowed down the advancing enemy with the second LMG, until he died fighting.

Chinese forward observation posts, alarmed by the scale of resistance still put up by a handful of surviving men, directed a greater volume of artillery fire on the bunkers. The enemy lobbed incendiary explosives to flush out surviving men, one of which nearly burnt Major Thapa. Somehow he snuffed out the fire. The enemy advanced to within 45 metres of the Indian positions. The defenders, now down to seven, kept on fighting the Chinese with hand grenades and automatic weapons, breaking up the second wave of attack.

Finally, having run out of ammunition, Thapa noticed that some of the invaders had jumped into the bunkers. Disregarding personal safety, he engaged the enemy, killing many of them in hand to hand combat. Desperate by now, the Chinese launched the third wave with bazookas and heavy calibre machine guns, mounted on amphibious boats, from Pangong Tso lake. Major Thapa engaged one of these vessels with an LMG, amid a deadly grenade battle. By then he had lost four of seven survivors, until he and two others were overrun and taken prisoners. One of them, Rifleman Tulsi Ram Thapa, managed to escape his captors.

Major Thapa endured seven months in captivity as a POW in China. He emerged from the shadows with his spirit unbroken. Perhaps few understood the Chinese psyche better than he did. Thapa won the Paramvir Chakra for exemplary leadership and courage under fire. The warrior did the nation proud by humbling a mighty foe like China in the battle of Sri Jap (1962).

Political perfidy, then at its peak, also played a diabolical part in dumping thousands of men on the icy terrain from the plains of Punjab, without an iota of preparation, acclimatization or woollen clothing. They had been told to checkmate the Chinese PLA, poised advantageously on the heights and left to die a horrible death, by those who were unlettered in military matters.

These doughty warriors also conveyed casualties on stretchers to the nearest medical post, undaunted by the prospect of a physically excruciating climb of eight hours. It is a tribute to the resilience of the Indian soldiery which took the most adverse conditions in its stride without a murmur of complaint, while battling Chinese hordes. Can any other army in the world boast of facing such hardships so stoically?