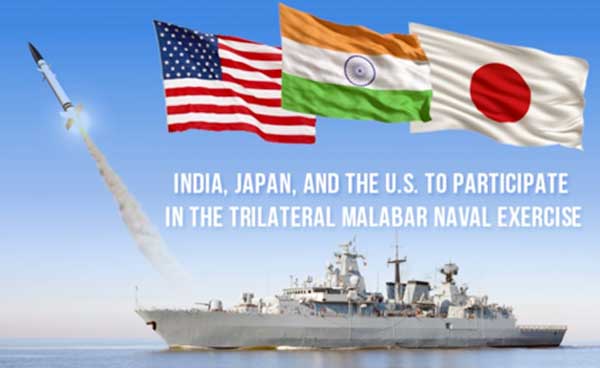 The twenty second addition of the Malabar exercise involving United States, Japan and India started off from 07 Jun till 16 Jun 18. This exercise, was conducted off the coast of Guam island in the Western Pacific. The exercise unfolded in two phases, the harbour-phase from 07 to 10 Jun and the sea-phase from 11 to 16 Jun. The harbour-phase involved subject matter expert and professional exchanges on carrier strike group operations, maritime patrol reconnaissance operations, surface and anti-submarine warfare, medical operations, damage control, helicopter operations and visit board search and seizure (VBSS) operations.

Before visiting the actions per se, a very brief look at the emerging Indo-China relations post Doklam and India’s defence cooperation relations with US and Russia is attempted.

Despite all the abiding irritants like the India’s membership to the nuclear suppliers group (NSG), listing Masood Azhar as a global terrorist, India’s concerns on CPEC passing through disputed territory, India’s NO GO at the belt and road initiative (BRI), China’s continued efforts to further populate the “string of pearls”, unresolved border and more, there appears to be deliberate attempts, especially post Doklam, both from India, as well as, China to try and achieve some kind of strategic alignment in their bilateral relations. In doing that, each of the two is pursuing its own national interests and serving the resultant strategic compulsions in a fast emerging geo-political environment.

The overt signs of such attempts are difficult to be missed. Picking up the threads from say, end last year or beginning this year, there has been a flurry of high level visits of leaders of both countries to the other side, each making positive statements aimed at building some kind of bonhomie.

In fact, on the eve of the visit of EAM, China made a statement ” relations with India has seen ‘great strides’ and that the visit of EAM will further enhance political trust between the two countries”[iii].

This was followed by the visit of Defence Minister to China where she, with her counterpart discussed the dates of the bilateral military exercise between the two countries codenamed hand-in-hand which remains suspended post Doklam (six conducted till now since 2007)[iv].

The enigma of a spirit of rapprochement on one side and increased transgressions on the other, can possibly be explained in some kind of abiding sense in the minds of top leadership to “take it forward” despite hiccups for the net perceived benefits that may accrue from such an approach.

Increased trade, improved bilateral ties and better cooperation for mutual growth appear to be the residing sentiments on either side. In that, CPEC and BRI notwithstanding, it is India’s desire to be seen as a responsible and willing team player (not a block) in shaping the global future in general and South Asia’s future in particular. On the Chinese side, constant efforts to lure India out of the strategic proximity with US in the Indo pacific region appears to be constant driver besides several other factors relating to its aspiration for a superpower padestal.

The belief, that despite negative developments in some areas, there is something that both India and China are here to gain in taking their bilateral relations forward, is getting reflected in multiple fora.

The visit of Prime Minister (PM) Narendra Modi to China for an “informal meeting” with President Xi Jinping in Wuhan, China playing a helping hand for India in grey-listing Pakistan at the Financial Action Task Force (FATF) meeting on terror financing, recent discussions between the two countries on jointly using their leverage in oil price negotiations, the on-going cooperation in climate change negotiations are some of the many examples.

This spirit can be seen to be continuing in the ongoing SCO summit at Quindao, being attended by India for the first time as a full -fledged member. Agreements on Brahmaputra flood-water data sharing, export of non-basmati rice from India and the promise to boost the bilateral trade to a 100 billion USD by 2020 are the initial positive chippings in a forum where India is pitching for regional and global action against terror networks and effective connectivity links (Chahbahar Port Project in Iran and 7200 km International North South Corridor Transport Corridor to connect with resource-rich Central Asian countries). In the scheduled discussion on furthering economic ties between the two countries, the PM is likely to ask President Xi Jinping for opening the information technology (IT) and the pharmaceutical sector to address the trade deficit that has climbed to over 51Bn USD last year[vi]

Shifting focus to USA, it is well known that America considers India as the anchor of its counter-balance strategy against China in the indo-pacific region. There are any number of indicators pointing in this direction.

Staring from the latest semantics of renaming of the US Pacific Command as US Indo-Pacific Command, US has taken a symbolic move to signal India’s importance to the US military amidst heightened tensions with China over the militarisation of the South China Sea. The Trump administration has already started using the term Indo-Pacific instead of Asia Pacific. This move is reflective of the growing importance of India in US strategic thinking.[vii].

A word about the indo-US defence cooperation. In fact, India knows it too well, that connecting with US in a win-win equation on the military cooperation front is to connect with the highway of contemporary and futuristic technologies (glitches of transfer of technology or ToT notwithstanding).

Some experts believe that the defence cooperation between India and US spearheaded under the institutional arrangement of Defence Trade and Technology Initiative or DTTI has been more of a rhetoric and less on delivery. The basic knot as per them is, that while India seeks “technology” US is fixed on “trade”. Resultantly, only 15 billion USD worth of hardware has been transacted till date comprising of patrol aircraft for navy, transport aircrafts and helicopters for Air Force and howitzers for the Army.[viii]

The author’s take on the above expert comment is different. There was a time when the Foreign Military sales (FMS) route was a big NO GO. Today it has started to move under DTTI, albeit slow; C 130, C 17 Globemaster, Apaches, Chinooks, Poseidon maritime patrol aircraft, M -177 Howitzers are/will be realities, that is the hope.[ix]

Also, the fact that US has declared India as a major defence partner under the National Defence Authorisation Act 2017, will give some more traction to DTTI. Despite the ToT knot, which is likely to loosen up, albeit slowly and selectively, there is likely to be a net forward movement in DTTI[x]. The latest gains by way of strategic agreements like LEMOA, COMCASA and in due course BECA indicates the shape of things in the foreseeable future.

It is for no small reason that US export of arms to India in 2018 increased five times as compared to previous five years. US is now pegged at No 2 position in arms suppliers to India with 15% share of Indian defence imports.[xi] According to a report released by Stockholm International Peace Research Institute (SIPRI), the US arms export to India jumped by a whopping 557% in the period 2013-17 as compared to the period 2008-12 making it India’s second largest arms supplier.

With Russia, despite a clear dip in defence relations (when the Russian courtship of Pakistan started) when India started to look westwards for its defence needs, the exclusivity of Indo-Russian relations is largely intact. Though its total share of India’s arms import may have fallen from the erstwhile 79% to about 67% in 2018, it still sits at No 1 place when it comes to the line up of arms suppliers to India.[xii] That BrahMos, Kamov helicopters, Pak FA and now S 400 are all on the cards, cannot be denied.

Talking of S 400, it is the sense of the author that should the deal come through (as it may, it looks like), the US is very unlikely to apply the sanctions on India (or Russia) under the Countering America’s Adversaries through Sanctions (CAATSA) Act. Simply, too much is at stake for US when it comes to India!

Against the backdrop of the above stated position, some decisions taken by India as related to Exercise Malabar are briefly discussed

In the 2018 edition, the Indian Navy has been represented by a stealth frigate INS Sahyadri, an ASW corvette INS Kamrota, Deepak Class fleet tanker INS Shakti and a Poseidon P8 aircraft[xiv].

While the quantum participation by the other two members remained almost unchanged between 2017 and 2018, the reduced Indian quantum, sent a strategic message both to the US as well as China; keeping the sensibilities of both alive at the same time and “preserving” the importance of each “pole” as defined above. Some expert has called it “extreme China-consciousness”[xv]. So be it. India is trying to keep alive multi-polarity and doing what is perceived best for it, on both fronts

Also, the Chinese foreign ministry spokesperson Geng Shuang, making a departure from their earlier traditional tough line of overt and covert show of displeasure, discomfiture and resistance on Malabar have stated this time, “We have no objection to the normal bilateral relations and cooperation among relevant countries, but we hope that this kind of relationship and cooperation will not be directed at any third party and will be conducive to the regional peace and stability”[xvi].

The shift towards convergence on both sides, though palpable is not discussed any further.

A lot has been said on this aspect. “India’s snub”; “India’s refusal”; “India deals a blow”. Some experts have argued on the following lines:-

Australia’s position in the quadrilateral (quad) consisting of US, India and Japan is different vis-a-vis China. In that, while the Japanese inclusion as permanent member in 2015 raised no eyebrows, Australia’s inclusion, which has named China’s rise as a cause of concern in its Defence White Paper year on year and which has unresolved maritime and territorial disputes with China, is surely going to have a negative fallout with China.

It is a quid-pro-quo as Australia provided support to Pakistan in the FATF deliberations which had kept that country off the FATF watch list.

Failure to sufficiently share technologies bilaterally; Over the horizon     (OTH) radars to India.

The authors take on India’s position is little different and is stated below:-

Australia not joining is a status-quo position.

Such a status quo kind of represents neutrality and continuing with “what is”.

Whether the perceived gains in maintaining what already has been there for the last 21 editions more beneficial or it is breaking the status quo and opening one more front of antagonism? With what gain if any?

The above analysis makes it clear that in taking some key decisions in the context of Malabar 2018, India did maintain a fine strategic balance.

[i] https://www. economictimes.indiatimes.com>india-us-japan-begin-wargame-exercise-malabar-in-guam. Accessed on 09 Jun 18.