When a Proud Community is Forced to seek OBC status ! 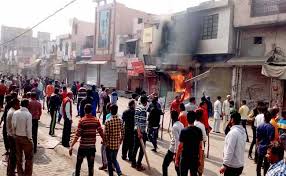 The nation was recently seized with the turmoil in Haryana due to an agitation by the Jat community of the state. The agitation took a violent turn to an unprecedented level. There was a tremendous loss of both life and property.

The Jat community is demanding Other Backward Class (OBC) status and is frustrated enough to destroy its own state in pursuance of this demand.

The Jat community has an age old martial tradition that it is proud of.  It has served the British Indian Army and the Indian armed forces with distinction. There used to be many villages in Haryana where the entire lot of men were soldiers sometimes serving in the same unit.

…implies that the younger generation of the community is no longer ready to follow the path of their elders and join the noble profession of arms.

Why then has this proud martial community been reduced to demanding OBC status?  Obviously, to garner more reservations in government jobs which implies that the younger generation of the community is no longer ready to follow the path of their elders and join the noble profession of arms.

There cannot be a better example than this of the dwindling popularity of defence forces as a career option in India. Jats and other martial races, that were the foundation of the Indian armed forces, are turning away from the service.

While defence service veterans sit at Jantar Mantar demanding better pension facilities and the bureaucracy pontificates on pay, perks and the status of the armed forces from air conditioned offices, this very serious albeit silent change in perception is taking place across the country, and especially in villages that are incubators of the soldier’s fraternity in the country.

Since the advent of civilisation, the soldier has been placed at the highest pedestal within the community, the country and the nation; this is a universal convention! In India the reverse is being attempted most forcefully. The spill over is lack of volunteers for the job.

The recommendations of the 7th Central Pay Commission, if implemented, may well be the last nail in the coffin. The recommendations are designed to place the soldiers of the nation lower in status as well as earnings vis-vis other central government servants.

Jats and other martial races, that were the foundation of the Indian armed forces, are turning away from the service.

The defence forces constitute up to 29 percent of all central government employees, with its officer cadre accounting for more than 72 percent of the Group ‘A’ officers cadre. Despite the significant representation, the aspirations of the personnel in successive pay commissions have remained unaddressed resulting in dissatisfaction within the existing ranks.

The 7th Central Pay Commission has worked out the structure in a manner which will see defence personnel co-located with their Central Armed Police Forces (CAPF) counterparts, drawing lower allowances.

While forces like the National Disaster Relief Force (NDRF) have been granted allowances for their role in disaster relief, soldiers involved in similar duty, are being denied the same.

The much talked about military service pay granted to the defence personnel, may not be unique or a distinct edge as similar, and at times, higher remunerations will exist for some other organisations like the SPG, NSG, NIA, CBI, IB, CRPF (RAF), etc.

The report further puts the defence forces at a disadvantage by not addressing certain important anomalies like non-grant of Non Functional Up-gradation (NFU).

The youth are joining the armed forces as a last option. Such a situation, naturally, impacts the qualitative standards so important for those entrusted with the security of the country.

While the monetary remunerations are not a significant demoralising factor, the loss of status and disparity experienced over the years has made the profession of arms the last choice amongst the youth, especially the younger generation of those who have served the army.

The defence forces personnel are objecting to the selective use of statistics and certain factual inaccuracies used to deny them their rightful demands as they feel that the uniqueness of their cadre has been diluted.

The reactions from various defence service personnel, both serving and retired, is indicative of the massive resentment over the report due to a perceived bias in treatment meted to the members of this oldest and elitist asset of the country.

An article ‘Armed Forces as a Career Option for Today’s Youth’, in the International Journal of Management and Social Sciences Research (IJMSSR) mentioned a very disturbing data. Only eight percent of the youth surveyed opted for the armed forces as a career as against 58 percent for central government jobs.

…nations respect a country only if it is militarily strong. Therefore, military power plays a dominant role in the foreign policy of the nation also.

Recruitment problems have resulted in a shortage of almost 20 percent shortage in the officer cadre. In the soldiers’ cadre, unwillingness to serve after the initial engagement period has begun to acutely affect retention of skilled and trained manpower.

While the marginal increase in footfalls in the last few years can be attributed to increase in unemployment nationwide. The youth are joining the armed forces as a last option. Such a situation, naturally, impacts the qualitative standards so important for those entrusted with the security of the country.

The absence of war does not, by any means, degrade the relevance of the defence forces that are an important element of the comprehensive national power of a nation. The national efforts towards economic growth and development need to be backed by a credible military power.

Other nations respect a country only if it is militarily strong. Therefore, military power plays a dominant role in the foreign policy of the nation also.

Thus, there is an urgent need to assuage the grievances of the defence forces and restore their traditional status complimented by adequate remunerations, so that, the defence forces remain an attractive career option for the youth of the country.

2 thoughts on “When a Proud Community is Forced to seek OBC status !”