Home  >  News  > Geopolitics  >  What will happen if India recognizes Tibet?

What will happen if India recognizes Tibet? 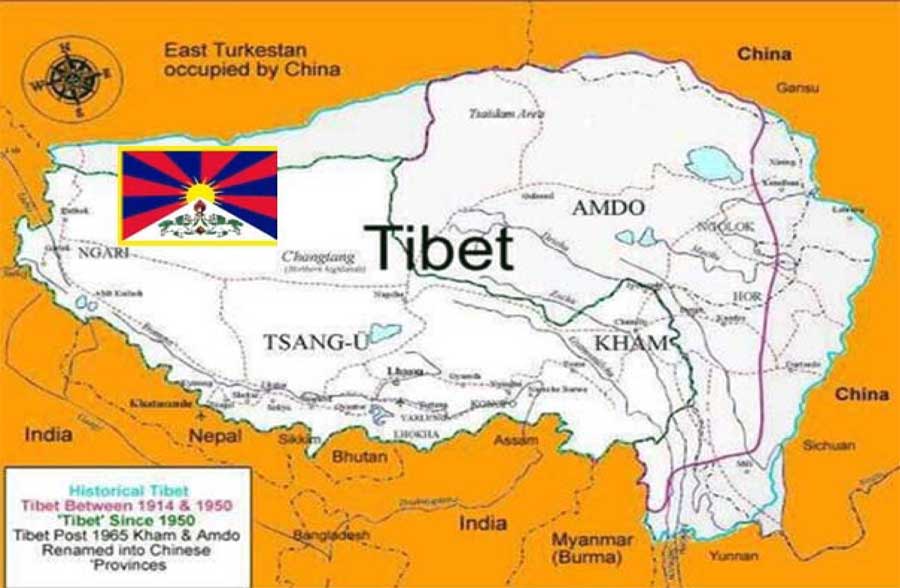 It has been mentioned abundantly by others and me that India should derecognize Tibet as part of China[1].  But, Indian politicians have perpetually been scared or hesitant to do so.  While Nehru was alive, there is some evidence that they did their best to advance the Chinese agenda as a counter-weight to colonialism.  Thus, India was one of the first countries to recognize Mao’s China, and vocally conceded the permanent seat on the Security Council to China.

There is further circumstantial reasoning that Krishna Menon was a communist, and inasmuch as he was singlehandedly held responsible for India’s debacle in 1962, could have been the high-profile secret mole of China[2],[3].  Thus, Krishna Menon probably did all he could – and succeeded — to advance the agenda of China against India.  It is absolutely shameful that there still is a Krishna Menon Marg in New Delhi, and even more so that the present defense minister lives on that road. A further insult to the nation is to have his statue outside the hallowed South Block!! Recently people toppled the statue of a notorious slave trader, Edward Colston in Bristol, England.

China is already inimical to India in every way possible.  Specifically, China has betrayed India on the following:

•  Obstructed India from a permanent seat on the UN Security Council

•  Frequently creates an incident on the border during high-profile visits between leaders of India and China.

•  Illegally occupied Tibet and calls the Indo-Tibetan border as the legal border between India and China.

Friends don’t behave like that with each other.  Hence, it is most difficult to trust a China that has overt expansionist designs.

Benefits to India of Recognizing Tibet

What would India lose by derecognizing Tibet as part of China? The answer: “nothing significant”. To answer this question in greater detail, let’s see what could stop as a result, and what the consequences could be:

•  China could decide to stop trade between the countries.  While that may hurt businessmen who spend on imports from China, the overall trade deficit for India would reduce by about $60 billion, which is huge.  Hence, the stoppage of trade will make India come out on top.  In fact, this would give an opportunity to India to make hundreds of small things, such as pharmaceutical ingredients.

•  India may lose on importing rare earths, but India has sufficient supplies of its own for now.  India would cease exports to Japan.

•  India would stop giving away its precious coal to China.  It is strange that while India exports coal to China, India imports coal from Australia.  I can’t understand the math here, and find it quite unbelievable that India entered into such contracts.  It can straight away be suspected that some government branch could be making money here, unscrupulously.  An investigation is warranted.  We all know the problems India has had with coal concessions.

•  India will be unable to import solar panels from China.  This is just as well, because India should make its own and stimulate its economy, even if more expensive.

•  China will be unable to dump cheap steel on India.

•  Children’s toys, handicrafts, cheap textiles will cease to be imported from China.  This would be a boon to local handicraft industries, handlooms, and textiles.  In fact, the small business sectors here are crying out to stop this trade with China.

•  China will fail to receive vital food products from India.  This will be no loss to the Indian food industry that will simply sell to the local industry and step up exports to Myanmar and Thailand.  The local food prices will come down, thereby assisting to curb deflation, especially for the poor people of India.

•  The border would be sealed tighter.  This will eliminate or reduce suspected corruption among the customs and excise tax department, whose officers commonly have a reputation for corruption.  Furthermore, a sealed border will reduce the number of Chinese spies who enter India openly and without check.

•  Chinese investments in Indian stock market and economy would reduce.  This would be great for India because China is hoping to influence India by seeking to make deep inroads into India’s economy.  What they may not be able to win by war, they’d win by turning the screws on the Indian economy.  Look how China has managed to capture Greece, Italy, Sri Lanka, Djibouti, Zimbabwe, Angola, and many other countries by their debt and economic traps.

I think these are enough points raised for the argument.  Others may find additional arguments for why closing business with China would actually be a blessing for India.

Why not Recognize Taiwan, as Well?

A corollary to the question of the title is “what would happen if India recognized Taiwan?”  After all, Indian merchants have long done business in Taiwan, largely in textiles.  The answer is nothing more than what would happen if India derecognized Tibet as part of China.  Moreover, India’s lead on these two items – recognizing Tibet as independent and recognizing Taiwan – will likely spur other countries to do likewise.  It would spell the beginning of cutting China down to size, and bringing it back to reality.  Moreover, some of the trade lost with China would be picked up by other, new friends that India would gain.

Be Afraid only of Fear

There is nothing to be scared of.   For instance, China is unlikely to launch a war against India for these steps, though it will definitely threaten India.  However, the dog that barks the most often feels weak.  China may use all rhetoric and innuendo to frighten India, but India needn’t budge.  After a bit, China will get used to the new reality, especially when other countries follow in India’s footsteps.

However, if China does start a war, India can hold its own.  This is not to mention that major countries will come to back India in material, military, and economic ways.  China will never launch a nuclear war against India because it goes against their rational nuclear policy.

A part of the problem for recognition of Tibet as independent is the Dalai Lama himself.  He is himself scared that upsetting China will make China come down harder on Tibetans.  This sounds quite fearful, though it may be an acquired fear.  Which leader would leave his own country at the mercy of the enemies just for the sake of learning more about mechanical gadgets from the rest of the world?[4]  He could have learned of them by bringing technology to his country.  But, he never appealed for help and never sought to arm his country.  But, the Dalai Lama, as a so-known divine personality, could have known better.  Regrettably, he did not turn out to be an astute politician, but led his people to poverty. This is quite difficult to respect.[5]  All said, his actions and lack of actions resulted in a big problem for India.

Of course, there are others to blame as well, such as Nehru who ignored Sardar Patel’s plea of intervening in Tibet, but that does not mean that the Dalai Lama can be exempt from the blame.

But the Indian Politicians are Scared

As much as we should only fear fear itself, our Indian politicians tremble with fear for the most part at the thought of a vengeful China. The Indian politicians have themselves a bad reputation on this count.  Imagine how Vajpayee signed away Tibet for a Sikkim.  Did he never see a map to compare sizes?  Manmohan Singh repeated the same.  And remember, fear causes half the battle to be lost, for it takes away reasoned thinking, for one.Why would successive Indian PMs capitulate if not for fear?  I also regret to say that many Indian Generals are against getting tough on China because they fear the results, though fear is unfounded for anyone who wishes to look deeply into the problem, while a war is even less likely, though I read with admiration Gen Padmanabhan’s book on a possible war and victory over China[6].  To hold oneself sovereign, one has to be brave: the recreants fall and die before their death and take their country with them.

We’ve said this time and time again: the main problem with China is its communist and expansionist ideology.  Without the threat that China is to its neighbors or other countries in the world via its aggressive posturing, economy capture, and debt traps, China would be quite a nice country.

[5] See the movie, “The Sun Behind the Clouds; Tibet’s Struggle for Freedom”, where voices ask for a revision in the Dalai Lama’s policy.

35 thoughts on “What will happen if India recognizes Tibet?”