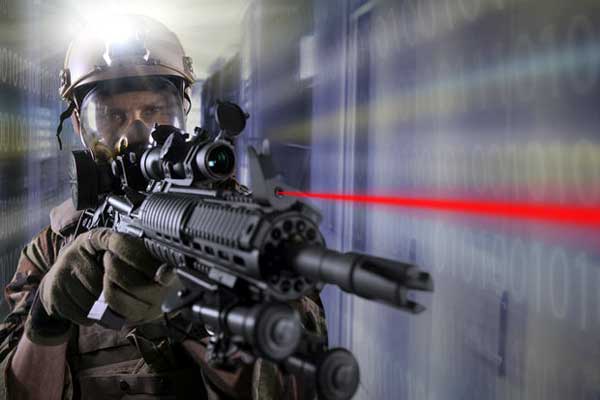 China announced in July 2018 it had developed the ZKZM-500 laser gun that can destroy a target 800 meters away by charring skin and human tissue, the frequency of the laser making it invisible to the human eye. It is noiseless and is powered by a rechargeable lithium battery with capability to shoot more than 1,000 shots per charge. Reports said that the ZKZM-500 laser gun was ready for mass production and the first units are likely to be given to anti-terrorism squads in the People’s Armed Police. Videos of this portable laser gun were posted on the internet.

The advantage of such weapon is that it is impossible to decipher where the attack came from. Aside from targeting individuals they would be highly effective against fuel tanks, fuel carrying vehicles on the move and de-capacitating radars and mobile towers.  Subsequent reports confirmed China has equipped police units with the ZKZM-500 laser guns.

With China arming its Police with the ZKZM-500 laser gun, it was opined in these columns that these could be passed on to Pakistan, and that their employment against India at least astride the LoC and IB should not be discounted (http://www.indiandefencereview.com/news/sniper-rifles-with-jk-terrorists/). There are some recent unconfirmed reports that Pakistan is conducting trials of a robot tank close to the Punjab border. Not only did China demonstrate its indigenous robot tank in 2018 but has been converting old Soviet-era tanks (ZTZ-59) into robot tanks, as part of its army of robots.

If reports of the trial of robot tank close to Punjab border are true, China could be demonstrating the technology for joint development of robot tanks within Pakistan and / or help Pakistan help convert its vintage tanks into autonomous vehicles.

Chances of China-supported Pakistan deploying laser weapons against India are more because of their deniability factor. Hostilities against India are continuing not only through unprovoked cross-border firing and shelling, but terror incidents in J&K through Pakistan sponsored and supported elements too are occurring periodically. Pakistan attributes the mounting pressure from FATF to curb terrorists and terrorist financing, to India’s campaign for isolating Pakistan and “politicizing” the issue of Pakistani terrorism.

Indian airstrikes at Balakot is another sore point, because of which Pakistan is smarting. Pakistani RPG detachments during the 1999 Kargil Conflict were equipped with chemical rounds and the detachment itself with gas masks, even as India downplayed chemical casualties suffered. Recent foreign media reports confirm Pakistan is using chemical weapons against Pashtuns – their own citizens. So why would Pakistan not use laser weapons against India?

Another dimension of the increasing laser menace is unfolding in the South China Sea (SCS). Last month (June 2019) Australian amphibious ship HMAS ‘Canberra’ was transiting through SCS while travelling from Vietnam to Singapore. It was being trailed by a PLA Navy (PLAN) vessel, which is standard Chinese procedure because of their illegal claims to whole of SCS; afflicted with the chronic medieval belief in ‘Tian Xia’ – China believes everything under the sun belongs to it. But as HMS ‘Canberra’ was sailing through the SCS, several Chinese fishing boats fired lasers at the Australian helicopters. China’s boat or maritime militia is notorious for violent and intimidating acts in the SCS, but this is the first time they used lasers in the region.

Washington Times of April 12, 1999, had reported laser threat to allied pilots over Serbia, and the same newspaper reported on May 14, 2003, that North Korea had fired lasers at US troops. As for China, there have been similar incidents earlier with Chinese firing lasers at American pilots from the Chinese base in Djibouti. In May 2018, Pentagon reported that two pilots of a C-130 transport suffered eye injuries due to a military grade laser – there were between two and ten laser strikes on US aircraft. But China arming its boat militia with laser weapons adds to the deniability. Chinese boat militia operates in garb of fishing operations.

Recently, 10 Chinese fishing trawlers were caught by India fishing illegally off the coast of Maharashtra. Closing in with the Indian coastline without seeking permission from the Indian Coast Guard, indicates their dubious intentions. With presence the Chinese boat militia in the Indian Ocean, a new threat needs to be catered for, beyond monitoring and surveillance.

Many countries, including the US, Russia, China, UK and India have been developing lasers weapons. Concurrently, nations are also developing microwave, plasma, sonic and EMP weapons. But laser is a field where military applications are developed, fielded and being improved upon. Ground, sea and aerial laser weapon systems have already been fielded, in addition to hand-held laser assault rifles. The laser takes various forms, like electro laser, pulsed energy projectile, dazzler, and has many weaponized examples.

The significant advantage of laser weapons is that their range is much more compared to ballistic weapons with favourable atmospheric conditions and power level. Moreover, these will have limitless ammunition given sufficient power source.  Research is also ongoing for developing the ultrafast intense laser.

Studies in the west have highlighted concerns about the emerging threat of terrorists using laser weapons since militaries are transiting from conventional to directed energy weapons (DEWs), laser weapons offer tactical and operational advantages over conventional weapons, and laser prices are dropping while laser performance is increasing. Therefore, terrorists and militaries have been using laser devices and weapons for counter-optical purposes from laser pointers to man-portable laser-enabled air defence weapons. The significant part is that many of the youth-cells of terrorist organizations are tech-savvy, to whom and laser weaponry indoctrination comes from watching movies, playing CD-Rom games and conducting tactical simulations.

There has been discussion about that while terrorists may use laser, can the military target terrorists using lasers? The Geneva Conventions forbid the military to use eyes of individuals. However, the US Memorandum of Law of September 29, 1988, considered the legality of the use of a laser as an antipersonnel weapon, concluding that such use would not cause unnecessary suffering when compared to other wounding mechanisms to which a soldier might be exposed on the modern battlefield, and hence would not violate any international law obligation of the US, and hence, the use of antipersonnel laser weapons is lawful.

India is different cattle of fish. The furor over use of pellet guns in J&K is in public domain. But the DRDO had developed the ‘Laser Dazzler’ few years back for crowd control, which only blinds the target (s) ‘temporarily’. However, this non lethal anti-personnel laser device producing a highly intense laser radiation was never deployed in J&K against stone-pelting mobs for fear of media and human rights groups. Notwithstanding this, the policy makers need to examine the emerging threats from use of lasers by our adversaries and terrorists and strategies response, rather than wake up after being hit by lasers.

One thought on “Weaponized Laser – lethal and deniable”