Home  >  News  > Geopolitics  >  War with Pakistan is the only solution

War with Pakistan is the only solution 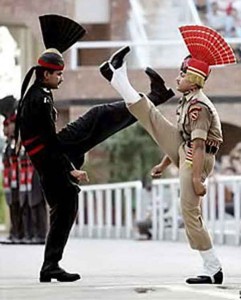 There are multiple reasons why Imran Khan would try to say what he did:

But, Imran’s philosophy is not the only one, and there are other perspectives that also want peace, albeit by a different path.

Note that India has cautiously been on its guard, knowing that Imran Khan is a puppet in the hands of the cunning military regime.  As such, India has refused to talk to Imran Khan, knowing fully well that talking has not yielded results these past 70 years.  India also knows full well the insincerity of the Pakistan junta – and that the junta will try to overcome India at every opportunity.  Their desire to defeat India is ingrained in the oath the officers take when commissioned: their enmity of India is inbuilt into their DNA.  No amount of wishful thinking on the part of India or South Block or India’s peace-loving people is going to change that[i].

Too many talks have gone on between India and Pakistan – and there is nothing left to talk about, anymore.  Pakistan has taken India for a ride time and time again.[ii]  Each time they talk, they agree to disagree.  And then they talk again somewhere else to agree to disagree.  And, this has gone on ad infinitum … with no tangible results.  Hence, it is a sign of madness to try the same thing over and over again that has not worked before.  Hence, talking is out – something else must substitute for it.  The only reasonable substitute is war.

In fact, Pakistan has talked and talked over the past 70 years – and each time has come back with a military adventure.  For four times, Pakistan has brought big military battles to India; and for countless times has tried to bleed India by thousands of cuts – an attack on Parliament, attack at railway stations, attack at police stations, attack at airport, and so on.  My only worry is that India is bleeding, though it may pretend to be fine.  Hence, it is time that India called a spade a spade and took Pakistan by the horns.  There must come a time when India must look after her own health.

No War has been Fought to Completion

Perhaps a sad story of the Indian sub-continent after partition has been that no war has been fought to completion, else the outcome may have been a perfect resolution.  The Kashmir war stalled because of British interference, and because the war was cut short by international threats, such that India decided for a cease-fire to allow a decision/resolution to be made by the UN.

The 1965 war was clearly stopped after both parties pleaded to Britain and USA to help stop the war.  That war was most certainly a draw, but had the war continued, some binding results would have shaped out.  For instance, India had captured the Haji Pir pass, and that put Azad Kashmir at risk.

The 1971 war on the Western front was clearly held back by pressure from Nixon and Kissinger – a team other than which has never been worse for India.  Nixon threatened to bring intervention to India’s doorstep and re-liberate Bangladesh if India would not return 93,000 prisoners and promise not to carry the war into West Pakistan.  So intense was the US pressure that even the Soviet Union balked, even though everyone knew that the USA was up to its eye-balls in Vietnam and could not afford another military adventure in India.  Everyone, except the ruling powers of India, who were much too beholden to the USSR.[iii]

The 1999 Kargil war never saw full completion because the USA (read Bill Clinton[iv])held back India’s hand to not cross the LOC, and bought Pakistan’s bluff of launching a nuclear war.  In fact, Clinton was scared of a nuclear war when no one in India was.

Thus, war has never been able to run its full course on the Indian sub-continent.  Next time, the stops must be pulled out.  But, it is already time, once again, to change the geopolitical boundaries in the world (i.e., in South Asia).  Tomorrow is as good a day as any other.

A Solution can be reached only by War

Talking will not change geopolitical boundaries; it will not bring about improved trade; it will not take away the distrust between the nations; it will not allow for free travel – and will not allow a solution to Kashmir to ever be advanced.[v]  Pakistan knows it is too weak to take over Kashmir – does not have the heart to lose it – or appear for its ego to not try to regain the full Kashmir – and so tries relentlessly to create all the havoc it can.  This is not to say that the record of Indian military and para-military in Kashmir has been puritan, but it is time to stop the bleeding.  The only way the bleeding can be stopped firmly is to take the battle deep into Pakistan and wrest Kashmir from Pakistan.

India has tried countless times to tackle terrorist activity in India that originates in Pakistan, but has failed to curb it.  The main trouble is that the terrorist holds the initiative, the element of surprise, can choose its target with advanced planning, and can plan an attack creatively and slyly.  That is why India has always been on the backfoot against these terror outfits.

All this stuff about arresting the big minds of terror activities, such as Hafiz Saeed, and trying to fight this case of violence in court – by talking — is simply the action of a weak Indian government who has the time to fight in courts, but does not have the courage to fight in battle.  This type of talking dissipates our energy in the worst way.   In contrast, winning a decisive war brings pride and confidence to the nation.

Any Day is Good for War with Pakistan

Moreover, any day is good for a fight with Pakistan – winter or summer – yesterday, today, or tomorrow.  It doesn’t matter who the US President is, who the Chinese President is, and what the Russian President feels.  Or what John Bolton thinks about the nukes.  India is much too large for that, and can dismantle the Pakistani Navy in three days flat, for starters.  That’s something to aim for to put Pakistan in its place once again.  This is before the ultimate war that dismembers Pakistan into an independent Baluchistan; an independent Sindh with foreign affairs and defence under the control of India; a FATA and NWFP of Pathan regions returned to its rightful owners, Afghanistan; a Kashmir restored to its last princely rulers and reunited with India; and a West Punjab that serves as a dependent state of India with limited rights, but with freedoms for its citizens.[vi]

It is time for our Pakistani brethren to come home to India – to trash the concept of religious intolerance – to be reunited with India for a strong South Asia that can make the world tremble – and which can give that bloody nose to a Chinese communist party that knows nothing about religious values or the freedom of the soul.

The wars of the future – such as the liberation of Tibet and Sinkiang – start with the neutralization of Pakistan and the nullification of the terror groups operating from Pakistan.

There is no better time for India to sharpen its weapons than now.  A renewed thrust is the call of the hour in weapon modernization, integrated commands, quick response teams, quadrupling of the special forces command, communication system development, indigenous nuclear submarine production… and all other applications of technology to the modern battlefield.  India cannot afford to drag its tail behind competing countries.  But, someone in India needs to have the vision to lead like that.

[iv]A deceitful person “who claimed he never inhaled … and never had sex with that woman”.

[v] Even today, all normal Indian visitors to Pakistan must report daily to a police station in Pakistan.

[vi] “Why the Existence of Pakistan is not in India’s Interest,” by Dr. Amarjit Singh, Indian Defence Review. Net edition, 19 June 2012.

47 thoughts on “War with Pakistan is the only solution”