War in Ukraine: Pax Americana was never absolute, now it will exist even less 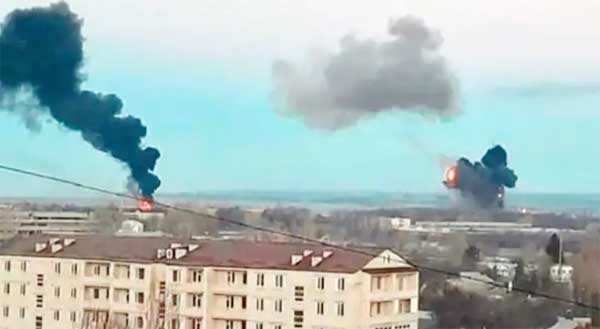 Pax Americana would mean peace and order and prosperous stability across the world under America’s hegemony. That never really existed in full and exists even less now.

Pax Americana ended substantially with the end of the phase of American unilateralism after the end of the Cold War. The period saw regime change policies to bring about a democratic transformation in West Asia either through armed force as in Iraq, Libya and Syria or the so-called “Arab Spring” in countries like Egypt.

As part of the universalisation of the democratic agenda and encouraging democratic change in Russia itself by setting an example of working democracies in former Soviet territories, “colour revolutions” were promoted in Georgia and Ukraine. This dynamics eventually led to military conflict between these two states and Russia, resulting in their losing territory as separatist Republics within their borders declared independence and obtained Russian recognition.

The US military intervention in Iraq ended in a fiasco, with the country moving into Iran’s orbit, wracked by terrorism, internal unity splintered with the effective separation of the Kurdish areas, and with the US eventually compelled to vacate the country. Libya too has seen power struggles, violence, warring factions and the absence of an effective central government. Regime change in Syria has been prevented by both Russian and Iranian military intervention, though the cost to Syria in terms of casualties, destruction of infrastructure, millions of refugees, the rise of the Islamic State, the occupation of northern Syria by Turkey etc. has been enormous. The failure of America’s military intervention in Afghanistan has been a disaster for its image and raised concerns about its defence commitments and reliability even amongst its allies.

President Trump expressed clearly a new vision of the US’ role in the world, of a more inward looking America, one unwilling to be a policeman of the world as before. He believed that America’s costly wars abroad had bled its economy and weakened the country. He was intent to withdraw from Afghanistan as part of reducing America’s defence burdens, expressed doubts publicly about the utility of NATO, hectored his European allies and Japan to do more for their own defence, and so on. He walked out of the Iran nuclear agreement as well as the Paris Climate Change agreement, which was seen as a retreat from multilateralism.

Trump signalled a retreat of the US power on the world stage, even if he increased defence spending and sought to build a stronger navy. He did, of course, chart a new course toward China, seeing it as America’s main adversary and initiated a more strong-armed political and economic policy approach toward that country.

The Limits of US Hard Power

Pax Americana rests on the two pillars of hard and soft power. The failure of American unilateralism exposed the limits of the US hard power. Today, the US admits publicly that it cannot alone uphold the international order it had largely established. It is rebuilding its alliances both in Europe and Asia with assurances of robustness of its defence commitments. Before the US-China meeting in Alaska in March 2021, the US announced that it had met its allies beforehand to signal to the Chinese that it was facing a consolidated front of the US and its allies. This was in itself an acknowledgement of a change in the balance of power between the two powers. In the event, the Chinese were not impressed and talked down at the US, conveying bluntly that the US no longer had the strength to impose its will on China.

China is now openly challenging the US power in Asia as well as in other parts of the globe. Its position as the world’s second largest economy, the biggest exporting country, controlling critical supply chains, taking a lead in many technology areas such as the digital revolution is at the cost of America’s long standing pre-eminence. The Belt and Road Initiative is the largest project of building infrastructure across the globe, unmatched by any other. China is creating alternatives to the World bank and the Asian Development Bank by establishing the Asian Infrastructure Investment Bank. It is now the second biggest donor to the UN where it occupies the top position in several UN organisations. It has shown the ability to muster support of many countries against the US moves to hold it to account at the UN Human Rights Council on the Uighur issue, including key Islamic countries. Even in the case of the UN Security Council meeting on Ukraine to condemn Russia, the US had to make major concessions to it to obtain its abstention. China is America’s biggest economic partner and the economic dependency that has arisen between the two limits the US options in dealing with Beijing.

The crisis in Ukraine also shows the limits of its hard power, in that the US could not prevent Russian military action against Ukraine despite the threat of the most severe sanctions on Moscow. Even as the US kept warning of an impending Russian invasion, it also announced that it would not itself militarily intervene in the conflict. Europe has been persuaded to join the US with its own sanctions of equally unprecedented severity. The NATO alliance has been reinvigorated in the face of the Russian challenge, announcements of military aid to Ukraine have been made, especially Germany’s decision to send arms.

While this shoring up of NATO under the US leadership gives a boost to American power, the consequences of this are not clear yet in terms of US-European ties in the future. For the moment Europe has come under revived American tutelage, especially in bringing to heel the Germans and scotching the French search for more strategic autonomy for Europe. The contradictions between the US and European interests, however, cannot simply disappear and will re-surface once the current crisis is over. The political, economic and security costs to Europe in a prolonged confrontation with Russia are much higher for Europe than for the US, as the locus of conflict is on European soil and not the US. The concerns in Europe over divisions within America, the inward-looking trends in the country, the potential return of Republicans to power that may once again change America’s course are not going to get dissipated so quickly.

Pax Americana continues to have strong pillars in the financial domain because of the status of the dollar as the foremost reserve currency, control over all financial transactions in dollars across the world, the crippling sanctions it can impose, as seen in the case of Iran and now against Russia, the extra-territorial scope of its sanctions that has affected India too. But this instrument in the US hands is getting blunted with countries transacting in currencies other than the US dollar or in their respective currencies, through swap arrangements and the like. Russia has moved most of its reserves out of the US treasury bills, for instance. Russia and India have taken recourse to a revived rupee-rouble payment system. Block chain technology can be used as an alternative to some extent.

The other pillar of soft power has been badly dented by the state of democracy in the US with contested presidential elections, the insurgency on Capitol Hill, denial of voting rights to sections of the population, deteriorating race relations signified by the BLM movement, police atrocities, gun killings in schools and universities, immigration control issues, and so on. On issue of democracy and human rights, the declared central pillars of the US foreign policy, the credibility of the US has been eroded.

President Biden’s State of the Union address acknowledges the internal problems the US faces on the health front, the need to rebuild the economy, the poor state of infrastructure in the country, the need to create jobs, control gun violence, address the drug addiction problem, the need to win economic competition with China, and so on. From the international point of view, his emphasis on buy American suggests a more protectionist America and any possibility of joining the Trans-Pacific Partnership to counter China’s economic domination of the Asia-Pacific region, especially with the RCEP agreement, is excluded.

The US President lambasted Russia in his address, encouraged Ukrainian resistance, listed the financial and technological sanctions against Russia that will make its financial reserves of $630 billion “worthless”, targeted the Russian oligarchs, noted that the Rouble and the Russian stock market had lost their value drastically, and so on. After declaring effectively an economic war against Russia, he stressed that the US forces will not fight with Russian forces in Ukraine. He is conscious that a direct conflict with Russia could lead to a nuclear war. He drew a red herring in stating that the US forces had been sent to Europe to defend NATO allies should Putin decide to move westwards, and that the US will defend every inch of NATO territory, even when it makes no sense for Russia to attack any NATO member and invite a potential nuclear holocaust.

Pax Americana would mean peace and order and prosperous stability across the world under America’s hegemony. That never really existed in full and exists even less now.

3 thoughts on “War in Ukraine: Pax Americana was never absolute, now it will exist even less”