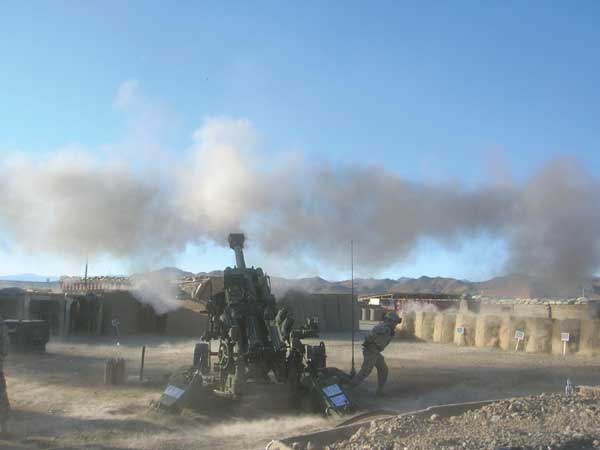 The Regiment of Artillery needs to expedite its modernisation process particularly with regard to guns and ammunition. All our guns are more than 25 years old and need to be replaced. The first platform likely to be inducted possibly would be the 155mm M777 Ultra Light Howitzer on a Foreign Military Sales Programme from the United States. These would be about 145 pieces which would enable about eight regiments. These guns would be an asset for the Mountain Strike Corps being raised shortly.

Artillery is a combat arm which has proved its worth in the four wars that India has fought as also the Kargil Conflict of 1999. Artillery has also maintained our ascendancy of fires across the Line of Control (LOC) and Actual Ground Position Line (AGPL). It spoke volumes when Pakistan undertook a unilateral cease fire in 2003 due to our accurate engagement of critical targets along the LOC. Yet we have to be prepared for a two-front war against China and Pakistan. It is indeed a difficult task particularly to provide firepower simultaneously on both the fronts. To undertake operations under such conditions, Artillery must be prepared to modernise and enhance its force structure to enable preponderance of firepower.

The task of the Artillery regiments would be to provide surveillance, leading to a judicious selection of targets, appropriate engagement of these targets and further undertake Post Strike Damage Assessment to confirm the state of the target and undertake further engagement to ensure destruction of the selected target. This would require surveillance and target acquisition equipment as also guns, mortars, rockets and missiles. It is pertinent to note that China and Pakistan are modernising their Artillery with state-of-the-art equipment. To match their capabilities we need to modernise our Artillery with speed and military precision.

Modernisation of Firepower in the Indian Context

China and Pakistan are leaving no stone unturned to modernise their armed forces. China has issued ten White Papers and professes peace. However, big nations have big ambitions and their intentions are unknown. Accordingly, India must be prepared to undertake operations in all five dimensions be it land, sea, air, cyber and outer space. Firepower has a place in all these dimensions and Artillery forms an important component of firepower, The Indian Army modernisation plan aims to develop prioritised capabilities through induction of high technology weapons and acquisition of force multipliers with a focus on creation of a lethal, agile and networked force to meet future security challenges.

Overall, despite multifarious views, India has to be prepared for a two-front war which could comprise cyber attacks, destruction of satellites, overwhelming use of firepower and multiple incursions. To strengthen our Army we need to modernise which entails induction of critical technologies. Therefore, there is a requirement to enhance capabilities across the spectrum to include the following:

Emphasis is also being given to make up deficiencies, upgrade existing platforms, improve infrastructure in border areas especially along the Sino-Indian border and focus on human development to harness cutting edge technologies. A new Defence Procurement Procedure (DPP) that has been formulated to expedite acquisition of equipment is to be issued shortly as per the Minister of Defence Manohar Parrikar.

The role of Artillery is to destroy/neutralise/suppress the enemy by synergised and orchestrated application of all fire assets at selected points of decision to physically and psychologically degrade enemy cohesion with the ultimate aim of breaking his will to fight. It is an arm which can attack the centres of gravity which impact the fighting capability of the enemy. To undertake the task, Artillery equipment is based on guns, rockets, missiles and surveillance and target acquisition equipment. The Artillery equipment would be based on the operational requirement of the Indian Army catering to threats in conjunction with terrain.

With regard to guns it would be to enhance the calibre and give the Indian Artillery a 155-mm (52-calibre) as the basic gun replacing the existing 105mm and 122mm field guns. This would provide enhanced range and greater throw off at the target end. There would be other variations which would comprise 155mm Self Propelled Track Regiments for the Armoured Divisions in desert terrain, 155mm Self Propelled Wheeled for mechanised forces in riverine terrain, 155m mm Mounted Gun System for the same force to operate in semi-desert terrain and the 155mm Ultra Light Howitzer for operating in mountains as also Out of Area Contingencies. In addition, there would be regiments of light artillery of 120mm with greater range and capability to move or be mule-packed based on the requirements of the terrain. Furthermore, the rocket regiments would be a mix of GRAD, Pinaka and Smerch units. There would be regiments equipped with the super-sonic cruise missile BrahMos which would be configured for all types of terrain. This merits attention as the Artillery has to be effective at high altitudes, in jungles and in deserts.

Surveillance forms a major component of the responsibility of Artillery regiments. Artillery needs to provide surveillance cover to formations operating all over the country. The Surveillance and Target Acquisition (SATA) Regiments would be scaled at the Corps level and SATA Batteries at the Division level. The surveillance philosophy will guide the future sensor profile of these regiments. Surveillance will focus on battlefield transparency with emphasis on depth battle. Furthermore, it must be disseminated in near real time.

Modernisation of Artillery equipment would have to be a systematic process…

The essential surveillance equipment would comprise:

The composition of Artillery equipment has been planned up to 2027 which would be the culminating year of the 14th Five Year Plan. It would enable the Regiment to build its capabilities systematically over a defined period.

Modernisation of Artillery equipment would have to be a systematic process. Indian Artillery is currently in a Network Centric Warfare (NCW) environment and has to provide Surveillance and Reconnaissance resulting in target acquisition which would lead to engagement which needs to be monitored to undertake Post Strike Damage Assessment and ensure that the target is destroyed. In NCW, Artillery shapes the battlefield, degrades enemy’s war waging capability, destroys his field defences, communication sites, logistics echelons thereby paralysing him and thus accomplishing our mission.

The Artillery Regiment is currently equipped with a variety of surveillance devices, guns, mortars, rockets and missiles. The surveillance devices are a part of the Surveillance and Target Acquisition (SATA) Regiments which consist of four types of Unmanned Aerial Vehicles (UAVs). These are the Medium Altitude Long Endurance (MALE), Heron UAV and Short Range UAVs Searcher MK I, Searcher Mk II as also four indigenously built Nishant. These UAVs have been operationally optimised and are an extremely useful tool for surveillance. Our current holdings are minimal and their numbers need to be enhanced. The DRDO is currently developing a MALE UAV Rustom which will possibly be inducted in the near future.

The SATA units are currently equipped with Medium Range Battlefield Surveillance Radars (MBFSR) and Weapon Locating Radars (WLR). The MBFSR currently held is the ELM 2140 which is able to detect tanks, vehicles and troops. They are held in minimal quantities and been exploited by mobile masts. The WLR currently held is the ANTPQ-37 which has been optimised with a reasonable degree of success. Furthermore, SATA units are equipped with Long Range Reconnaissance and Observation System (LORROS). This equipment has excellent day and night surveillance capability and has proved its effectiveness in operational areas. The SATA units also have a passive weapons locating system known as Sound Ranging. The system currently held is old and needs to be replaced by state-of-the-art equipment. Bharat Electronics in conjunction with DRDO has developed a Weapon Locating Radar which is undergoing evaluation of trials.

Apart from this, the Regiment hold a variety of ammunition to include High Explosive, Smoke, Illuminating, Cargo, Kransopol Precision Guided Munition (PGM), Terminally Guided Sub-Munition and Fuel Air Explosives. While the surveillance equipment, rockets and missiles are modern, the guns and ammunition are reaching obsolescence and need to be replaced at the earliest. The Regiment has started the process of inducting Artillery Combat Command and Control System for state-of-the-art communications between the Observation Post and Guns.