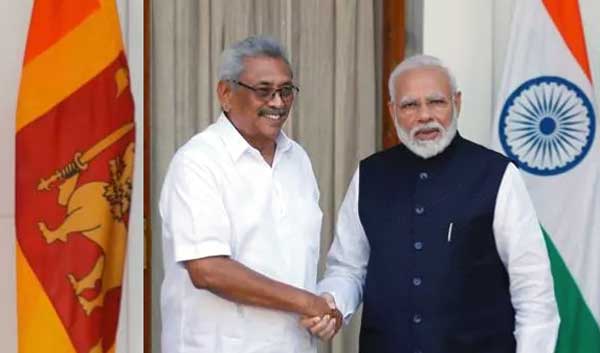 Sri Lanka President Gotabaya Rajapaksa’s two-day state visit to India commencing November 29, his first foreign visit after assuming presidency, has signaled a new beginning, contours of which will unfold in coming months. External Affairs Minister EAM S Jaishankar flying to Colombo immediately after Gotabaya’s victory on November 18 to personally meet him and extend formal invitation on behalf of Prime Minister Narendra Modi to visit India was an excellent diplomatic initiative. Before leaving for India, Gotabaya tweeted, “Leaving for my first state visit to India and looking forward and looking forward to strengthening bilateral relations with Shri Narendra Modi and Govt of India.”

…Gotabaya has made it quite clear that he wants investments, and unless other countries fulfill Colombo’s need, it would be difficult to resist China’s offers. Therefore, India’s economic engagement with Sri Lanka must be given top priority.

Gotabaya won the presidency with 52 percent votes in wake of the Easter Sunday bombings with Rajapaksa brothers accusing the Sirisena government for ignoring Indian intelligence reports warning that terror strikes by ISIS-motivated Islamic radicals were imminent. At the same time, Gotabaya’s win has caused serious misgivings amongst Tamil and Muslim minorities in Sri Lanka. Sri Lanka has a crucial role in the security of the sea lanes of the Indian Ocean and Chinese influence remains cause of concern with the Rajapaksa brothers widely regarded pro-China.

Mahinda Rajapaksa permitted Chinese submarines to berth in Colombo while Gotabay was in the defence ministry. Hambantota port landed in Beijing’s lap for 99 years having been awarded USD 1.4 billion land reclamation, Colombo Port project being part of Beijing’s Belt and Road Initiative, to China Harbour Engineering Company, which had a detrimental impact on India’s national security. Mahinda Rajapaksa is now appointed Prime Minister with defence, finance and trade portfolios which Beijing would love to exploit.

However in a recent interview to Indian media Gotabaya has significantly stressed that the 99-year lease (of Hambantota) may impact Sri Lanka’s future and the government must retain “control of all strategically important projects like Hambantota. After all, these are not like hotel or a terminal, but to give control of a port or an airport or our harbours is different.”

During his visit to India, President Gotabaya had wide ranging talks with PM Modi covering the entire expanse of bilateral ties. Modi said that a stable Sri Lanka was interest of India and the entire Indian Ocean Region. With respect to Tamils in Sri Lanka, Modi said he was confident President Gotabaya Rajapaksa’s government would fulfill aspirations of the community.

Counter terrorism was high on agenda of the two leaders with both discussing mutual security and further strengthening cooperation against terrorism. With Sri Lankan police officers already receiving counter-terrorism training in India, Incidentally the 7th edition of Exercise ‘Mitra Shakti- 2019’ aimed at enhancing interoperability and operational efficiency between the armies of India and Sri Lanka when deployed as part of UN peacekeeping forces commenced at Aundh in Pune in on December 2.

In the ‘new beginning’ of India-Sri Lanka relations, President Gotabaya Rajapaksa reportedly told PM Modi that no “third force” (apparent reference to China) will be allowed to impede the progress in bilateral relations…

It may be recalled that India had also earlier given financial assistance to Sri Lanka and assured to build houses under the India Housing Project for the Tamil community in Sri Lanka. So far, 46,000 houses have been built under this housing project started by the Government of India. Now an additional 14,000 houses are being built for people of Tamil origin. Apart from this, India has also decided to give a loan of USD 100 million for the solar projects in Sri Lanka. Gotabaya announced steps to hand back all the Indian boats in Sri Lanka’s possession to India.

In the ‘new beginning’ of India-Sri Lanka relations, President Gotabaya Rajapaksa reportedly told PM Modi that no “third force” (apparent reference to China) will be allowed to impede the progress in bilateral relations between India and Sri Lanka. Significantly, this has been mirrored in the statement made by Prime Minister and former President Mahinda Rajapaksa that he would work with his Indian counterpart Narendra Modi for peace and prosperity for both countries and the region.

Gotabaya said, “During my tenure as President, I want to take Sri Lanka-India relationship to a higher level. The two countries have a long-standing friendship. We need to work together for economic development and security of our people.” Gotabaya no doubt is decisive going by his credentials but to what extent he will be able to renegotiate the 99 years lease to China, if at all, only time will tell. President Rodrigo Duterte of Philippines too had taken a tough stance against Beijing but ended up falling to Chinese machinations.

Sri Lanka’s submission to China was under shadow of the western pressure of human rights violations of massacring some 40,000 Tamils and China’s economic clout. India is crucial to assuaging Tamil sentiments in Sri Lanka and the bubble of China’s economic prowess appears bursting with no one but three Chinese banks going bust – one to the tune of USD 40 trillion. Gotabaya, therefore, can stand up to China, especially after exposure of how China has literally subsumed Australia; it is now quite evident that collapse of Chinese economy will also severely impact Australian economy.

Inability of countries to repay loans for Chinese construction of roads, bridges, ports, mines, dams and other projects, to take over control of them is part of the ‘Debt Trap’ policy of Beijing across Asia and Africa.

The massive Chinese involvement in construction projects in Colombo is prominently visible today, as also are the business ventures in Kandy and elsewhere. Inability of countries to repay loans for Chinese construction of roads, bridges, ports, mines, dams and other projects, to take over control of them is part of the ‘Debt Trap’ policy of Beijing across Asia and Africa.

Concurrent to Gotabaya’s electoral victory, a USD67 million hospital specializing in kidney-related diseases gifted by China was rising in Polannaruwa, Sri Lanka with the perimeter walls adorned with pictures of China’s president Xi Jinping and Prime Minister Li Keqiang along with Sri Lankan leaders hailing Beijing’s gift. Chinese mega-projects have already added to rising debt of Sri Lanka and raised concerns about excessive economic and political leverage. Water plants and a Chinese radio station promoting its economic and social programs are part of the campaign to win over doubters.

China has invested an estimated USD11 billion in Sri Lanka, around USD8 billion in the form of loans related to Xi’s BRI initiative to boost trade and transport links across Asia. Chinese firms, employing thousands of local workers, have built a giant port and plan to construct power stations and expressways as well. China’s charm offensive is running full steam. Gitabaya’s visit to China should provide indicators of how Beijing plans to deal with Sri Lanka – something which will need to be read between the lines.

Given the state of Sri Lanka’s economy, Gotabaya has made it quite clear that he wants investments, and unless other countries fulfill Colombo’s need, it would be difficult to resist China’s offers. Therefore, India’s economic engagement with Sri Lanka must be given top priority.

India must continue with its policy of goodwill towards Sri Lanka. Importantly, India must: deliver quality projects in time; boost investments in Sri lanka including by private corporates; accelerate joint India-Japan agreement for developing  the East Container Terminal at Colombo harbour; negotiate finalization of earlier offer to operate the Mattala Airport, and; garner US and other countries support for investing in Sri Lanka and provide alternative to China’s BRI. India-Sri Lanka relations are important for the geostrategic environment of the Indian Ocean Region. Both countries need to nurture them well.

One thought on “Visit of President Gotabaya – new beginning”