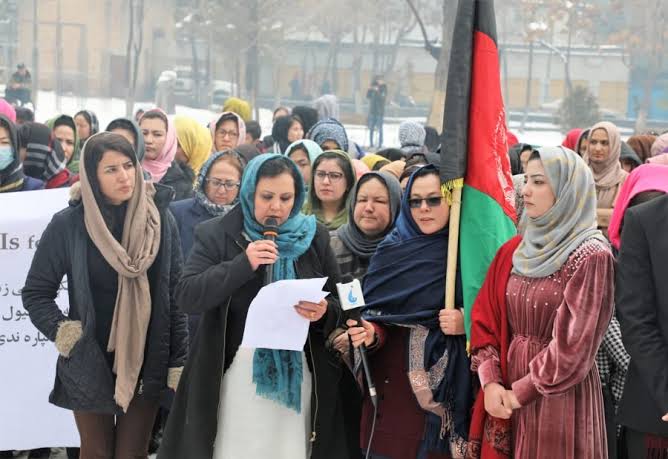 Afghan women are continuously attributing their stand on a strong foothold even though imbalanced societal norms since the Taliban era have discarded their rights throughout the millennia. Afghan Women’s contribution and talent have been unnoticed, yet their impressive scale of amelioration is presumably significant. Having a profound capacity to perform intrinsically, Afghan women are emerging on the pillars of reforms. The plight of women in Afghanistan is much spoken about; however, it is important to take a comprehensive view of their transformational approach. The International Women’s Day which is celebrated on the 8th of March every year for the social, economic, cultural and political achievements of women – across all the countries including Afghanistan glorifies women’s triumphant endeavours and posits their credible courage, resilience, strength, and ingenuity.

Women’s Day has been marked as a major event in Afghanistan since the fall of the Taliban regime in 2001. The societal narrowed ideologies cast immense dismay in the life of Afghan women with continued turbulence.  In the on-going US-brokered peace process negotiations between the Afghan Government and Taliban, the role of Afghan women’s participation is negligible yet prominent as they negotiated with the Taliban meticulously. Deborah Lyons, the Secretary-General’s Special Representative for Afghanistan, stated that ‘The peace process has brought to the fore strong Afghan women leaders, who have negotiated on behalf of the Islamic Republic of Afghanistan and rallied support in their communities for a peaceful solution to the conflict. Empowering these women, and expanding women’s participation, will be critical to ensure a just and sustainable peace that protects the rights of all Afghans. The role of Afghan women is pivotal for an inclusive peace process. Peace and status of women co-relate to each other and an inter-dependent factor in analysing the actual status of women in a democratic peace process.

Since the overthrow of the Taliban regime in 2001 Afghan women have taken noteworthy steps in improving their status, however, the multi-dimensional social aspect is missing to create progressive opportunities for themselves. With the on-going peace process, women’s meaningful participation is not only in power-sharing but holding the responsibilities in decision making for a democratic peace process for the sovereignty of their nation.

The 2021 International Women of Courage Awards were given posthumously to seven Afghan women who were assassinated in 2020 while serving their communities. This achievement spells different narratives of Afghanistan especially the women, their accomplishments to create a perfect springboard for securing a dignified place in the society, despite a troubled history of Taliban’s suppression upending women’s freedom.

The emblematic work of Somaya Faruqi, 17 is praiseworthy who led Afghanistan’s Girl’s Robotics Team as they developed a prototype ventilator to support their country’s health care system during the COVID pandemic crisis. The story of Somaya Faruqiis an inspiration for her heroic assertion.  Looking at the history of oppression of women in Afghanistan, we also see their intellectual spirit and achievements that inspire many and society needs to recognise their contribution and show the necessary agility to support them.

Present-day 25 per cent of the student populations in various higher education institutions are women. Notably, Afghan women’s exemplary effort can’t be dissipated. The most prominent among them are Afghan women who are making tremendous strides to be self-reliant. More than 6,000 women serve as judges, prosecutors, defence attorneys, police and army personnel. Government data counts about 10,000 women among the country’s doctors, nurses and health professionals. There are around 1,070 women journalist’s in Afghanistan. Some 1,150 women entrepreneurs have invested $77 million in their businesses, providing job opportunities for 77,000 Afghan women and men.

Resolution 1325 calls for women’s wider inclusion in peace processes and for gender perspectives to be incorporated in all UN peace and security efforts. According to Dr Adam Lupel, Vice President of the International Peace Institute, “Women’s substantive involvement in peace processes increases their potential for success and durability because if women meaningfully participate, peace processes are less likely to be simply a negotiation about power among men with guns, and more likely to include broader issues about how to build a sustainable, peaceful society”.

Gender inequality and violence against women in Afghanistan remains an elusive issue as the recognition crisis exists since the Taliban era. It is intrinsically sceptical to say whether democratic governance and peace ensure reforms vis-à-vis the status of the women.

The signing of the peace deal in February last year between the US and the Taliban revived hope for intra-Afghan dialogue negotiations between the Afghan government and the Taliban, a 21-member delegation for the talks was put forward by the government – only five were women. This approach is fraught by the ignorance of women’s meaningful participation in the peace process. As per the Oxfam report, nearly eighty per cent of Afghanistan’s past peace meetings since 2005 have put women off the radar in the peace process. The review report by Oxfam also highlighted a total of 67 exploratory meetings, formal and Informal negotiations and internationally-backed consultations between 2005 and 2020, and found that women were present on only 15 occasions (22%).

The Kabul Process declaration of 2018 stated that ‘women’s full and meaningful participation in reconciliation should be a foundation of any lasting peace. The High Peace Council established in 2010 by former Afghan President Hamid Karzai, the HPC’s mandate was to engage with the Taliban and prepare for a formal peace process. It included women, but the participation remained low. The Tashkent Conference declarations stressed the ‘importance of women’s full and meaningful participation in Afghan reconciliation, security and economy’. In February 2019, Around 3,000 women participated in the National Women’s Consensus for Peace to reiterate their demand for meaningful participation in any upcoming peace negotiation. On 2 April 2019, A National Civil Society and Media Conference on Peace Negotiations held in Kabul, organized by the Salah Peace Consortium and attended by President Ghani and Chief Executive Abdullah. About 400 Afghan men and women attend from across Afghanistan. The 19-Point Joint Declaration states ‘women per cent rise 40 to 50 per cent of any peace negotiation team’.

According to Fawzia Koofi, an Afghan politician and women’s rights activist stated Taliban’s stance and said, ‘they care about the role of women within an Islamic system and within the framework of Afghan traditions’. This is indicating fierce restrictions to be imposed under the Taliban. The recent announcement of the Ministry of Education of Afghanistan, barring girls above the age of 12 from singing the national anthem in public has sparked outraged in various social media platforms; however, the decision has retreated. Taliban’s dormant attitude for women’s rights in a peace deal is a subtle signal in giving a prominent role to women. Highlighting a recent study conducted by UN Women, only 15 per cent of the men opined that women should be permitted to work outside their home.

Afghanistan’s history of suppression, violence and gender inequality has marginalised the status of women since the Taliban regime. The report, In search of justice for crimes of violence against women and girls, examined 303 reports of crimes between September 2018 and February 2020 and found that only half of them reached a court, and impunity remained prevalent. Women and children comprised over 44 per cent of all civilian casualties. Afghan women have been subjected to extreme violence in their daily lives. Access to justice has remained a bleak hope as they continue to remain vulnerable because of deeply entrenched social biases. For decades Afghan women have been suffering from a faltering fate. Conflict affects women more destructively. The road-map to peace in Afghanistan must provide a substantial status to women.

To develop necessary policies for women empowerment in Afghanistan the post-Taliban constitution pave the way to build women’s space in the advancement in exercising their rights. However, women empowerment initiatives are often backlashed due to the patriarchal male-dominated society’s thought process. The Afghanistan Government holistic approach has developed cohesive policies to address gender equality issues. The government with support from international communities has set-up the Women’s Economic Empowerment Program (WEEP), the National Action Plan on UN Security Council Resolution 1325 (NAP 1325), National Action Plan for the women of Afghanistan (NAPWA).

The implementation in supporting the plan of action has catapulted Afghan women’s socio-economic status. The most prominent one to discuss is the health care system that was dwindled during the Taliban regime without a health care facility for women. The Afghan Government has constructed 3,135 functional health facilities by 2018, giving 87 per cent of Afghan people access to a medical facility. The literacy rate of girls and women over 15 remains about 30%. In 2020, 21 per cent of Afghan civil servants were women, 16 per cent of them in senior management levels; and 27 per cent of Afghan members of parliament were women.

Women occupy positions in the national and provincial councils, as well as in the national assembly and courts. The promulgation of the law on the Elimination of Violence against Women (EVAW) in 2009 ignited hopes in improving the status of women, however, it did not produce impressive results.

The role of the international community is of paramount importance and significantly need to set the benchmark in the restoration of women’s rights in the on-going peace process. Taliban’s cold and dormant response towards women’s participation is signallingtheir irresponsive attitude in recognizing women’s rights. Most women in Afghanistan fear that the power-sharing government with the Taliban is likely to curtail their basic rights. The US and the regional countries must set guidelines in the peace process to give the due recognition and status quo to Afghan women, especially before the pull-out of US forces.

Women empowerment is one of the progressive moves in magnifying the role of women in state-building, more importantly, in the peace process and development of civil society. The role of Afghan women is envisioned through the prism of development, improvement and significantly achieving sustainable goals for better livelihood creation. The women in Afghanistan seemingly are driving a wedge between suppression led by the Taliban regime, yet their undaunted spirit is much appreciable at unprecedented levels.

The democratic peace process can only grow with women’s active participation in all the spheres including social, political and economic. In spite troubled history of Afghan women’s suppression and the downfall of the Taliban, they have put tremendous effort to improve their status in society on all fronts. Afghan women have been putting efforts to secure their status bringing to light the possibilities women can create in enhancing the country’s growth for nation-building and the peace process. Afghanistan is set on the journey for a sustainable peace deal and the participation and securing equal rights to women in the peace process for nation-building is an important element to engineer transformation.

The confidence has been lit up with their initiatives as they empower themselves.  The first lady of Afghanistan, Rula Ghani said, that Afghan women have realized that they could preserve their achievements only under the republic system in the country. The strengths and potential of Afghan women and their achievements argue that when given a level-playing field, women undertake an important stand in achieving a lasting peace process.