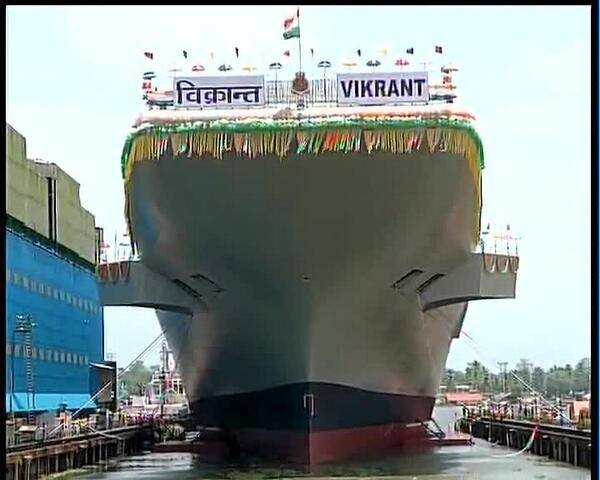 Antony said,“ Today’s launching of the IAC marks just the first step in a long journey, but at the same time, an important one.”

In a colourful ceremony filled with traditional pomp and fervour at the Cochin Shipyard Limited in Kochi, Smt Antony launched ‘Vikrant’ in the presence of Shri AK Antony, the Minister of Shipping, Shri GK Vasan, the Chief of Naval Staff Admiral DK Joshi, the F-O-C in C Western Naval Command Vice Admiral Shekhar Sinha, Commander-in-Chief Southern Naval Command Vice Admiral Satish Soni, Chairman and Managing Director, CSL, Commodore (Retd) K Subramaniam and other officials of the Ministry of Defence and Ministry of Shipping. In addition, a multitude of Naval officers, yard workers and a few members of the Steel Authority of India Limited (SAIL), the manufacturers of the indigenous warship grade steel, were also present.

At the launch, marking the end of Phase- I of the project, the imposing ramp of the 37,500 tonne Short Take off but Assisted Recovery (STOBAR) Carrier boasted the indigenous design and build capabilities of the country. The ship has attained its designed length of about 260 m and is almost at its maximum breadth of 60 m. The main landing strip is ready. Over 80% of the structure, containing about 2300 compartments has been fabricated, over 75% has been erected, all the major machinery, such as the two LM2500 Gas Turbines developing a total power of 80 MW, the diesel alternators capable of producing about 24 MW and the main gear box have been fitted. Soon after Vikrant floated perfectly upright, she was launched out into the Ernakulam Channel in a pontoon assisted precision manoeuvre. Vikrant was moved out of the building dock to be positioned in the refitting dock where the next Phase of outfitting will be completed.

Describing the occasion as a ‘momentous’ one, Shri Antony said,“ Today’s launching of the IAC marks just the first step in a long journey, but at the same time, an important one.” He said it was indeed a proud moment for the country to witness our efforts at achieving self-reliance in the field of warship design and construction, as only a very few advanced countries in the world possess the capability to design and build aircraft carriers.

The construction of the ship is a truly pan Indian effort with active participation of private and public enterprises.

Shri Antony said we must continue the process of strengthening indigenous capability towards securing our maritime interests. ‘Our Navy must continue to maintain high operational readiness at all times to ward off any likely misadventure against our national interests’, he said.

The Defence Minister urged the Indian industry to participate whole-heartedly in our shipbuilding programmes and further consolidate our strength in this field.

Speaking on the occasion, the Shipping Minister Shri GK Vasan said by launching this great warship which is one of the most important ships for the Indian Navy, Indian shipbuilding has demonstrated its technical capability and expertise.

The design and construction of the Indigenous Aircraft Carrier was sanctioned by the government in January 2003. The keel of the ship was laid on 28 Feb 2009 by Shri AK Antony. Vikrant marks a special feather in indigenous defence capabilities- this being the first ever aircraft carrier to be designed by the Directorate of Naval Design of the Indian Navy, the first warship to be built by Cochin Shipyard Limited and the first warship to be built entirely using indigenously produced steel. The construction of the ship is a truly pan Indian effort with active participation of private and public enterprises. The steel has come from SAIL’s plants in Raurkela in Orissa, Bokaro in Jharkand and Bhilai in Chattisgarh; the Main Switch Board, steering gear and water tight hatches have been manufactured by Larsen and Toubro in its plants in Mumbai and Talegaon; the high capacity air conditioning and refrigeration systems have been manufactured in Kirloskar’s plants in Pune; most pumps have been supplied by Best and Crompton, Chennai; Bharat Heavy Engineering Limited (BHEL) is supplying the Integrated Platform Management System (IPMS); the massive gear box is supplied by Elecon in Gujarat; the tens of thousands of electrical cable is supplied by Nicco industries in Kokatta; Kolkatta is also where the ship’s anchor chain cable is manufactured.

The ship will then undergo extensive trials before she is handed over to the Indian Navy by around 2016-17.

Vikrant will be capable of operating an aircraft mix of the Russian MiG-29K and LCA (Navy) fighters being developed indigenously by HAL. Its helicopter component will include the Kamov 31 and the indigenously developed ALH helicopters. The ship’s ability to sense and control a large air space around it will be enabled by modern C/D band Early Air Warning Radar, V/UHF Tactical Air Navigational and Direction Finding systems, jamming capabilities over the expected Electro Magnetic (EM) environment and Carrier Control Approach Radars to aid air operations. Long Range Surface to Air Missile (LR SAM) systems with Multi-Function Radar (MFR) and Close- In Weapon System (CIWS) will form the protective suite of the ship. All weapon systems onboard the carrier will be integrated through an indigenous Combat Management System (CMS), being manufactured by Tata Power systems. The ship’s integration with Navy’s Network Centric Operations will provide force multiplication.

Design of this prestigious ship has been undertaken by the Directorate of Naval Design (DND)of the Indian Navy. Created in 1956 as the Corps of Naval Constructors, to realise the dream of being a builder’s Navy through indigenisation, DND has successfully designed over 17 different classes of warships, to which around 90 ships have already been built within the country. The Delhi class destroyers, with a displacement of about 7000 tonnes, were the biggest warships designed by DND so far. Designing of the Vikrant, at almost 40,000 tonnes speaks of the maturing of the capabilities of DND and represents a feather in the cap of the designers particularly as it is the first aircraft carrier of its size in the world with some unique features such as Gas Turbine Propulsion.

The seamless hull and smooth lines of the ship stand as testimony to the high production standards of Cochin Shipyard Limited (CSL). CSL, a mini Ratna PSU, has earned a reputation for quality construction and timely delivery. Till now, CSL had the distinction of building the largest ship in India i.e., 93,500 tonne Aframax tankers. However, this complex integrated construction project enabled by a Rs 200 Crores infrastructure augmentation plan involving large cranes, workshops and heavy duty machinery has seen the shipyard maturing into a competent warship builder.

With the launch of IAC, ‘Vikrant’ the Indian Navy is well on its way to demonstrate its comfort with the practiced art of trapped landings and angled deck operations.

Vikrant will now enter the second phase of construction which will see the outfitting of the ship, fitment of various weapons and sensors, integration of the gigantic propulsion system and integration of the aircraft complex (with the assistance of M/s NDB of Russia). The ship will then undergo extensive trials before she is handed over to the Indian Navy by around 2016-17.

It may be recalled that at the time of attaining our Independence, our visionary leaders saw the centrality of a powerful Navy and set us on the right course by envisaging an aircraft carrier centred Indian Navy. INS Vikrant, India’s first aircraft carrier was acquired from Great Britain and commissioned on 04 Mar 1961. In its 36 years of glorious service INS Vikrant was at the centre of action in the 1971 operations for liberation of Bangladesh. Having seen many years of service as a CATOBAR (Catapult Assisted Take Off but Arrested Recovery) carrier working an angled deck and operating Sea Hawks, Alizes and Seakings, INS Vikrant was transformed into a STOVL carrier to operate Sea Harrier jump jets. INS Vikrant was decommissioned on 31 Jan 1997, after 36 years of glorious service under the Indian ensign. With the launch of IAC, ‘Vikrant’ the Indian Navy is well on its way to demonstrate its comfort with the practiced art of trapped landings and angled deck operations.