Vice Admiral DK Joshi will be the next Navy Chief 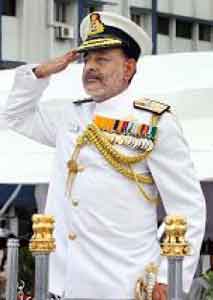 Vice Admiral Joshi was commissioned on April 01, 1974 in the Executive Branch of the Indian Navy. During his long and distinguished Service spanning nearly 38 years, he has served in a variety of Command, Staff and Instructional appointments. Vice Admiral Joshi`s Sea Command includes Guided Missile Corvette Kuthar, Guided Missile destroyer Ranvir and the Aircraft Carrier Viraat. Before taking over as FOC-in-C Western Naval Command, he has served as the Deputy Chief of Naval Staff, Commander- in-Chief of A&N Command (CINCAN) and the Chief of Integrated Defence Staff to Chairman, Chiefs of Staff Committee (CISC).

Vice Admiral Joshi is a distinguished graduate of the Naval War College, USA, an alumnus of the College of Naval Warfare, Mumbai and the prestigious National Defence College, New Delhi. He was Defence Advisor in the Indian High Commission at Singapore from 1996 to 1999.