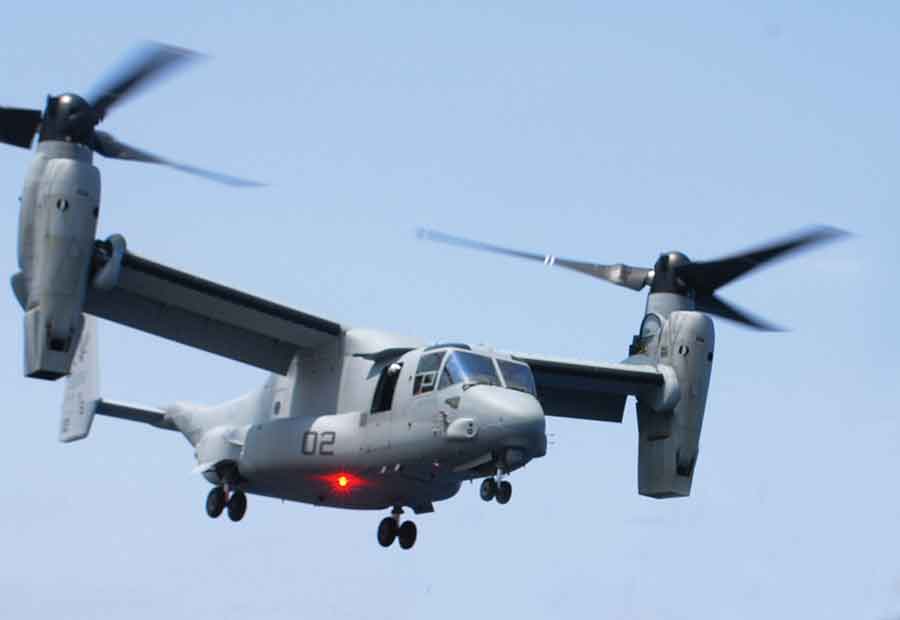 The Boeing V-22 Osprey is the only operational tilt-rotor aircraft that combines speed, payload capability and reach of a fixed-wing transport aircraft with hover-landing capability of a helicopter.

The V-22 Osprey combines speed, payload capability and the reach of a fixed-wing aircraft with the hover-landing capability of a helicopter…

In June 2009, CV-22s of the 8th Special Operations Squadron of the United States Air Force (USAF), delivered 20,000kg of supplies by way of humanitarian assistance to remote villages in the Honduras that were inaccessible by road. In 2010, a US military helicopter was wrecked during a raid in Afghanistan. Dozens of combatants, who were thus stranded, came under enemy mortar fire. When other helicopters were turned back by dust storms and the high peaks of the Hindu Kush, two CV-22 Ospreys flew the rescue mission over 800 miles, climbing to 15,000 feet to clear the mountains. These two aircraft were able to rescue in under four hours the 32 US personnel in the two helicopters that were shot down. A year later, in a combat CASEVAC mission, an F-15 pilot, who had crashed in Libya, was rescued by an MV-22 flying from an amphibious assault ship. The marines could return the pilot to the vessel 150 miles away in just about 30 minutes.

These missions clearly demonstrate the versatility of the Boeing V-22 Osprey, the only operational tilt-rotor aircraft that combines speed, payload capability and reach of a fixed-wing transport aircraft with the hover-landing capability of a helicopter. To examine the relevance of this platform to the Indian armed forces, it would be necessary to study its design features, safety aspects, its performance and the maintenance issues that impact its employment.

Aircraft designers had long dreamt of creating an aircraft that can fly long distances at high speeds, carrying heavy loads and at the same time, take-off, hover and land like a helicopter. Designed, developed and manufactured jointly by American companies Bell Helicopter and Boeing Rotorcraft Systems under Boeing Defense, Space and Security, the V-22 Osprey is one such machine. The rotors of the aircraft are folded and wings rotated for storage on an aircraft carrier. 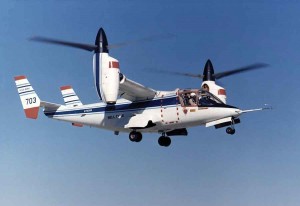 Bell developed the XV-15 tilt-rotor that was tested by NASA, in July 1979. The XV-15 became the first aircraft to tilt from helicopter to airplane and back. The success of the tests led to the expansion of the program, which was subsequently renamed the V-22 Osprey. While the Osprey is operational with the US Marine Corps (USMC), the US Navy and the USAF, Bell is also exploring possible civilian uses of this unique and versatile platform. The Osprey has two large, three-bladed lift-generating rotors turning in opposite directions eliminating the need for a tail rotor to provide directional stability as in a conventional helicopter.

Safety has not been much of a problem with the Osprey…

The wings on which the rotors are mounted can pivot thus changing the plane of the rotors to either provide lift to the platform and hover like a helicopter or provide forward thrust to fly like a conventional fixed-wing aeroplane. In other words, the rotors tilt through 90 degrees thus effecting transition from vertical flight to horizontal flight. The V-22 Osprey can transit smoothly from helicopter mode to airplane mode in just 12 seconds.

Each rotor is driven by an Allison AE 1107C turbo-shaft engine that is capable of producing over 6,000 horse power. Each engine drives its own rotor and transfers some power to a mid-wing gearbox that drives the tilting mechanism. In the event of an engine failure, the Osprey is capable of running with power from the remaining engine being distributed to the two rotors through an inter-connecting drive shaft. Depending upon the configuration, the Osprey can hold up to 13,779 litres of fuel. 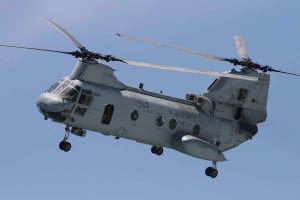 The Osprey has a three-man crew, a pilot, a co-pilot and a flight engineer. The cockpit has multi-functional displays, similar to the glass cockpit of the space shuttle. The displays provide information about the engines including oil pressure and temperature. It also provides readings of hydraulic pressure and fuel state. Interaction by the pilot and the co-pilot with the flight computer and the control columns to manoeuvre the aircraft in flight is achieved through keypads.

The Osprey can carry 24 troops or 9,072 kg of load that can be landed or be delivered by parachute. In addition, the Osprey has an external hook-and-winch system that allows it to carry 6,803 kg of cargo in tow.

The Osprey has been deployed in both combat and rescue operations over Iraq, Afghanistan and Libya…

In the Special Operations role, the Osprey is equipped with rear-facing guns for defence. Ospreys that operated in Iraq were equipped with M240G medium machine guns mounted on the rear ramp to clear the Landing Zones of enemy opposition.

The tragic crash in April 2012 of an MV-22 Osprey in Morocco that killed two marines, affected adversely the safety record of the Osprey. It earned a bad reputation during its development phase extending over 30 years. During this period, 30 marines are known to have perished in three accidents. In one of these accidents, which took place in Arizona in the year 2000, 19 marines were lost. Over the last ten years however, the accident rate on the V-22 has been about half the average for the entire marine aircraft fleet and it is currently the lowest of any rotorcraft in that fleet. These averages are adjusted to reflect time actually flown, so it really is a surprisingly safe aircraft, considering it only recently entered service.

After the manufacturers fixed the problems that led to mishaps during the development phase, the Osprey went into combat where its record is reported to be good. The US Marine Corps began crew training for the Osprey in 2000 and fielded it in 2007. Currently, it is supplementing and will eventually replace the fleet of CH-46 Sea Knights, the maritime version of the Chinook. 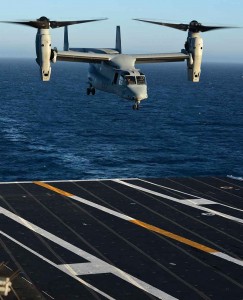 The other operator of the Osprey fleet, the USAF, fielded its version of the tilt-rotor in 2009. Since entering service with the USMC and the USAF, the Osprey has been deployed in both combat and rescue operations over Iraq, Afghanistan and Libya. This unique platform has logged more than 100,000 flight hours in some of the most inhospitable conditions imaginable with a safety record that is actually considered the best among Marine Corps rotorcraft. Overall, the program was doing well as the fleet of 214 aircraft has logged nearly 200,000 of flying hours in combat deployment.

There has been only one fatal crash since the aircraft entered into service with the USAF. In 2010, a USAF CV-22 was destroyed in a landing accident in Afghanistan killing four. Until recently, that was the only fatal accident on the aircraft in the past decade. In comparison, since 2001, six CH-46 Sea Knights have crashed killing 20. The detractors of this versatile machine need to view the Osprey’s performance more objectively. What then are the controversies surrounding this versatile machine?

When speed is of the essence the Osprey will, without doubt, score over the helicopter.

Can the Ospreys auto-rotate like a helicopter? When a helicopter’s engine fails, the rotors continue to turn driven by the column of air rushing upwards and past the rotor blades as the craft plummets towards the ground. By changing the blade angle of the wind milling rotor, the pilot can ensure that enough lift is generated by the rotor blades to make a controlled landing with a high degree of safety. Ospreys cannot perform such a manoeuvre which in technical parlance is known as auto-rotation. The V-22 has other ways to land in an emergency involving engine failure. This aircraft can take advantage of the lift of the props and wings to set down safely. Marine Corps pilots state that the Osprey is not a helicopter as it can glide at a forward speed of as low as 40 nautical miles per hour.

Rotorcraft that descend too quickly at low speeds can lose lift if the rotor dips too far into its own downwash. This is called Vortex Ring State (VRS). An Osprey in VRS can lose lift on one side and flip. This apparently was the cause behind the accident during the development phase in which 19 marines had died. Since then, Ospreys have been modified to have audio and visual warning of the onset of VRS. Pilots can tilt the rotors forward to regain control if the aircraft has enough altitude to manoeuvre.

What if an Osprey loses an engine? The coupling of each engine to the other gearbox enables one engine to drive both the rotors. Thus, in the event of a single engine failure, the pilot has a good chance to fly the aircraft with one of the engines shut down to land at the nearest airfield.