The Indian Strategic Forces Command (SFC) successfully test fired from a rail mobile system the nuclear capable Intermediate Range Ballistic Missile, the Agni II from Wheelers Island off the coast of Orissa. Logistic support was provided by the various laboratories and personnel of Defence Research and Development Organisation (DRDO).

The Agni II, which has already been inducted into service, has a range in excess of 2,000 km and is part of a triad of ballistic missile systems which includes the 700 km range Agni I and the 3000+ km Agni III. The Agni-II missile, whose first operational variant was test-fired in April 1999, is 20 metres in length and 1.3 metres in diameter, weighs 16 tonnes and can deliver one tonne nuclear payload over a distance in excess of 2,500 km. 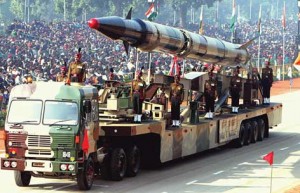 The rail mobile launcher for the Agni II uses a standard broad gauge rail system. The missile is also road-mobile. These features reduce vulnerability and provide greater operational flexibility. Rail mobility will facilitate easy deployment of the missile system in the North East from where the missile can hit deeper into China, though without reaching important cities and industrial centres such as Beijing which are over 3000 km away.