In one of the largest contracts in military history, the US Air Force has awarded Boeing a contract for 179 new refuelling planes. The last round of bidding had resulted in EADS winning the contract before the award was snatched away from them on a technicality. After being locked in a decade-long battle with Boeing Company over a $35 billion refuelling tanker contract, European defence conglomerate EADS has decided not to challenge the Pentagon decision to award the contract to its rival. 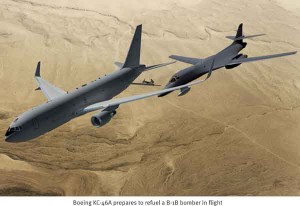 The deal is expected to provide an estimated 50,000 jobs, a factor which made it one of the most politicised decisions ever in the history of weapons contracts with Congressional representatives weighing in on the decision-making process in favour of their constituency interests.

The USAF’s 500-strong tanker fleet is almost dangerously out of date with many of the refitted Boeing 707s at least five decades old and among the oldest jets still flying. The entire tanker fleet is expected to be replaced over the next 10 to 20 years and follow-on tenders are expected to be issued over subsequent decades for a total of up to $100 billion. The first 18 of 179 planes, to be called KC-46A tankers, are to be delivered by 2017.