US sanctions on Iran can hamper World Peace 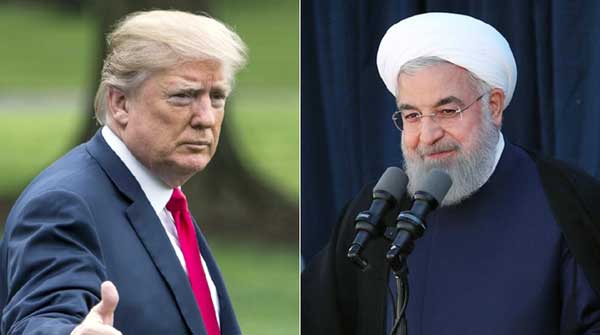 The reasons offered by President Donald Trump for his abrupt withdrawal from the Joint Comprehensive Plan of Action (JCPOA) i.e. the Iran nuclear deal on May 8, 2018- were many, such as,

•  Its sunset clause (the deadline date given to Tehran providing it the liberty to free itself from the contractual bindings imposed by the JCPOA,

•  Because an anti-Iran initiative, such as the above, would, ostensibly be construed to be anti-Obama, after all, it was during the Obama presidentship that the accord was signed.

•  Reneging from the accord, would portray the Democrats and President Obama as having taken an anti-US decision, and resultantly, enhancing President Trump’s image by showing him as a no-nonsense, business like president, and

•  Since Trump, through this move, would be acting on his campaign commitment.

Of course, the above stance also assuaged the sentiments of the pro-Jewish lobby in the US — which, invariably reaps dividends for any political dispensation in the US. Trump had all along been saying “no deal is better than a bad deal” Therefore, he was compelled to withdraw from the ‘bad deal’

However, each of the reasons which seek to rationalize this ill-thought out move by Trump can be squarely demolished by very strong arguments.

Let us examine them, one by one. The timeline for the Sun set clause was set at the end of 2025. However, until 2030- the level of enrichment would necessarily have to be restricted to 3.67 percent, this limit is far below the 90 percent needed for weapons grade uranium. According to the International Atomic Energy Agency (IAEA) the watch dog which monitors and certifies Iran’s compliance with the conditions of JCPOA, Iran had all along been in strict compliance of the terms mandated by the accord.

As regards the US attempting to secure plaudits from Israel, Saudi Arabia and the other US allies, it needs hardly any underscoring that, as a matter of the best geo-strategic gains for the US-it would have been prudent for the latter not to withdraw from the deal- since that would have implied stricter US sanctions not being imposed in Iran. These stricter sanctions have wrecked havoc on international hydrocarbon price stability. The financial implications for nations having commercial ties with Iran have resulted in economic disaster for them. European Union, for example, has already devised a financial mechanism for overcoming conditions, which hamper trade and commercial ties. It has decided to change over from the SWIFT mode of trade transaction settlements, to a new barter based model termed INSTEX (Instrument in Support of Trade Exchanges) SWIFT payments between nations enable fund transfer via a SWIFT International Payment Network (SIPN) which, in turn, uses the financial vehicle Transferwise, which is so structured, that payments are made in a secured, standardized and reliable environment. The above mentioned three attributes are absolutely crucial in commercial transactions.

INSTEX set up by Germany, France and UK with the sole objective of overcoming the adverse impact of US sanctions on Iran, is a Euro dominated financial vehicle which operates outside the US financial system, and is essentially facilitated by barter trade.

But the fact that nations financially bypassing the US through these alternate means of payment mechanisms, by itself lend themselves to draining out a sizable chunk of revenues for the US –hence US imposed sanctions, beg the question whether it was financially prudent for it to sanction Iran, consequent upon undoing the accord. Though, the US would argue, it made sense because the ‘lifting of Iran sanctions’ was linked to JCPOA.

The act of the US dispatching an aircraft carrier with B52 bombers in close proximity to Iran provoked the latest attacks on Saudi tankers in the Strait of Hormuz by anti-US elements. Iran has not yet claimed the responsibility for the attack on Saudi tankers, since, as a matter of utmost caution, it would prefer to avoid a confrontation with the US.

Surprisingly, even President Trump would like Tehran to come to a dialogue table facilitated through multilateral channels to enable Iran to modify the terms of JCPOA, to render it more in sync with the present US administration’s requirements.

Brian Hook State Department’s Special Representative for Iran has said very recently at the Centre for Strategic and International Studies “ if the clerics of Tehran choose, as the Iranian people are demanding , to play by the rules, respect the sovereignty of Iran’s neighbours and abide by international obligations and commitments the US will be ready and willing to engage. “

Iran is firmly convinced that the above is just a ploy and even such parleys can hardly be taken seriously. Iran has taken valuable lessons from the US-North Korea talks. President Trump far from softening the sanctions on North Korea, has become more hawkish on Pyongyang. It is due to the above that North Korea after a long spell of ‘good behaviour’ has resumed its missile launches.

Some hawkish functionaries of the US administration such as Secretary of State Mike Pompeo and the National Security Advisor John R. Bolton carry immense clout with President Trump and he, generally, does not brush aside their views on Iran (these two officials had taken an uncompromising stand on Iran) Fortunately, as per the latest reports, good sense has prevailed and Trump has told Patrick Shanahan the Acting Defence Secretary, that he does not want a war with Iran.

As a matter of fact the US administration has deputed officials to meet the Sultan of Oman in order to ensure, that this explosive situation may be diffused.

US hopes Iran stridently ensures that its support to the Houthi rebels in Yemen and Hezbollah operating in many countries of West Asia is brought to an immediate halt.

One thought on “US sanctions on Iran can hamper World Peace”