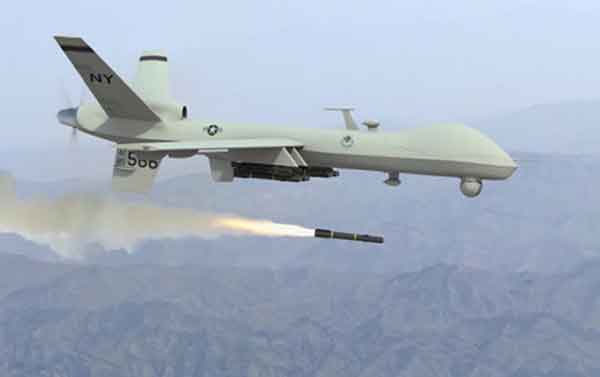 Since 2004, the United States has made hundreds of attacks on targets in northwest Pakistan using drones (unmanned aerial vehicles) controlled by the CIA’s Special Activities Division. Some parts of the media refer to the series of attacks as a “drone war.” The covert program has become a flashpoint for tension between the United States and Pakistan.

In Pakistan, the strikes are often linked to the mushrooming of anti-American sentiment in Pakistan and have opened the scope and extent of CIA activities in the country to question. As a result, Islamabad publicly condemns the attacks. But, at the same time, it is evident that Islamabad has also secretly shared intelligence with the United States and allegedly allowed the drones to operate from within the country.

Islamabad denies the group’s presence on Pakistani soil, but Washington pays little attention to such denials and retaliates by using drones…

Reports that there was a secret deal between the United States and Pakistan permitting the drone attacks surfaced as early as 4 October 2008, in the Washington Post. In February 2009, U.S. senator Dianne Feinstein (D-Calif.), chairperson of the U.S. Senate Select Committee on Intelligence, said, “As I understand it, these are flown out of a Pakistani base.” Pakistan’s foreign minister, Shah Mehmood Qureshi, denied this.

However, according to secret diplomatic cables leaked by Wikileaks, Pakistan army chief Ashfaq Parvez Kayani not only tacitly agreed to the drone flights but also, in 2008, requested the Americans to increase them. Yet today, Pakistan interior minister Rehman Malik claims the drone missiles cause too much collateral damage. A few militants get killed, but the majority of victims are innocent citizens, says Malik.

Barack Obama vastly accelerated the drone program after becoming U.S. president in 2009. A list of the high-ranking victims of the drones was provided to Pakistan in that year, and the Obama administration broadened the attacks to include targets seeking to destabilise Pakistani civilian government. For instance, the attacks of 14 and 16 February 2009 targeted training camps run by Baitullah Mehsud, the then chief of the Tehrik-e-Taliban Pakistan (TTP).

More recently, since abandoning the counterinsurgency policy adopted briefly during 2010–2011, when General Stanley McChrystal headed the ISAF in Afghanistan, the United States and NATO, under General Petreaus and then General John Allen, have repositioned a large contingent of troops in eastern Afghanistan to carry out counterterrorist attacks on the Taliban and other insurgents operating from bases inside Pakistan’s tribal area—North and South Waziristan, in particular. After the killing of Osama bin Laden, the United States turned its attention to the Haqqani network, now considered the most lethal foe the ISAF troops face and based, according to Washington, in Pakistan’s North Waziristan tribal area.

Islamabad denies the group’s presence on Pakistani soil, but Washington pays little attention to such denials and retaliates by using drones to go after the network members. At his final appearance before the Senate Armed Services Committee on 22 September 2011, before he retired, U.S. chairman of the Joint Chiefs of Staff, Admiral Mike Mullen, stated that the Haqqani terror network “acts as a veritable arm of Pakistan’s Inter-Services Intelligence Agency.” Admiral Mullen’s statement had been said in private earlier, but before that day, had never been put on the record by a senior U.S. official.

A day later, in an article, “A New al-Qaeda in Pakistan,” in Daily Beast, Tara McKelvey wrote, “The Americans fear that the Haqqanis have become increasingly lethal and effective in the region, even as the U.S. thins out al-Qaeda’s top leadership and capabilities. The main difference is that the Haqqanis don’t aspire to global action; they are focused solely on their power base in Southern Asia. But aided by ISI, they could become an increasing menace in the region, on par with al-Qaeda.” American officials have long accused the Pakistani military of having ties with terrorists, and they reportedly discussed the Haqqani fighters with Lieutenant General Ahmed Shuja Pasha, the head of the ISI, pointed out McKelvey during one of his 2011 visits to Washington.

The founder of the network, Jalaluddin Haqqani, once helped assemble mujahideen fighters who stood up against the Soviet army in Afghanistan, and he served as minister of tribal affairs for the Taliban. After the Americans invaded Afghanistan, he turned around and set his fighters against the U.S. troops. Today, the network has between 4,000 and 12,000 fighters, reports the New York Times, and it is run by Haqqani’s 36-year-old son, Sirajuddin.

Miramshah serves as the headquarters of the al-Qaeda–linked Haqqani network,

One of the targets of U.S. drone-fired missiles is the bazaar of Miramshah, the main town in North Waziristan. “Miramshah serves as the headquarters of the al-Qaeda–linked Haqqani network, a powerful Taliban subgroup that operates in both Afghanistan and Pakistan and is supported by Pakistan’s military and its Inter-Services Intelligence (ISI) directorate,” says Bill Roggio in the Long War Journal on 14 June 2012. “The town serves as one of the ‘ground zeros’ of terror groups based in North Waziristan, a U.S. intelligence official has told the Long War Journal. Other main centers of terror activity in North Waziristan include Datta Khel, Mir Ali and the Shawal Valley.”

The first drone attack on Miramshah on record took place on 17 March 2010 and killed Sadam Hussein Al Hussami, also known as Ghazwan al Yemeni, and three other al-Qaeda operatives. Hussami was a protégé of Abu Khabab al Masri, al-Qaeda’s top bomb maker and weapons of mass destruction chief, who was killed in a U.S. airstrike in South Waziristan in July 2008. Hussami was training al-Qaeda and Taliban fighters to conduct attacks in Afghanistan and outside the region and was a key planner in the suicide attack on Combat Outpost Chapman that that killed seven CIA officials and a Jordanian intelligence officer. The slain intelligence operatives were involved in gathering intelligence for the hunt for al-Qaeda and Taliban leaders along the Afghan–Pakistan border, Roggio said.

Mansoor ran training camps in the area and sent fighters to battle NATO and Afghan forces across the border.

The next strike on the bazaar took place almost two years later, on 8 February 2012, when the United States killed Badr Mansoor, a senior Taliban and al-Qaeda leader. Mansoor ran training camps in the area and sent fighters to battle NATO and Afghan forces across the border. He also linked up members of the Harkat-ul-Mujahideen with al-Qaeda to fight in Afghanistan. Osama bin Laden described Mansoor as one of several commanders of al-Qaeda’s “companies” operating in the tribal areas. He was later promoted to lead al-Qaeda’s forces in the tribal areas. In very recent days, U.S. Predator/Reaper drones have begun pounding the Miramshah bazaar once again, killing militants and some civilians as well.