Patience and persistence are required for businesses to succeed in the Indian market. The same is true as to the bilateral security relationship, between the US and India. Taking the longer view, the security objectives of India, and the US, in the South Asia region, are characterised more by identity and similarity than by difference or rivalry. If these propositions are correct, such market forces will move both nations towards cooperation and mutual reliance, and existing bilateral barriers will be overcome in time. 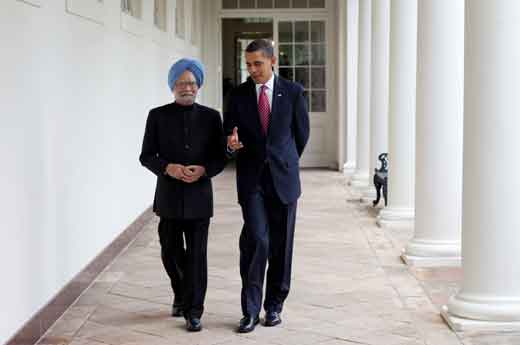 As a rising power, India already has assumed important responsibilities for regional security. Its role and prominence will grow, as will its defence expenditures. The United States is paying special attention to India. The 2012 US Defence Strategic Guidance explicitly acknowledges the necessity to ‘rebalance’ US security resources towards the Asia-Pacific region, as the withdrawal of US combat forces from Iraq and Afghanistan proceeds. India is the only country that the US specifically identifies as a key strategic partner:

“We will also expand our networks of cooperation with emerging partners throughout the Asia-Pacific to ensure collective capability and capacity for securing common interests. The United States is also investing in a long-term strategic partnership with India to support its ability to serve as a regional economic anchor and provider of security in the broader Indian Ocean Region.”

The particulars of the phrasing are important. The US Government speaks to ‘investment’ in a ‘strategic partnership’ intended to support India’s ability to uphold regional security. A ‘partnership’ implies a relationship among peers which serves the interest of each. India has embarked upon a multi-year program to improve its defence capabilities. The metrics are impressive. Since 2001, India’s defence spending has risen by more than 60 per cent to $36 billion in 2011 – 2012. Between the years 2007 and 2011, India signed $35.6 billion in defence contracts. Some forecasts project $100 billion in military purchases over the next ten years, of which 50 per cent (or more) may be sourced from foreign vendors. While India has made indigenisation a national priority, that is a long-term proposition. In the near term, India remains a leading market opportunity for US and other foreign suppliers.

For the US government, however, India is more than an arms customer. As is evident from the Strategic Guidance Document, the US looks for a ‘partnership’ with India to support long-term stability in the region and protect mutual security interests. That partnership proceeds without an alliance relationship but is driven by common interests.

On the surface, great progress has been made in the relationship. The United States is now the largest defence supplier to India. American companies have received $12 billion in contracts from the Government of India – a 34 per cent share since 2007. Yet when examined more carefully, there are key points of frustration and limitation which need to be better understood and addressed incrementally, to mutual benefit.

By dollar value, most US sales to India have been through the government-to-government (FMS) route. Yet both the US and India are far from satisfied. Among criticisms attributed to India – FMS letters of offer are not fully responsive to the competition sought by India’s Defence Procurement Procedure (DPP), India has insufficient contractual leverage over the supplier as an FMS agreement is with the US Government and that the FMS adds costs for functions that India does not desire. The US view is that India may not accurately portray FMS or fairly appreciate its advantages.

American companies have received $12 billion in contracts from the Government of India.

The DPP and FMS serve very different purposes. The principal objective of the DPP is to assure that the Government of India can conduct defence acquisition of approved requirements through transparent means which produce the lowest cost, technically compliant bid among at least two qualifying offers. FMS, in contrast, exists to serve the security assistance objectives of the United States and its allies. It employs the US federal acquisition process, developed over many years, and often operates from the very different paradigm of ‘best value’, where the US regularly performs a ‘cost-technical’ trade to decide whether superior performance justifies a higher price. The DPP works from an equally legitimate but fundamentally different premise.

While friction between the FMS and DPP thus is inevitable, both India and the US should continue to make selective use of FMS wherever mutually advantageous. Although it can suffer from lethargic processing in the US bureaucracy, FMS deals get done. FMS benefits from the full faith and credit of the US Government behind FMS agreements, the potential availability of financing where a ‘dependable undertaking’ is obtained, high confidence in integrity as a consequence of US compliance mechanisms, and the assurance of life cycle system support. By reducing payment risk to the US supplier, there are potentially lower costs to India as a buyer. Although the US Government purchases supplies or services for the benefit of India, it employs many rigorous systems to assure that the price is fair and reasonable. Where more sensitive technologies are implicated, FMS will be the only vehicle as direct commercial sales may not be authorised. Where India’s priorities warrant, it also can use FMS to purchase subsystems and hardware (and defence services) from lower tier US suppliers.

Both the US and India can act to improve the match between FMS and India’s defense requirements.

Both the US and India can act to improve the match between FMS and India’s defence requirements. US agencies with key FMS case responsibilities, including the Defence Security Cooperation Agency (DSCA), Directorate of Defence Trade Controls (DDTC), and Defence Technology Security Administration (DTSA), can give priority to FMS cases for India. The US Government can commit greater resources to support the Office of Defence Cooperation (ODC) at the US Embassy in New Delhi, as the ODC is a key interface between the potential requirements of India and the Letter of Request (LOR), which formally begins an FMS case. These steps would help close a perceived gap between the priority given India in US pronouncements, such as the Strategic Guidance, and actual practice as evidenced in responsiveness, resources committed and timely actions. At the same time, India can be encouraged to make adjustments to the DPP as will better reconcile it to enable US companies to compete with FMS offers.

Some American companies have complained of fatigue with the DPP process that India uses for Direct Commercial Sales (DCS). This ‘fatigue factor’ is of concern as it may prompt some capable firms not to participate in DPP competition. US firms view the DPP as unwieldy and uncertain. Because of the ‘No Cost, No Commitment’ trials requirement, vendor participation can be expensive. Award is made to the Lowest Price (L1) bidder who satisfies minimum technical requirements, without performance discrimination as in US ‘best value’ determinations. In India, DPP procurements typically take a very long time to fructify. As US companies must answer to corporate directors, even top-tier companies worry about the return on investment in DPP competitions. Should they withdraw from the market, as is a genuine possibility, India would have fewer and potentially inferior alternatives and solutions for its key operational requirements.

India can demonstrate the DPP is effective by completing pending selections and awarding contracts long in gestation.

The DPP, however, is a work in progress. India is relatively new to the global defence marketplace, as the DPP was first introduced in 2002 and then subsequently amended in 2003, 2005, 2006, 2008, 2009 and 2011. As India is developing its acquisition workforce, resource limitations help explain why the DPP is rule-driven rather than encouraging exercise of discretion by contracting officials. Discretionary contracting functions are more stressful on a limited base of acquisition professionals. Excess ‘play in the joints’ risks error and is more susceptible to improper influence, bias or corruption. Thus, there is context and cause for the DPP’s particular approach. With time and experience, execution of the DPP procurements is bound to improve. In any event, the DPP exists for India’s benefit not for any vendor from any country. US firms would be well counseled to work (as they have) with international organisations to promote best practices in defence acquisition that will help India to get better results from the DPP.

India benefits from full and fair competition and that is promoted by a functional procurement system which encourages vendor participation from multiple qualified vendors. Ultimately, the purpose of any acquisition methodology is to provide a government end user with supplies or services that it requires. Indeed, the DPP’s stated aim is to ensure the ‘expeditious procurement of the approved requirements of the Armed Forces.’ Unfortunately, the record of recent years is that the DPP has disappointed those who ‘own’ the requirements and seek supplies and services. As is true of any country, when acquisition practices fail in their purpose, the result is delay or denial of national objectives.

India has made many recent, major purchases outside the DPP, through Inter-Governmental Agreement (IGA) such as an FMS purchase. India can reduce its use of IGAs as it further improves the DPP. India can demonstrate the DPP is effective by completing pending selections and awarding contracts long in gestation. India also can improve supplier willingness to bid, and expedite the closure process on contract negotiations, by aligning key contract terms such as financing of performance, payment and limitation of liability to international commercial norms.

There continues to be a ‘trust deficit’ that constrains India’s willingness to rely on the US for critical defence items. This reflects several historical examples of export sanctions imposed by the US upon India, most recently in 1998. Doubts as to the outcome of the US export control processes persist. At the commercial level, the result favors bidders from countries such as Russia, France or Israel with less restrictive technology transfer rules.

US export controls and technology release policies exist to serve a variety of functions and policies, and US agencies must adhere to statutory mandates and respect Congressional prerogatives. The US must conform to the Arms Export Control Act (AECA), which limits retransfer of munitions and imposes various measures which condition or accompany military sales or other defence transfers. For example, Section 41A of the AECA requires end use monitoring of defence articles and services sold, leased or exported. The US Government has little or no discretion as concern statutory requirements. However advantageous a particular sale might appear to be, rules cannot be bent as a matter of security policy or industrial objective. At the same time, the US should continue export reform initiatives which, if successful, will control fewer items and promote certainty and more speed in licensing decisions.

Robert S Metzger is a lawyer in private practice with the law firm of Rogers Joseph O’Donnell, PC and is a former Research Fellow at the Centre for Science & International Affairs, John F Kennedy School of Government, Harvard University. He is a member of the International Institute of Strategic Studies.

One thought on “US-India Defence Cooperation towards an Enduring Relationship”