Home  >  News  > Geopolitics  >  US drawdown from Afghanistan and Its Implications

US drawdown from Afghanistan and Its Implications 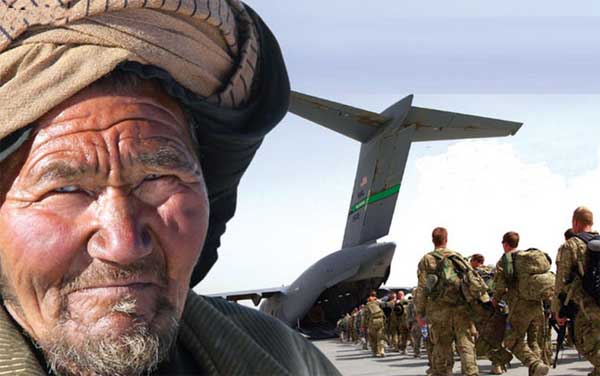 Former Pakistan president General Pervez Musharraf made a far-fetched and sweeping generalisation when he stated, ‘The worst blunder for the US would be to quit Afghanistan without winning, in such a situation militancy would prevail, not only in Pakistan, India and Kashmir, but perhaps also in Europe, the UK and the US.’1

Musharraf’s statement is far-fetched because this assertion fails to recognise the existing ground realities which have seen significant political and military changes in the region: the recently held election in Indian held Kashmir – which has undermined the separatists – and India’s befitting response to Pakistan’s firing across the line of control and the international border besides the international community refusing to heed Pakistan’s urges to internationalise the Kashmir issue.

Taliban is without doubt the principal stumbling block for peace and stability in Afghanistan, but this notorious network is not the only cause for worry. The warlords, the drug mafia, transport lobbies, the timber mafia, and the security companies (both local and foreign) all contribute in a small or big way to put Afghanistan in a perennial state of unrest.

Violence against the helpless, atrocities against women and children, a parallel system of justice and skewed economic and social betterment are malignant enough not merely to arrest the pace of reforms but also to put this ravaged nation into a regressive trajectory. This has caused much anxiety around the globe. It is, therefore, heartening that President Obama and his advisors had begun to critically analyse the likely adverse effects of an early drawdown.

As a matter of fact, the November 2010 NATO Lisbon summit also included a long-term agreement between the 28-member transatlantic alliance and Afghanistan, which contained terms that permit long-term NATO presence in Afghanistan, even beyond the committed outer deadline of 2014 end, should the situation so demand, as has indeed been proven right since a residual US-led NATO combat role has been endorsed by the US, NATO and Afghanistan, which the US reasoned out as the right stand in the wake of its experience in the Iraq war, from which it exited prematurely without sorting out the unresolved issues. The premature withdrawal, however, was forced on the US since the latter was not permitted by the then political dispensation to continue to remain.

Peter Berger commented, ‘Taliban detainees have told their US interrogators that the prospect of fighting for another four long years is sapping their morale…’

Four months after the November 2010 NATO Lisbon summit, which permitted long-term NATO presence in Afghanistan, analysts such as Peter Berger commented, ‘Taliban detainees have told their US interrogators that the prospect of fighting for another four long years is sapping their morale. And more years on the clock will allow the build up of a much larger and more effective Afghan National Army- one that is more capable of resisting the Taliban- while giving Afghan politicians sufficient time to organize to defeat the Karzai mafia, which now dominates the country.’2

Under normal circumstances, an arrogant Taliban could dare to cock a snook even at the mighty US, which, in the immediate aftermath and as a consequence of 9/11, demanded from the former (a) the handover of the dreaded fugitive Osama bin Laden, (b) the dismantling of elements of al-Qaeda and the Taliban and (c) for the political establishment to eschew terror. Instead of brazen defiance, which would ordinarily be expected from an America-hating Taliban, the response from the Taliban chief Mulla Omar was offering concocted flimsy excuses for being unable to comply with the US demands – the Taliban pleaded ignorance regarding the precise whereabouts of bin Laden and tried to impress upon the US that it did not support terror. In other words, the US threat did, after all, unnerve the Taliban. Otherwise, it would most likely have warned the US not to interfere in the internal affairs of the landlocked country. Notwithstanding the above, the Taliban has continued fighting the US-led NATO force overtly and covertly –which it was quite capable of doing in an unwieldy country that for centuries had been the graveyard of foreign invaders.

‘The Taliban regime had come close to gaining total control of the country by 2001, it had only done so by increasing the numbers of Pakistanis, Arabs and other foreign fighters in its ranks. Afghans resented such outward interference in their affairs, particularly the common Pakistani boast that, Afghanistan had become its fifth province.’3

But the December 1999 hijack of an Indian Airlines plane IC814 by the Pakistani terror outfit Harkat ul Mujahideen, which took off from Kathmandu and eventually was forced to land at Kandahar, did offer substantial evidence of Pakistan treating the then Taliban-ruled Afghanistan, as Barfield rightly says, its own fifth province. The entire sordid sequence of events was testimony to Islamabad’s complicity and Afghanistan’s role of playing second fiddle.

As per the prevailing situation, the international forces have been able to dislodge and evict the Taliban from a few zones…

As regards Osama bin Laden, he, as per news reports, was whisked away from the mountains of Tora Bora to a safe haven by Gulbuddin Hekmatyar, the founder of Hezb-e-Islami (a political party and a paramilitary group) well ahead of the US invasion of Afghanistan. This was confirmed by CNN and other TV news channels, including the BBC. The US had designated Hekmatyar a ‘specially designated global terrorist’. According to Noman Benotman (senior analyst at the Quilliam Foundation – a UK counterterrorism think tank), Osama bin Laden’s escape strategy was meticulously planned and very skilfully executed with the utmost secrecy to ensure that many parties chasing his likely escape route, tempted by the $25 million prize money placed by the US on his head, are prevented from getting a scent of his movement.4

As per the prevailing situation, the international forces have been able to dislodge and evict the Taliban from a few zones, including in key areas of Helmand and Kandahar. However, this has been at the cost of increasing the Taliban’s influence in the west and north of the country. In Helmand province, it took the Afghan security forces three days to expel Taliban fighters, who just a few days earlier had overrun Camp Bastion, the former British and American base handed over to the Afghan security forces about a month earlier. Said a former UK army chief General Mike Jackson that Britain had pulled combat troops out of Afghanistan too early because of political considerations at home.

The past few weeks have seen an attack on a British embassy convoy that killed a G4S security guard. As per news reports, as of the end of November 2014, even Kabul has witnessed a spate of daring attacks by the Taliban. Kabul’s police chief General Mohammad Zahir was asked to step down in the wake of several high-profile attacks taking the lives of Afghans, as well as foreigners. Immediately thereafter, it was felt by high-ranking officials that this resignation may bring about an umbrage among the ranks of the police, besides resulting in a disruption in the smooth functioning of the force – hence, the police chief was reinstated. What is worrying is the audacity with which the Taliban spokesman Zabihullah Mujahid has claimed that Taliban is solely responsible for the attack. All this goes to prove that portends are ominous, to say the least.

India will also need to step up its intelligence vis-à-vis Pakistan to make sure that the latter does not become a catalyst for attacks against India.

Threat to India in the Wake of the Drawdown

Unchecked, or relatively less checked, without US-led monitoring, anti- India forces in Afghanistan could become more brazen about attacking Indian assets/interests in Afghanistan. Diplomatic missions, in particular, therefore, need to enhance their security. The Haqqani network is a persistent threat to India. India will need to work very closely with the Afghan intelligence and security establishment. While, on the one hand, such a measure will seek to make Indian interests in Afghanistan more secure, it will also enable India to pick up signals of likely threats to India. Needless to say, India will also need to step up its intelligence vis à vis Pakistan to make sure that the latter does not become a catalyst for attacks against India.

It was politically prudent for Afghanistan and India to have entered into a strategic partnership agreement on 4 October 2011, during a visit to Delhi by the former Afghanistan president Hamid Karzai.

The agreement is suitably structured to gear the preparedness of the two nations to face the challenges posed by the US drawdown. Prime Minister Manmohan Singh assured Afghanistan thus:

‘India will stand by the people of Afghanistan as they prepare to assume the responsibility for their governance and security after the withdrawal of international forces in 2014.’

The Taliban was clearly disinterested in talks, and militants aligned with the Taliban were attacking national assets, such as Karachi Airport.

The politico-security component envisaged in the accord is a safeguard against any potential threat to either country. The accord also has a ‘Partnership Council’ at the foreign minister’s level, with four separate joint working groups, one each on political and security consultations, trade and economic cooperation, capacity development and education. In addition, social, cultural and civil society interactions will be proactively worked upon. India and Afghanistan have been cooperating for the last 10 years. India has provided nearly $1.5 billion worth of assistance and trained a large number of Afghans, including their police personnel. The accord facilitates a stepped up programme of people-to-people contacts.

There had always been widespread acknowledgement in Pakistan for evolving a suitable strategy to deal with militancy in North Waziristan. However, Prime Minister Nawaz Sharif’s party, Pakistan Muslim League (Nawaz) (PML-N), as also cricketer-turned-politician Imran Khan’s party, Pakistan Tehreek e Insaaf (PTI), had serious differences with the military on the subject. The above-mentioned political parties were initially quite optimistic that differences between the militants and the government can be resolved through negotiations. But a series of developments subsequently undermined such over optimism. The Taliban was clearly disinterested in talks, and militants aligned with the Taliban were attacking national assets, such as Karachi International Airport.