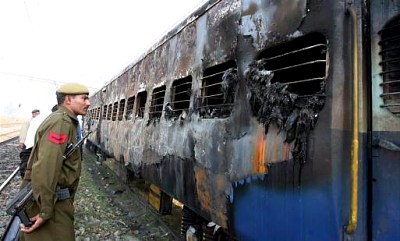 The Samjhauta Express blast has been named by the NIA and UPA government as the work of Hindu terrorists. This writer has no doubt that Hindu terrorism exists, although to hyphenate its limited impact with global jihad is laughable.

“On one hand we are trying to bring peace in this country. We are also taking steps against injustice to minorities as also against infiltration. But, in the midst of all this, we have got an investigation report that be it the RSS or BJP, their training camps are promoting Hindu terrorism. We are keeping a strict vigil on all this.”

This was a truly extraordinary statement made by the nation’s Home Minister. One is sure that as a cabinet minister he chose his words with care and knew the implications of what he said. He could not be referring to self-defense training which cannot be termed terrorist. Obviously there had to be tangible evidence of RSS and BJP organizationally connected to terrorist acts for Mr. Shinde’s statement to be validated. The first obvious question is why the government has not acted against RSS and BJP if these organizations are promoting terrorism. If Mr. Shinde’s assertion is correct the government’s inaction reveals serious dereliction of duty demanding its dismissal.

That Mr. Shinde was serious was soon confirmed by his cabinet colleague Foreign Minister Mr. Salman Khurshid who told media:

“Let me just say this to you very clearly that our stated position, that is shared fully by the home minister and past home minister, is based entirely on facts as the investigative agencies have made available to the government.”

Mr. Khurshid apparently was referring to the reports submitted by the National Investigation Agency (NIA) to the Home Ministry. The Home Secretary Mr. RK Singh said: “Yes, there is evidence. We have names of at least 10 persons involved in the Samjhauta Express, Mecca Masjid and Ajmer Dargah Sharif blasts who were associated with RSS at some point or other.” The NIA has however clarified that “there was no concrete evidence to suggest that RSS or BJP were directly involved in terror training”.

How then, could the UPA cabinet ministers go public with serious charges of promoting terrorism against the nation’s major opposition party?
The answer to that most likely lies in the fact that the Samjhauta Express blast has been named by the NIA and UPA government as the work of Hindu terrorists. This writer has no doubt that Hindu terrorism exists, although to hyphenate its limited impact with global jihad is laughable. But the role of Hindu terrorists participating in the Samjhauta Express blast is what is difficult to swallow. And the government’s persistence to continue with this allegation is what raises a most disturbing doubt about its own integrity. Readers might recall that this writer has on six occasions pointed out in these columns the glaring contradiction related to the allegation of a Hindu hand in the Samjhauta blast which refuses to be addressed by the government, opposition, the courts or mainstream media.

The charge against Aseemanand is based upon his confession. However his lawyer had alleged that his client had confessed to his role in the Samjhauta Express bomb blast under police duress. It has been repeatedly asked in these columns that the government provide a satisfactory rebuttal of this charge.

The contradiction arises from the United Nations Security Council (UNSC) 1267 Committee which ordered sanctions on Al Qaeda and Taliban stating also in its press statement that Lashkar-e-Toiba (LeT) perpetrated “train bombing in Mumbai, India, and the February 2007 Samjhauta Express bombing in Panipat, India”. Further, precisely because of the LeT responsibility for the Samjhauta terror the UN imposed sanctions against the person of Hafiz Saeed. It was China that exercised its UN veto to block those sanctions and protect Hafiz Saeed. The question naturally arises. Is the UPA government, along with China, protecting Hafiz Saeed?

“Hindu terror against Indian Muslims is on a different footing from terror against Pakistani citizens. The latter puts India and Pakistan on the same page insofar as cross border terrorism is concerned. The charge against Aseemanand is based upon his confession. However his lawyer had alleged that his client had confessed to his role in the Samjhauta Express bomb blast under police duress. It has been repeatedly asked in these columns that the government provide a satisfactory rebuttal of this charge.”

In other words the suspicion was voiced that by the highly fraudulent hyphenation of India and Pakistan on cross border terrorism the government was promoting a spurious peace dialogue with Islamabad. Was that suspicion far-fetched?

Within hours of Mr. Shinde’s allegations against the RSS and BJP for promoting terror Hafiz Saeed responded from Pakistan. He said:

“Innocent Pakistanis were killed in the Samjhauta Express, Indian colonel was involved and their Home Minister is endorsing the involvement. Shinde has spoken truth finally. World should take notice and declare India a state that is supporting terror on its soil after its Home Minister candidly confesses.”

Mr. Shinde’s speech and its reaction from Hafiz Saeed completely overshadowed the elevation and maiden speech of Mr. Rahul Gandhi in Jaipur. The new Congress Vice President made brave statements about changing the culture and system of this nation.

Does Mr. Rahul Gandhi believe that the UNSC was lying when it accused Hafiz Saeed and LeT of perpetrating the Samjhauta blast? Does he believe that the NIA’s own admission that that “there was no concrete evidence to suggest that RSS or BJP were directly involved in terror training” justified the Home Minister to level his serious and damaging charge against India’s major opposition party?

The nation will watch and wait.

is a veteran columnist, cartoonist and political activist.